At SXSW we got a chance to chat with the cast of Tragedy Girls directed by Tyler MacIntyre. Tragedy Girls follows best friends Sadie and McKayla; who are on a mission to boost their social media fandom as amateur crime reporters hot on the trail of a deranged local serial killer. After they manage to capture the killer and secretly hold him hostage, they realize the best way to get scoops on future victims would be to, you know, murder people themselves. As the Twitter handle @TragedyGirls become an overnight sensation and panic grips their small town, can their friendship survive the strain of national stardom? Will they get caught? Will their accounts get verified? Check out our interview with stars Craig Robinson (Gifted), Alexandra Shipp (X-Men Apocalypse) and Brianna Hildebrand (Deadpool).

Jacquelyn Coley: So, I’m Jacquelyn. I’m with Black Girl Nerds and today we’re at South by Southwest and we’re sitting down with the cast of Tragedy Girls. Brianna Hildebrand, Alexandra Shipp, and Craig Robinson.

Jacquelyn: So, I don’t wanna leave you out on this one Craig, but I’m sitting here with two superheroes. So, I’ve gotta go ahead and say it. Negasonic Teenage Warhead, and then also Storm, and now you ladies are basically slasher girls in Tragedy Girls. So, which one was more difficult, being a superhero or being a slasher girl?

Alexandra: Really I don’t know, that’s such a good question.

Alexandra: Half of it may be a superhero because you have to fit into the suit. But I don’t know…maybe Tragedy Girls. I mean, Tragedy Girls was really fun to shoot, but there were also times when it’s just difficult to have to detach yourself from the person because the person is detached from reality at some points and some points they’re not. That was probably the most difficult part.

Brianna: Yeah, I agree. I feel like we were dealing with … even though it was a warped reality we were dealing more so with reality in Tragedy Girls, whereas with our Marvel characters, I mean a lot of it is like-

Alexandra: Like, it’s not pretend but you’re looking at a green screen and you’re like, “What?” and then the green screen becomes something and then you watch the movie. You’re like “Oh wow, thank God, I pretended that it was something completely different.”

Alexandra: Thank you. Not a lot of people could do that.

Jacquelyn: Talent, talent again. And so, Craig, back at South By for his second time. Is there anything unique about this festival, because you’ve done a ton of films that you feel when you bring a film here, it’s better, different?

Craig: Yeah, just coming to Austin is such a special place audience wise is … In my travels I haven’t seen audiences like this. I mean, and audiences are great everywhere I go, but this, something about Austin they just… they lift you up when you don’t even have the energy. It’s something really special about just being here, which infects this festival.

Jacquelyn: Mm-hmm, Have you seen your meme about Austin, Texas?

Jacquelyn: Okay, I’ll show it to you at the end, but there’s a meme where it says, “People in Austin, Texas party like every damn day is their birthday” and it’s your face, it’s like, “I seen’t it.” so you have to check that one out.

Jacquelyn: And it’s actually a very popular Austin meme that people throw around, so I wanted to make sure I-

Craig: Do not forget to show me that.

Brianna: God, you’re a meme. What an influencer you are.

Jacquelyn: So, Tragedy Girls like I said is… I guess you would call it a modern-day young folk slasher movie? What would you say would be three words to describe the movie to someone if they didn’t know?

Alexandra: It’s a horror comedy about two girls who have a web series about serial killers and their obsession goes a little too far. 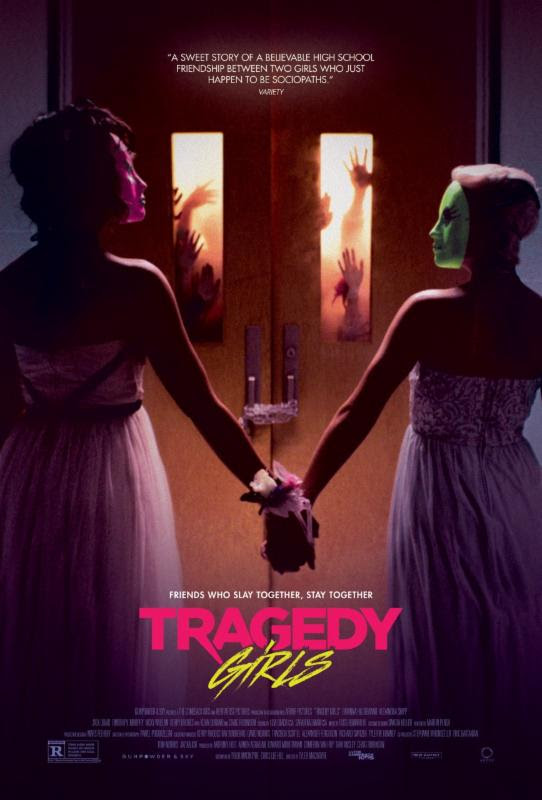 Jacquelyn: Yeah, I would say that’s definitely an understatement. What about you, Brianna, what’s your three-word tagline for the film?

Alexandra: Oh wait was it supposed to be three words?

Brianna: I don’t know, I think that it’s definitely funny … what’s the word? It’s exciting. It definitely keeps you on the edge of your seat, and I don’t know, it’s really suspenseful. I guess there is some suspense in there. I think those are good.

Jacquelyn: What about you Craig?

Jacquelyn: Well, the writing of it is very fresh too. It reminded me very like Diabolo Cody, and very much described I feel like this generation of young females accurately being closer to the age of the characters represented there than I am. Do you feel that it’s a fairly accurate representation of how, maybe not the murderous part, but just the interaction between females of that age and how they interact together?

Brianna: Yeah I feel like girls these days have way more comradery than say I had with girls when I was younger I remember the worst thing that could’ve happened to you is a three-way, and not that good kind, but I think we try and depict these people and granted it’s sometimes a little outlandish and a little satirical but it’s definitely kind of a social comment on how social media can really take you out of reality and yet boost your “fame” people are so obsessed with being famous these days and I don’t think anyone who actually finds it wanted it.

Jacquelyn: Yeah I was gonna say, I’ll turn to that in a second on the split side of it, so how do you guys on your own social media presence. And I’ll start with you Craig, How do you feel, are you a heavy user, medium user, how do you feel about social presence?

Craig: I’m not a heavy user, I have an Instagram with four photos up. Probably don’t know my Instagram password. Twitter, I get on there once in a while, and then Facebook I check all the time, but yeah, I’m not heavy into it. There have been companies that tried to approach me to get followers like you get paid for them to tweet for you and stuff like that. I don’t want that. If I’m saying something I want my people to know it’s coming from me and that kinda thing. I’m not heavy into it, but I’m a part of it.

Brianna: Yeah, I definitely am a moderate user of Twitter. I used to be super into it when I was in high school definitely along the lines of Tragedy Girls. Since then, I’ve calmed down, because I’ve realized all that’s not necessary but it is cool to keep in contact with fans or people that like you, and follow you because they feel they have something in common with you. Whether that be they’re young girls or because of their sexuality or whatever they’re feeling. It’s cool to have that kind of comradery amongst kids that you know maybe see you in a light that you don’t see yourself in, and that you can help them in that way and that’s why I like social media.

Jacquelyn: Very cool, and then as far as you two ladies together your characters have to have this quick shorthand to be best friends. You have to be believable, which you are as best friends. How did you make that quick relationship become believable on screen? I don’t think you guys had a lot of time in the shooting.

Brianna: We had known each other prior.

Alexandra: Yeah, we knew each other a little bit beforehand. We definitely hung out before the movie started. We lived together on the movie, too. Which was really cute, but Brianna’s a cool chick, and I’m a cool chick. And we’re both really chill, and we’re both homebodies, and we both like to play guitars and be weirdos, and I think that it made sense for us as ourselves that we were just chill and hanging out and stuff. But there is something to say about the chemistry in this film, because the reality is you can never create it. It has to just kind of be there and what was beautiful was that everyone really fell into place really nicely and you just can’t force it and you can’t make it. It has to just be there, and we really, I feel like we lucked out. We have really good screen chemistry a lot alike real life chemistry. I don’t hate you, which is nice. It’s nice to work with people that you don’t hate you know-

Craig: Did y’all run lines are the apartment you were staying or were we staying?

Alexandra: Kind of but Brianna and I don’t really need to run … I don’t know, we did it with Tyler, we did our rehearsals with Tyler and then we just showed up and killed it every day pretty much.

Jacquelyn: So, to sum up I’ll just ask. Well, actually I’m going to do this one differently. I really just want to ask you about Deadpool 2. I wanna ask you about anymore X-Men movies, but I can’t do that. So, I’m going to sum it up with this, are there any projects that if you could with your two characters do in the next thing that they do, what would you want to see them do?

Jacquelyn: They can fix the timeline, they always do that.

Brianna: Definitely. Or against each other. Either way it would be really fun.

Alexandra: Or against each other that would be really cool yeah, a little hand to hand.

Brianna: A little hand to hand?

Alexandra: A little hand to hand.

Brianna: A little side action.

Brianna: Well, I wish we had more time to chat. I’m so sorry, but thank you guys so much.

Craig: It was a pleasure.

Alexandra: I get to talk to my black girl nerds all day, I’ll tell you what.