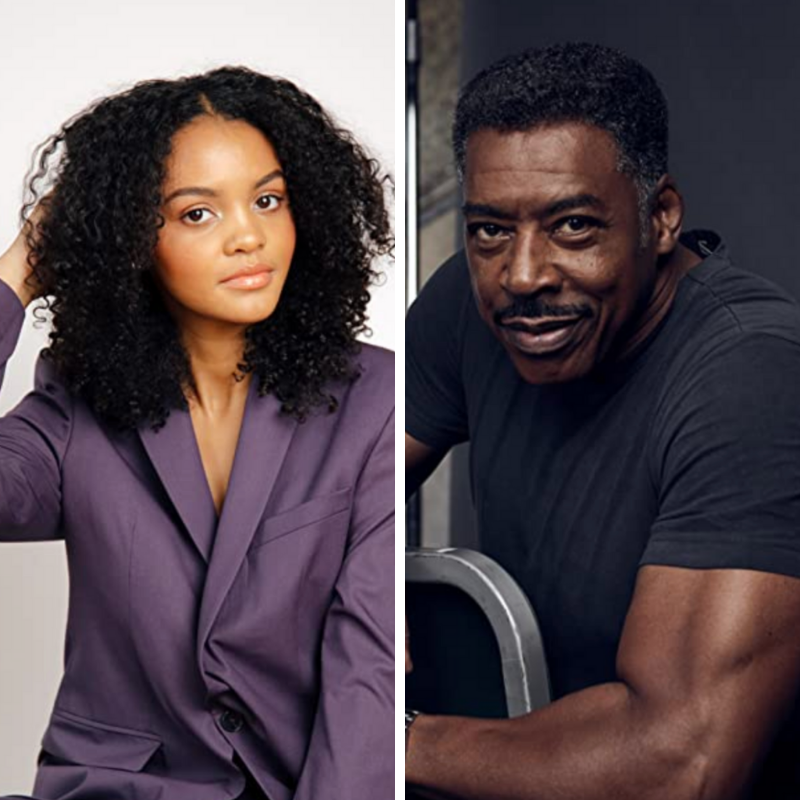 When I signed on to Zoom to speak with Ghostbusters: Afterlife star and OG Ghostbuster Ernie Hudson and costar Celeste O’Connor, Hudson remarked excitedly, “There are Black girl nerds?” I assured him there were a lot of us, and we loved him in the movie.

We’re living in an age where fandom is no longer defined by one race or gender. Black fans, female fans, and fans of every background are being recognized, and we’re starting to see more diversity in projects that historically excluded us.

“How I got the role was kind of a funny story,” Celeste O’Connor explained about booking the role of Lucky, a teenager who works at the local diner. Lucky gains the attention of Trevor (Finn Wolfhard) and somehow gets corralled into the plan of Phoebe (McKenna Grace) to save the day. “I got the audition and it was just a mysterious Sony film. The role just said, ‘Teen Girl.’ I was in school at the time, and I had an exam I had to study for. I messaged my agents if it was okay to pass on it, and they were like, ‘No, you should really do this!’” O’Connor’s agents were usually fine with the actor turning down a role, especially for school. O’Connor was attending the prestigious Johns Hopkins University pursuing a medical degree. When their agents asked them to drop their studies for this role, they knew this had to be a big deal.

“I was like…okay!” O’Connor continued. “I came home from the library and sent in the tape and then you know, amazingly, they loved it. I did a couple of rounds of auditions, and then I went to LA to meet Jason [Reitman, the director] and Finn. Then from there, well you know, we made magic happen.”

I asked Hudson how he got involved with this reboot.

“I see it more as a continuation,” he explained as we tried to find the best phrase for what the movie was. Was it a reboot? A sequel? “The movie five years ago with the ladies, I think they tried to put it in another universe. It was confusing to the fans because it wasn’t an extension. But this directly connects. One of the grandchildren is from the family of one of the Ghostbusters. I think that made it easier to connect. I was happy with the way Jason Reitman wrote and put it together.”

My first foray into Ghostbusters was the 2016 film starring Kristen Wiig, Melissa McCarthy, Kate McKinnon, and Leslie Jones. I was a little too young when the first movies came out and they scared me, so being older I was able to appreciate the campy nature of the film. While the 2016 version was plagued with criticism, I’m thankful for it because it introduced me to the franchise.

O’Connor also remembers being scared of the original films when their father brought them home. After getting the part, though, they rewatched the originals and then rewatched them again in May with their friends. Ghostbusters: Afterlife has an interesting cast, full of young ones to watch. O’Connor fits right in as films like Selah and the Spades and the upcoming The In Between have helped them carve a niche as a current young actor on the rise.

Personally, O’Connor wants to use their platform to advocate for diversity and inclusion. “I love having jobs, but at the same time I think there’s a real need for representation both in front of and behind the camera,” they said.

Jason Reitman is the son of the original Ghostbusters director Ivan Reitman. He’s created a story in which the estranged family of Egon Spengler (played by the late, great Harold Ramis) moves back to a small town where they’ve inherited Spengler’s house after he passes. As the family begin to uncover his secrets, they discover there’s much more to his story than just being a deadbeat dad.

Using revolutionary technology, Reitman was able to recreate scenes using Ramis’ likeness. I asked Hudson how he felt about the tribute.

“I’ve yet to meet someone who said they either didn’t cry or they didn’t want to cry when the old Ghostbusters show up. The tribute to Harold was emotional, and I think the fans had so much love for him. To see that moment in the movie, it just kind of made things right,” Hudson explained. He was also happy to see that Winston was still treated with respect.

Hudson went on to say, “Winston has a moment that gives him dimension that I feel was missing from the first films. I was very very happy. I love the new family, but I was also happy they took a moment and said, ‘Let’s acknowledge this,’ because I think it’s what the fans have been wanting.”

Ghostbusters is an iconic piece of American cinema, and it continues to grow and evolve. I asked Hudson what he’d like the next generations of audiences to take away from the film. He answered thoughtfully, “Ghosts are primal. No matter what age, we all have to say goodbye at some point. But I grew up in a house that believed in ghosts, so it was about facing those fears. It’s scary because you have to face it, but there’s something to facing those fears. That’s what it’s really all about. Some horror movies are so outrageous, but [Ghostbusters] is personal. You don’t have to be afraid, you can laugh.”

Ghostbusters: Afterlife is currently available on Blu-ray and VOD.

‘Ghostbusters: Afterlife’ Picks Through The Rubble