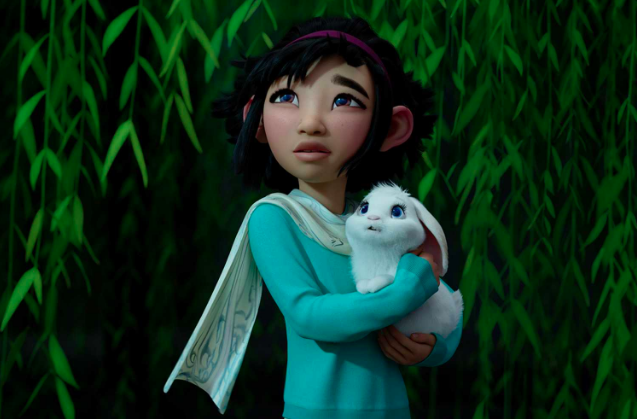 Despite the difficult circumstances of this year, it is a comfort to have films like Over the Moon to remind us that no matter how much we may lose in life, it’s important to cherish what we love.

This 2020 American-Chinese animated film was directed by Glen Keane and co-directed by John Kahrs. It was based on a screenplay by Audrey Wells in collaboration with Alice Wu and Jennifer Yee McDevitt. It was produced by Netflix Animation and Pearl Studio and computer-animated by Sony Pictures Imageworks.

Pearl Studio was created by DreamWorks Animation and a combination of Chinese animation companies. Their partnership was inspired by the joint aspiration to create Chinese-themed animated and live-action films.

Their credits include the 2019 film Abominable and the upcoming film Dragonkeeper. It is exciting to have more authentic representation of Chinese identity in films, especially with the teamwork of such talented and powerful writers. With Over the Moon being so amazing, it’s thrilling to see what may come next.

There are unique feelings of heart, humor, and haunting all woven together so smoothly into Over the Moon. The film features Fei Fei (voiced by Cathy Ang), a fourteen-year-old girl trying to process loss while still believing in the power of love and remembrance.

She is smart, talented, inventive, and funny. Yet, she is still flawed, as she struggles to heal and cope. There is a complexity of musical wonder and deep longing that immediately draws people to her heartfelt tale.

From beginning to end, viewers are emotionally invested, and while some of their investment is in the traditional Disney-like tearjerker way, other moments evoke feelings that are distinctly felt only in this film, and may leave you with chills.

The overall messages of Over the Moon remind audiences that true love is powerful enough to expand far beyond the cosmos as we take a big bite into the uncertain stages of our lives.

Although it feels insurmountably painful to say goodbye to the dreams that have been deferred or even destroyed, this film combines heartful music, culture, soul, and celestial magic to dispel the idea that we only get one dream, one life, and one destiny.

The film combines the whimsical musicality of classic animated movies but with representation that Disney and other animation companies have overlooked for far too long.

The combination of classical Chinese folklore and fantasy with contemporary American Chinese characters and technology makes for a visually stunning film full of color, love, and intrigue.

The film treats everyone to the powerhouse voices of Cathy Ang, Phillipa Soo, Ken Jeong, John Cho, Ruthie Ann Miles, Margaret Cho, Sandra Oh, and more. Soo is famous for her phenomenal role as Eliza Hamilton in the Broadway musical Hamilton. Jeong is well-known for numerous film and television credits, including beloved film Crazy Rich Asians. Cho is an activist and comedian, Oh is iconic for her Grey’s Anatomy role as Cristina Yang, and Miles is a musical theatre actor with many starring roles.

Ang, the star of the film, is a Chinese-Filipina actor and singer who has made her way into so many hearts. While she has credits to her name, Over the Moon has truly spotlighted her talents.

From this film’s compelling story to its voice casting diversity, it is truly a gamechanger when it comes to the accurate representation and promotion of people of color in animation.

For years, white actors have voiced characters of color, often leaving actors of the same ethnicity of the characters out of the story.

It is a joy to see Ang inspire so many people, especially girls of color, to see themselves as beautiful, smart, and courageous both on and off-screen.

It’s even more exciting to see this combination of talents come together and make such a refreshing and captivating film.

As with many animated films, this film connects with audiences of all ages, as there is a lesson for all who watch it. From the importance of moving on with our lives despite adversity to accepting a non-traditional family, there is something that resonates with almost everyone.

With that said, this movie celebrates distinctly cultural traditions and lore. The film masterfully explores the folklore that inspired the Mid-Autumn Moon Festival and why Fei Fei’s family bakes mooncakes.

It teaches viewers about the legend of the moon goddess Chang’e and the archer Houyi, and even mentions the variations of the tale throughout history, as it’s recounted differently by multiple characters in the movie.

The film also features Pixiu, which are mythical hybrid guardian lions, and the Moon Rabbit, which is traditionally known as the rabbit companion of the Moon goddess that gives her the elixir of life.

This movie also mixes the traditional with a lot of new and exciting twists and characters. Fei Fei’s adorable sidekick Bungee more than fills the cute animal requirement for our favorite animated films and is also pretty tenacious.

There is something that resonates so strongly about the film’s approach to exploring grief and change. It captures the frightening truth that there is often no control over how things unravel, but also rejects the idea that unexpected change has to be the demise of our journeys.

It’s easy to keep looking back at the past and to even live there, but the film asserts that existing in yesterday prevents people from growing.

It welcomes cherished memories, but also wants audiences to cherish what they love in all stages of their lives and to know that it’s okay to embrace an unexpected future and to “glow your wonderful.”

We can’t speak for the past or claim we know what the future may hold, but we are definitely feeling inspired, grateful, and dare we say, over the moon for this film in the present.

While the world may feel chaotic, this film gives us all a great opportunity to enjoy every moment we watch and let go of every single distraction. After all, there’s no telling what tomorrow may bring, so we’re loving Fei Fei’s story for all it’s worth today.