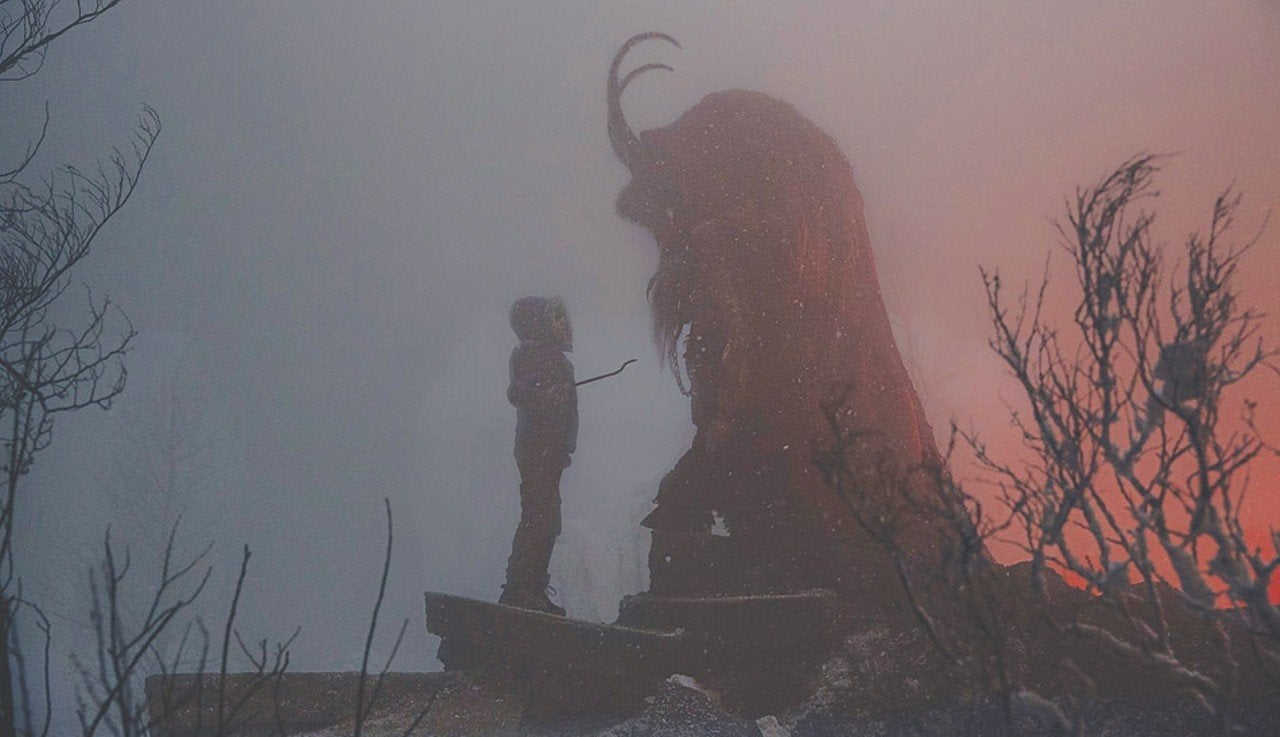 From the imaginative writer-director behind Trick ‘r Treat comes a chilling Christmas tale for the ages. With his second horror feature, Krampus, Michael Dougherty manages to make the holiday scary for reasons other than long lines and mall traffic. But beyond the frights lies — just stay with me on this one — a heartwarming story about innocence, family, and morality.

Before I get into the plot, I want to highlight the film’s title sequence, which is arguably one of the best openings ever. It’s a slow-motion sequence of rabid shoppers clamoring for hot items (a la Zombieland). And what really sells it is that it’s set to Bing Crosby’s “It’s Beginning to Look a Lot Like Christmas,” really hammering home the message that consumerism dominates the holidays.

Thankfully, Max has his Omi (Krista Stadler) to hang out with and give him cookies. Omi puts the Engel family’s heritage on full display with her abundance of traditional Austrian desserts. With their cozy, beautifully decorated home and drool-worthy confections, the Engels know how to do the holidays in style. However, it seems they’re too distracted preparing for Christmas to actually celebrate Christmas.

It isn’t a holiday without obligatory socializing, though, is it? Max’s obnoxious relatives descend upon his home, making the possibility of a good Christmas even more unlikely. Sarah’s sister Linda (Allison Tolman) and brother-in-law Howard (David Koechner) arrive with their four kids and dog, instantly making everything chaotic. They also bring crotchety Aunt Dorothy (Conchata Ferrell), who wasn’t even invited.

This extended family reminds me of the Johnsons in National Lampoon’s Christmas Vacation — trashy and blissfully unaware of their annoying presence. However, twins Stevie (Lolo Owen) and Jordan (Queenie Samuel) are straight up McCallister-level jerks, tormenting their cousin Max just for laughs. Their parents are much less aggressive but still rude. They even briefly forget baby Chrissy in the car, which is a very Home Alone thing for them to do.

The twins read Max’s deeply personal letter to Santa out loud at the dinner table, which is essentially like reading his diary to the whole family. Max is thoroughly embarrassed, and in this moment, he wishes they all would just disappear. He proceeds to rip up his letter and scatter the remnants out of his window. Cue the storm clouds and sudden blizzard.

Of course, the brutal weather traps them all in the house without electricity or phone connections. Twelve people who already hate each other stuck in one place is a nightmare. Tensions were already high and now everyone is ten times more miserable. And this is before they’re terrorized by killer Christmas creatures.

There are different interpretations of Krampus. There’s the version of the anthropomorphic being going around doling out lumps of coal for bad behavior, acting as a bad cop to Santa’s good cop. Dougherty’s Krampus is called the “shadow” of Saint Nicholas and doesn’t seem to hang out with anyone other than the likes of his nightmarish minions — dark elves, monstrous toys, and a big child-eating jack-in-the-box.

Max makes a (completely understandable) wish and unknowingly summons Krampus. The consequences of his wish play out over the days leading up to Christmas. Honestly, blame should be passed to Stevie and Jordan for being the absolute worst. I mean, their teasing is the reason Max’s spirit died. (Just sayin’.)

Krampus is kind of like Child’s Play in the sense that the idea of a homicidal doll (or evil gingerbread cookies) chasing you around is laughable. Just throw it across the room, right? Kick it, step on it, lock it up. Well, as we’ve seen, that’s easier said than done. The concept may be goofy, but it’s nonetheless terrifying to think about it actually happening.

Emjay Anthony really stands out among these talented actors. As an audience, we’re mostly seeing the events through Max’s eyes. Anthony is sympathetic and relatable even as a kid. The actor also played a pivotal role in Dougherty’s previous film Trick ‘r Treat as the creepy pumpkin monster Sam. (By the way, we’re still waiting for that sequel.)

As always, Toni Collette kills it. She’s played many a mom, but no two are exactly the same. In Krampus, she’s a stressed-out perfectionist who needs her life to look a certain way. Adam Scott delivers the comedic performance we know he’s more than capable of but as a man trying to just get through the holidays. However, his role as a dad comes with a lot of heart and emotion.

Like many holiday movies, having Christmas spirit, believing in Santa, and/or being a generally hopeful person are the answers to everything. It’s sort of treated like the currency of life — be happy or bad things will happen. In this film, the damage can’t be undone.

Not unlike It’s a Wonderful Life or A Christmas Carol, Dougherty uses supernatural elements to teach his characters how to value what they have in life. Krampus may be a campy horror-comedy, but it is one of the most festive Christmas-related films I’ve ever seen. Despite the hellish events, it’s an oddly wholesome film with a lot of warmth.

Krampus is available to rent on Prime Video.

Your Favorite Christmas Artist is Getting her Own Special