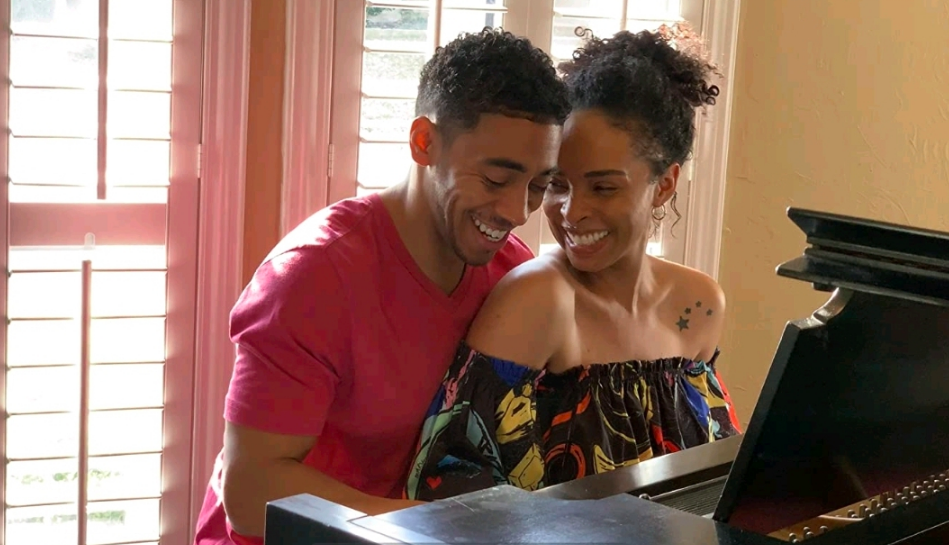 No Ordinary Love tells the story of two households affected by domestic abuse. Directed by Chyna Robinson, the film features heartbreakingly truthful portrayals of the ways unequal power dynamics can sever a home. It’s a tale as old as time and yet still timely as the film raises awareness of loopholes that are used to justify the behaviors of partners who choose violence — both physical and mental. It also shines a light on those who are content to “mind their own business” and end up complicit in the assault.

No Ordinary Love follows two couples: Tanya (DeAna Davis) and Derrick (Lynn Andrews III) and Elizabeth (April Hartman) and Michael (Eric Hanson). Tanya is a young mother to Faith (Nya Cummings), and Derrick is a police officer who blows off steam from the stress of his job by projecting his anger (verbally and physically) onto Tanya. Michael is the pastor of their local church. He’s trying hard to fill his father’s shoes but can’t even manage to live up to his little brother’s accomplishments. He relies on his wife Elizabeth — who also serves as a counselor for the church — to massage his manhood and make him feel potent.

Elizabeth and Tanya’s lives become interwoven when Elizabeth begins to counsel Tanya and gains insight into the severity of her relationship with Derrick. Although we learn Elizabeth is having a similar experience, she distances her relationship because there’s no physical abuse involved. She asks Tanya why she stays and tells her she needs to leave, but the sentiment feels empty to Tanya, who is desperate for the details of how to escape or if she even should.

Throughout the movie we see the women’s lives come closer and closer to intersecting as the inevitable consequences of domestic abuse come to the surface. It’s a beautifully helmed romantic thriller. BGN had the opportunity to sit down with Chyna Robinson over Zoom to talk about the film. Robinson’s short, Greenwood: 13 Hours, is a provocative first film that explores a broken family trying to survive during the Black Wall Street massacre in 1921. The short was released in 2017 and led to the production of No Ordinary Love. I asked Robinson for more details.

While watching No Ordinary Love — it’s odd to say, but it really is ahead of its time. I wondered why a domestic abuse thriller is ahead of its time, but people aren’t talking about how these relationships still exist the way they need to be. Can you give us a little bit of background on what inspired you to make this film?

Sure thing! I have always written and I started directing [for the stage] about a decade ago. Greenwood was my first film. It happened because I was touring through Tulsa with one of my stage productions. Someone approached me and asked if I would set a movie in Greenwood, and I said, “Well, what’s Greenwood?” Tulsa is only about a four-hour drive from me in Texas, and I hadn’t heard anything about it! I’m a research nut so as soon as I got home I went on Amazon and found all the books I could get my hands on. Then I decided that was going to be my first film.

I had a friend approach me who was actually the lady whose house I used for Greenwood. [At the time], I’d just found it on Zillow so she was a stranger. I said, “I see you have a house and it was built in 1916. I’d like to use it.” She said yes! We kept in touch, and later she approached me and asked how I would feel about doing a film on intimate partner violence. She said, “If I find the funding, can you do the script?” and I said, “Yep!” And that’s how No Ordinary Love came to be.

It seems sort of serendipitous.

Yes, all the things came together at once. It was like, “Yeah, I have to do this.”

What kind of research did you do?

I researched and spoke to survivors and got every statistic I could get my hands on. I sat in on a domestic violence homicide trial with the assistant DA; I sat in on offender sessions and several other things. I wanted to figure it out because I didn’t really understand what it was. Past physical violence, I didn’t understand. I was inspired to write the story I wrote after speaking with survivors.

Reading through the information about the film, I saw the question over and over again: “Why do they stay?” You mentioned not knowing much past the physical aspect, but the psychological aspect is an even greater component. While putting together the film, were you able to answer that question within yourself?

I was able to answer that question. As I said, I just felt like, “If someone hits you, leave.” I didn’t know about the coercive control that was a part of abuse, the emotional, the psychological, and the spiritual. The feedback that we’ve gotten has been that I answered it for other people as well. We wanted to make it entertaining so people would see and enjoy it, but I also wanted to spread awareness.

Tanya and Derrick’s situation is so overt, whereas the abuse in Elizabeth and Michael’s relationship is much more subtle. Michael is a little out of line, a bit over the top, but overall he seems fine. So when his behavior begins to escalate, Elizabeth starts to question herself, and then immediately rationalizes that she’s not the victim. What kind of research did you do to create that type of character?

I spoke with several counselors at our local women’s shelter. None of them were her — they were more self-aware — but I think we’ve all had experiences where you’re dealing with authority figures — counselors, teachers, etc. — and they think they’re doing the right thing. There can be denial, confusion, and even a hero complex. I wanted to put that in because I wanted to show that if you are working with victims of abuse, it’s not your call to decide what they do. They really have a similar story but it’s so different. It doesn’t matter where you live, who you are, mansion or trailer park, domestic violence is pervasive.

No Ordinary Love is a well-paced film fully grounded with a heartfelt narrative. It exposes the intricacies and ironies of domestic violence situations. While parts of it are hard to watch, it’s a way that you may challenge your preconceived notions. Overall it’s highly recommended viewing.

No Ordinary Love is currently streaming on VOD. Keep an eye out for this powerful and poignant film.