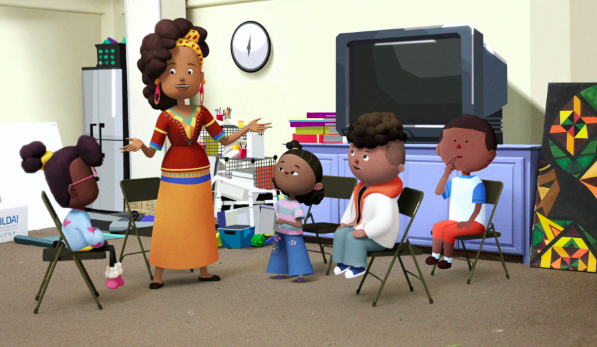 City of Ghosts brings the past of Los Angeles to a new generation of children. Elizabeth Ito’s animation stars Zelda and her four friends of different backgrounds exploring different cities to find and talk to ghosts.

The group of friends calls themselves the Ghost Team. Zelda starts out their adventures by talking to Chef Jo in Boyle Heights. Jo explains how she came about opening up her restaurant and what she expected out of it. At first, she didn’t think that there was a ghost until her friend Mariko convinced Jo to figure out what it was. Zelda reached out to her friend Thomas, who is a haunted artifacts specialist, on why ghosts would move something. Things came to a head when Jo’s fryer was thrown out. Mariko suggests that Jo meet with Zelda.

Zelda and her brother Jordan (behind camera) show us around their house. Zelda has met with ghosts for a long time. She loves meeting and searching for ghosts. Zelda often meets other kids who are just like her, and that is how they created their little club. The cute little Zelda inspects Jo’s restaurant then meets with the team at the Los Angeles Public Library. The four of them discuss the antics of the ghost as well as finding a Maneki-neko that Zelda should follow in order to find the ghost. When she finally sees the ghost, Zelda follows it around until the ghost answers her and tells her that her name is Janet. Zelda and Jo sit down to talk with Janet the ghost.

Janet explains that she is Japanese-American and used to live in the neighborhood. Her mom used to own the restaurant and had a specialty of food that made Janet happy. Janet’s specialty was cheese gyoza. Jo gets the idea of making a gyoza and naming it after Janet. Once they open the restaurant, Janet helps and meets with customers; she’s happy to be in the space that her mother once owned. Jo and Janet learn to live well with each other and run the restaurant. The team comes to the restaurant to celebrate solving the mystery and get served a Jo and Janet special.

Each episode continues in this cute way, exploring multiple cities with a different member of the Ghost Team. Next stop, we follow Thomas in Venice as they explore a phenomenon with Sam, who can see a ghost. This particular episode doesn’t just focus on one child who sees ghosts but also another kid who doesn’t connect with the kids at the skatepark or anyone else but a ghost skatepark. We meet two ghosts who practically live near or around the skate park. We get a history of Venice and the culture of skateboarding, solving the mystery of who they are and the reason of why they stick around. In Los Angeles, the Ghost Team gives us a glimpse of Leimert Park, Tovaanger, and the Tongva (Indigenous people of Los Angeles), the Bob Baker Marionette Theater, and Koreatown; places that are otherwise unknown to tourists. Each ghost gives a gem of history on what makes the neighborhood and the significance of how it came to be or the people that made an impact on that sector.

Going in, this show represented the youngest generation of children that do their own version of ghost hunting that brings light to Los Angeles. Zelda and her brother take the time to explain who the team is and how they are able to function around town. They are encouraged by their parents, as well as caring adults who want to find out what it is going on in their parks and buildings. You would think that you are getting just a bit of history, but they truly give insight that one would not casually learn. Any person born and raised in a city has a deep connection and roots as well as belonging that one would not be able to get casually when moving in. For example, Leimert Park has a rich background of art and music that didn’t start off that way. But once it celebrated the arts, it built up such a wonderful community of people that continue this way of life. However, their precious park is now fenced off from the rest of the neighborhood, unlike how it stood many years ago. The kids learn this history then later join in with the community by participating on poetry night with other kids and adults of the neighborhood that dealt with the ghost who made noise for them.

Although this is a certified kids show, I found myself enjoying the historical stories given by the ghosts thus giving a new generation of children (in my case adults) a background on Los Angeles. I absolutely wish that there were more episodes. The animation technique will draw you in, the cuteness of a bunch of 8-year-old kids speaking about cultural significance on how ghosts are able to communicate or act is what you will stick around for. Elizabeth Ito took the time to learn about each part of the city and the historical significance in a way that kids could follow well. Quite honestly, the city of Los Angeles in the eyes of a child and a ghost is a creative way to learn about it. I can’t wait for the next few seasons to arrive. I certainly hope that we explore other cities in this country.

City of Ghosts is currently streaming on Netflix.