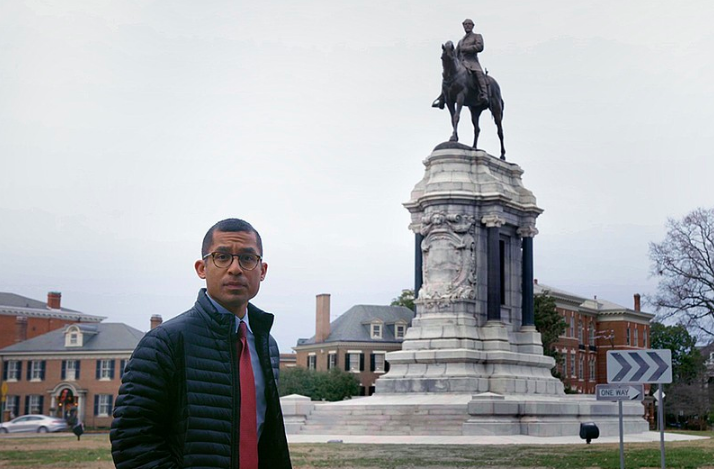 The Neutral Ground, a new documentary from comedian CJ Hunt, is a film that tells a story of two sides. While it’s arguable that both are alike in dignity, it can be said that both sides have had significant impact on the lives of Americans for decades. Growing up as the child of a Black father and a Filipino mother, Hunt has always been fascinated with race. His father, simply known as Mr. Hunt and can aptly be described as “feisty,”  tried to instill in Hunt a good measure of anger at the current state of race in the country, a final revelation the elder Hunt is glad to see his son accept. After his mother’s untimely passing, Hunt grew up primarily with his father, who was well-versed in critical race theory. Even having this as a backbone to his childhood and gaining an education in Africana studies, Hunt found he still had questions that hadn’t been answered.

While teaching students at Green Middle School in New Orleans, Hunt met the one who would become his producing partner, Darcy McKinnon. After teaching for a few years, he migrated to New York City, where he found success as a correspondent on The Run Down with Robin Thede and The Daily Show with Trevor Noah. It was during these multiple shifts that Hunt began to pay attention to an unusually controversial battle brewing in the Nola city courts: the request to remove major confederate statues from Louisiana ground.

“Breaking up is hard…” taglines the documentary, and comparing the release of Southern iconography with the conscious uncoupling of a relationship isn’t too far off. Despite the Lost Cause being mostly legend, some find it hard to let go. For some it’s easier to push any negative aspects just outside the periphery instead of actually having to confront them.

Hunt is a comedian by nature, and McKinnon, who understood documentary structure, would find ways to rein in Hunt’s more over-the-top suggestions. At one point Hunt wanted to pledge bike racks in front of each statue. While plaques are unable to be installed, bike racks can be dedicated and inscribed. Hunt suggested doing this and using the inscription: “Robert E. Lee Owned Slaves.” While the idea certainly had merit, McKinnon wisely suggested that they think about what they’re making, for whom and for what purpose. The film needed to be more than a series of skits; it needed to go deeper. The effect is a well-honed piece of art that is as humorous as it is heartbreaking.

It’s presumed that Hunt’s experience as a straight-faced satirical correspondent for The Daily Show helped prepare him for interviewing Southern sympathizers and attending a Civil War reenactment. His fascination with hearing both sides is what let him keep a straight face while being told the Civil War was not at all about slavery and the statues were not inherently racist despite the wording “McErnery and Penn having been elected governor and lieutenant-governor by the white people” and “the national election of November 1876 recognized white supremacy in the South and gave us our state” being prominently inscribed on the Battle of Liberty Place Monument, called by David Duke “a symbol of white pride” in 2004.

To say a significant part of the country’s population has their head in the sand when it comes to the negative impacts of the Confederacy is an understatement. These are people for whom delusion is their perception of choice and the battle against removing the monuments seeks to protect them as much as the paragons of days they hold so dear.

The Neutral Ground is strong when we see Hunt dissect Confederate arguments and stare stone-faced into the middle distance while subjects try desperately to convince him that they have a point. He’s effortlessly congenial, and there’s something to his “dark but not too dark” skin tone that seems to put these would-be Confederates at ease. But the documentary is strongest when we see Hunt’s guard drop. The relationship between Black pain and comedy can produce enough content for its own documentary, but the truth of the matter is that many African Americans live under the guise of “laugh or cry,” wherein mirth is used to mask irreconcilable pain. Hunt makes a visit to Whitney Plantation in New Orleans. Unlike other plantations that boast themselves as vacation and wedding destinations, the Whitney has included displays that allow for reflection of the country’s sordid past.

The Whitney commissioned sculptor Woodrow Nash to create more than 40 bronze cast likenesses of slave children that are peppered throughout the plantation grounds. There is also a monument to the 1811 Slave Uprising.  Bronze heads are brutally focused on pikes in rows near the ground. After the 1811 Slave Uprising, those caught were decapitated, their bodies thrown in the river, and their heads put on pikes along the shore as a message. The scene is unsettling and hurtful, but necessary. The pain is evident in Hunt’s face as we see grief change into anger and back again.

Shortly after, Hunt participates in a Dread Scott Slave Rebellion Reenactment. The activity reenacts the Slave Uprising of 1811 where participants battle for freedom before marching the trail to freedom. It’s empowering, and the pride and catharsis it brings Hunt is nearly palpable. It’s a strength that’s needed as Hunt dictates the many blockages to the years-long process of removing the statues. It’s a fight that takes him from New Orleans all the way to a fateful night in Charlottesville, Virginia, where one of the largest white supremacists rallies was being held at their Robert E. Lee statue.

The fear is evident in Hunt and his escort, but even more so the weariness. The goal of the film is not to provide answers, but instead to provide evidence to help the viewer decide for themselves. However, the tragedy in Charlottesville, which took the life of an American in broad daylight the day after Hunt was there, draws a clear line in the sand.

At a concise 90 minutes, The Neutral Ground provides a wealth of information that gladly welcomes second helpings. The pace is inviting and Hunt himself is engaging and intelligent. His kindness with his subjects, even those with deeply opposing views, creates a welcoming atmosphere that allows for questioning and introspection. The Neutral Ground is a powerful and beautiful film and deserves your unbiased attention.

The Neutral Ground is streaming now on PBS POV On Demand