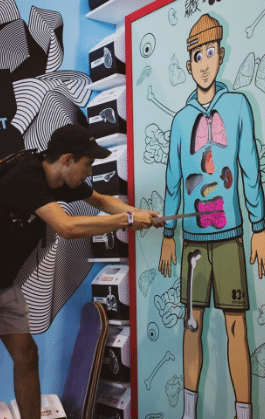 Complex is a digital media platform founded by Marc Ecko, who also founded fashion label, Ecko Unlimited. The Complex company focuses on current style trends, hip hop culture and visual art, which is reflected in the conventions elaborate set up.

Hundreds rushed in to buy exclusive and limited merchandise from some of the most popular streetwear designers in the nation, at 9am, when the doors of Chicago’s McCormick Place opened. 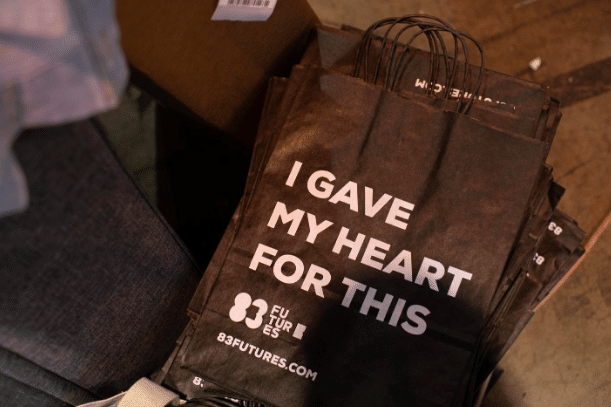 “ComplexCon is so much about getting stuff, but our message is different. Don’t just get stuff; give,” Jonathan Richman, Creative Director of 83 Futures said. “20 people die every day waiting (on an organ donation), so if we sign up some people, we can cut that number down.”

ComplexCon, which is normally hosted in Long Beach, California made its Chicago debut this year. 83 Futures also made its debut at the convention.

Artist collaborations are a huge focus at the convention. Brands such as Converse, collaborated with streetwear brand Chinatown Market, and designed a “UV Chuck,” a classic Converse shoe, whose coloring intensifies when exposed to UV light.

“Organ donation is the ultimate collab. If you donated a heart to somebody else, that’s a collaboration, you kept them alive,” Richman said.

83 Futures collaborated with Richmond artist, Earl Mack, to design a life-size game of Operation that is displayed in their booth, the face is a little more melanated than the original, and a t-shirt. The shirt states, when I die, you can take my organs. Just don’t take my shoes.

“We wanted to do an updated version of this classic game,” Richman said.

“In a lot of urban areas, the need for organs is very high but the amount of people who are registered to be organ donors is very low,” Richman said. “One organ donor can save eight lives with organs and heal 75 more with tissue, so that’s 83 Futures, that’s what we stand for.”

New England Donor Services spoke about some of the myths and facts of organ donation with attendees, including recording artist, BJ The Chicago Kid, who visited the booth and agreed to use his platform to talk about the issue.

According to Richman, BJ The Chicago Kid was initially uncertain of his involvement with the brand.

83 Futures also collaborates with Diamond Supply Co., Naturel and Staple, who supply promotional products for the brand. “It’s almost an untapped group of artists who are hungry to do something meaningful with their art (for 83 Futures),” Richman said. “We had a phone call with Jeff Staple (of Staple) a year ago and he was into it immediately.”

After 18 months of building the brand, Richman and his colleagues received guest wristbands to attend ComplexCon in Long Beach last November. “We walked around and 10 mins in said ‘we have to be at one of these.’ Complex gave us a booth because they believe in what we’re doing.”

ComplexCon gave 83 Futures their debut booth at ComplexCon Chicago just months after their initial exposure to the California convention.

For the first time this year, ComplexCon hosted a community week leading up to the convention, which included a sneaker donation drive, soup kitchen takeover and night against violence.

Streetwear.edu hosted 83 Futures and Chicago native and PHLI Worldwide Creator, Dave Jeff, who spoke with 75 kids between the ages 16-21 about streetwear, the fashion world, and education.