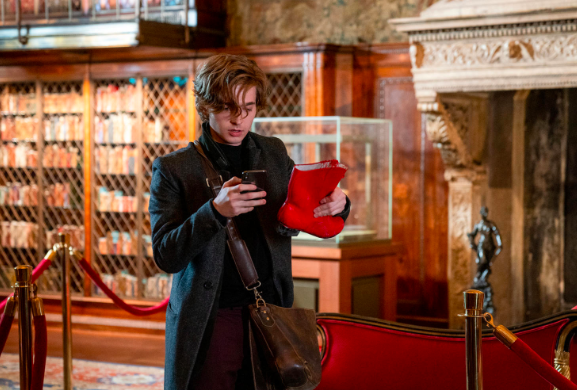 Christmas morning, Lily wakes up and rushes to the Christmas tree excited, but her family isn’t there and neither is the notebook. Langston wishes her a merry Christmas and asks her about the party, which she walks away from. She sees her red boot and rushes to Lillian’s in hopes that she has the notebook. Lillian hasn’t seen Dash since he brought the boot, and she notices that Lily is wearing the pair. She is hoping that Lily is prepared to deal with the real version of notebook guy and not who she thinks he is.

The caroling group invites Lily to McSorley’s. Lily asks what Lillian will do when the notebook comes, which Lillian responds with, “I’ll dash it right over, no pun intended.” Lily questions the pun, but Lillian covers it up. As she walks to McSorley’s, Lily thinks over the pun, figures out Dash’s name, then remembers that she met Dash the night before. As well as Sophia. Girl.

Lily video calls Boomer, explains how she got his number, then questions him about where his friend was the night before and spills that Dash left with Sophia. Boomer tried to avoid telling her at first but then tells her she isn’t wrong. Lily, upset, blurts the dilemma to her caroling group, and they reply by giving her drinks to try. Only one is opposed to underage drinking. Drunk Lily is urged to text Edgar about how she feels, which she does. Edgar shows up but to drunk Lily he seems like Dash at first. Edgar pulls out some mistletoe after explaining why he didn’t kiss her, then he kisses her. While they are lip locking, Dash enters with the notebook in hand and sees Lily and Edgar. He looks hurt as he calls her name. She is surprised to see him. Girl, me too.

Rewind to the night before when Dash is making out with Sophia at the museum. He stops kissing her, stating that it doesn’t feel right because he is thinking of Lily. Sophia and Dash talk about how neither of them wants to start up again and conclude that they are done. Sophia suggests that they sleep at the museum as friends. Dash wakes up to rush the notebook to Lillian’s, while Sophia gets ready to rush home. Her last advice to him is to give Lily more than a notebook.

Dash receives a notification from the mommy app with information about a lost red boot that was seen at McSorley’s. HE IS CARRYING THE OTHER BOOT. This is tew much. He runs to McSorley’s but stops to buy two tickets to see Collation that night. As he gets the tickets, he rambles about the coincidence and the magic of Christmas, hugs Santa, claims he believes, but is crushed when he arrives to see Lily.

He’s heartbroken that Lily is with Edgar. Lily points out that Dash was probably kissing Sophia then states she doesn’t feel well. Edgar states he will take her home, but she can’t go home wasted. She looks for her coat. Dash insists that he will take her. When she leaves, Edgar hits on another girl.

Dash has the audacity to question Lily’s choice in men when she responds that Edgar is easy to be with and calls out Dash for lying, points out that he is wearing the same clothes from the night before. Dash informs Lily that he and Sophia broke up a year ago, and they just affirmed their lack of relationship. Lily questions him on why he didn’t inform her in the notebook as well as that Edgar isn’t with her nor did the kiss mean anything. Dash accuses her of just kissing random guys, but Lily points out that it was her first kiss that she wanted with him, but he wasn’t there nor did he bring the notebook when he said he would. He states that she could have waited, but she says she has been going through a lot and they both have been keeping secrets. Lily also informs Dash that the whole notebook idea was her brother’s and wishes that she had never done it. This argument is filled with all the wrong things to say.

Lily lets out the secret that Boomer knew about her. Bruh. She informs Dash that Boomer said he would be nicer. Dash pulls out a pen and writes in the notebook. As he drops Lily off at Lillian’s, he leaves the other boot as Lillian tries to salvage the relationship. Dash isn’t interested in continuing with the game. Lily tries to hide that she was drinking, when her grandpa arrives. He gets upset with his sister for letting Lily get drunk. When they arrive home, Lily is surprised that her parents, brother, and extended family members are around the Christmas tree. She vomits into her boot. Nasty.

An upset Dash goes to Boomer’s to drop off his present. Dash unleashes his anger on Boomer for not telling him everything. Boomer reminds Dash that he did it for Dash and always has his back. He invites Dash to join his family, but he rejects Boomer’s offer. Mean Dash has returned. Lily’s parents check up on an upset Lily. They tell her that Langston came up with the idea for them to come back; her dad got the job offer and they would need to move by next week. Lily lets out a scream and exclaims that this is all too soon, but this job is a great opportunity. Lily’s mom suggests that Lily join the family for their last gathering as well as points out that they will talk the next day about her hangover.

Lily finally notices the notebook and reads Dash’s last surly words about how they set themselves up and says goodbye. Dash struggles alone at home but then decides to go to watch Coalition. The last few words of narration show the two are not happy in either of their Christmas festivities.

This episode has me stressed for the both of them. I saw the heartache coming, but I just couldn’t stop hoping they would work it out. With one episode left, I hope for a bit of relief. Boomer also deserves better than what Dash dishes out. He is more than just a supportive friend, but Dash can’t see that so neither will we.