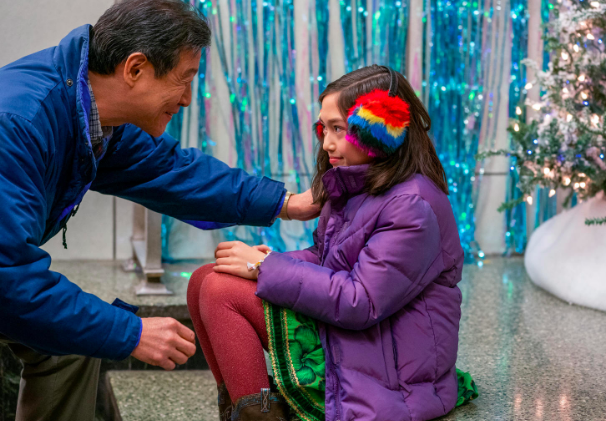 Lily and Dash’s voiceovers explain that Lily wants to get to know Dash by having him show her something in the city that feels like him. He directs her to the Grand Central terminal before the first train. The fact she got up so early for this is cute. He asks her to tell him what she sees. Dash likes the stillness of the place before people come to ruin it. Lily suggests that he goes to Central Park to meet Lily’s cousin who is a Zen master, standing like a statue for ten minutes. Lily wants to know Dash’s name but he states that she needs to work to get that name. The two continue to drop the notebook in spots around the city, beginning with their favorite snacks, salted pretzels, and Christmas cannoli. This allows Dash to open up about his worst Christmas experience and asks her to reveal hers.

Dash found out that his parents were getting a divorce right before Christmas, while Lily made bracelets for her classmates in middle school, but found that they threw them on the ground and the boy she liked, Edgar Thibaud, called her weird. Lily instructs Dash that his next dare is to leave the notebook with the patron saint of weird girls in Central Park. However, Dash doesn’t and rips out the page that he wrote on how he would go back in time to fight the kids that hurt her (aww) but rips that out, too. Dash and Boomer discuss the cuteness when Dov (Nick Blaemire) and Yohnny (Trevor Braun) come into the shop and announce a secret, underground show of the Challah Back Boys. They have our full attention. They are performing on the seventh night of Hanukkah and Dash thinks that this would be fun for Lily to attend. You know, to see that weird is cool.

Lily is not excited about seeing a Jewish punk show. She wants Langston to help her get out of it, but he thinks she should go despite the excuses she gives him. Lily admits that she is developing feelings for Dash and doesn’t want to do something stupid. We have all been there, girl. Benny comes in to suggest that he and Langston camp out on the roof again, but Lily invites them both to the show so she won’t go alone. Good idea considering she has never been clubbing. Benny is excited to help her be a teenager ready for the club scene. He starts with the clothes: something that she has always wanted to wear but has been too scared to. Lily pulls out a sequined blue dress that she has been fixing up. I can’t wait to see it. The idea of clubbing gives Lily a nightmare of being rejected for being weird. Despite this, she gets up and heads to the spot, dressed beautifully, I might add.

At the location, a drag queen is manning the entrance with one requirement: inform her what is bringing Lily down. Lily’s first answer does nothing but her admitting that she is 17 and has never been kissed gets her in. The literal underground club has Lily making quite a few nervous mistakes that lead her to getting beer in her face and locking herself in the bathroom. Luckily, as she is wiping the beer off her face, Lily notices a message on the mirror, “Get back out there Lily ☺.” Yes, smiley face included. She leaves a message of her own before she gets back out to the club. Dov gives a speech on what the spirit of Hanukkah is about before they jam out. The drag queen pulls Lily out to the dance floor to get her to show her moves and get her kissed. Lily doesn’t know how to dance, but her weird moves definitely gets her noticed by everyone on the floor who join in. While she is dancing, Lily gets crowned. Good for her! Dov and Yohnny notice her, too. It would seem that they are instructed to find her. Sweet.

A guy comes up to Lily, whom she mistakes as notebook boy only to find out it is Edgar (Glenn McCuen) from when she was younger. Poor girl gets flashbacks as Edgar laughs and calls her weird again for bringing out her notebook. She runs out the club, losing a boot as she falls down, and climbs into a cab…forgetting to leave the notebook as Edgar chases behind her. In her voiceover, Lily states that it is probably best that notebook boy doesn’t find out who she is because she is a loser. When she arrives home, Lily finds the front door open. She pulls out her phone as she walks in to find Benny urging her to be quiet and to go away, Langston is talking to someone insisting he doesn’t know where Lily is. It’s Grandpa! He grounds Lily forever.

They really had me at that last scene. Why is Grandpa home early from Florida? I should have seen that the Edgar flashback would come back again. While Lily may think that she is not brave, I think that she doesn’t see how brave she truly is by just being herself and not conforming to the teenage norms of society. Also, that Cinderella moment of her losing a red boot. Now, will Dash be able to find his Cinderella?