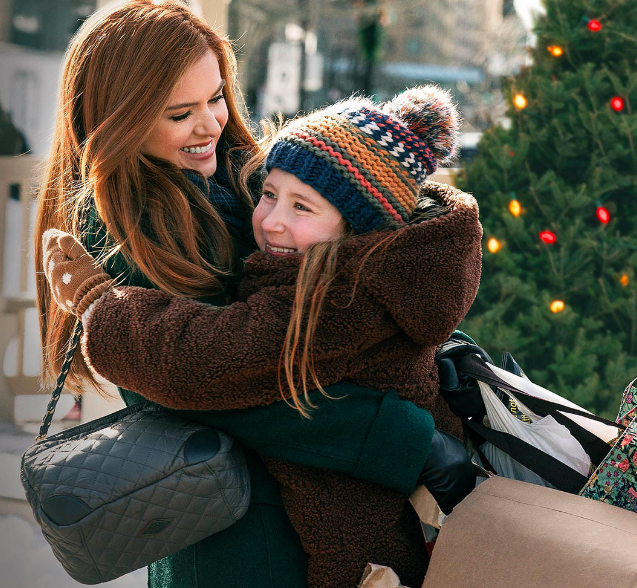 Around this time of the year, we are bombarded with hordes of holiday films. Everyone wants to make a film about Christmas or set around Christmas for fans of the holiday to consume. While a majority of them are cliché and riddled with views of a normal society, it is refreshing when we get one that triumphantly speaks to our emotions.

I love Elf during the holidays, and This Christmas is a go-to every year. Of course, some Disney Christmas films are on rotation all the time, like The Nightmare Before Christmas, The Santa Clause trilogy, and do not forget I’ll Be Home for Christmas with my childhood crush Jonathan Taylor Thomas. This year, Walt Disney Studios is hitting us with a feel-good film set at Christmas time that both kids and adults are going to love, titled Godmothered.

Directed by Sharon Maguire (Bridget Jones’s Diary), Godmothered is a family comedy about a young and unskilled fairy-godmother-in-training named Eleanor. Upon hearing that her chosen profession is facing extinction, she decides to show the world that people still need fairy godmothers. Determined and ready to prove herself, Eleanor finds a lost letter from a 10-year-old girl searching for her happy ending. Leaving the Motherland and traveling to Boston, Eleanor tracks her down and discovers that the little girl, Mackenzie, is now a 40-year-old single mom working at a news station. Having lost her husband several years earlier, Mackenzie has all but given up on the idea of “happily ever after,” but Eleanor is determined to give Mackenzie what she needs, whether she likes it or not. Godmothered is written by Kari Granlund (Lady and the Tramp 2019) and Melissa Stack (The Other Woman).

The cast is pretty spectacular and hosts multiple generations, giving us variations of what happily ever after means. Godmothered stars Jillian Bell (Brittany Runs a Marathon) as Eleanor, Isla Fisher (Confessions of a Shopaholic) as Mackenzie, and Disney Channel star Jillian Shea Spaeder and newcomer Willa Skye as daughters Jane and Mia. The film also features Jane Curtin (Coneheads), June Squibb (Nebraska), Mary Elizabeth Ellis (It’s Always Sunny in Philadelphia), Artemis Pebdani (Scandal), Santiago Cabrera (Big Little Lies), and Utkarsh Ambudkar (Pitch Perfect). Women lead the charge in front and behind the camera. With a film full of actors known for their comedy chops, the film has a great combination of heart, comedy, and lessons learned. It was great to see Isla Fisher in a role that was more grounded yet carried just as much heart and spontaneity as her former roles.

The writing for Godmothered is fun. While it subtly reminds me of Enchanted, it has a flair all its own. Godmothered has the storyline of a magical person in the real world and a red-haired beauty, but the story is much more realistic. Both films are a play on the fractured fairy tale, but Godmothered thrives at its attempt to add twists and character changes to make it more modern. We saw the start of something new with Frozen and Disney’s aim to tell a story about a different type of true love. Godmothered has several plot twists that highlight the modernizing of age-old fairy tales. It’s truly out with the old and in with the new by the end. There was even a glimpse of a boy or non-binary child training to be a fairy godmother before the credits rolled.

There is no doubt we are in a new era of fairy tales. It will be interesting to see how this manner of storytelling continues with not only Disney but other films as well. Granlund and Stack are a great pairing for writing. Granlund has the Disney experience while Stack has a good eye for female relationships in the real world. It was a fun moment to see a fairy godmother in a poofy-pink dress playing pool and drinking lemon drops and light beer in a bar. The writing combined with Maguire’s experience doing a female-driven, dramatic, romantic comedy make for a strong film that delights and inspired.

ALSO READ
Sundance 2022 Review: 'After Yang' Is Too Caught Up in Its Metaphorical Messaging

One thing that will truly stand out in Godmothered is the music. The soundtrack of this film gave me all the feels. It gives off holiday sweetness that brought a tear to my eye, from “My Favorite Things,” dance tunes that confirmed that Disney is moving its way to the current age of music, and a heartfelt performance of “Rise Up” by Jillian Shea Spaeder that was beautiful to watch on screen. You know it is a good soundtrack when you leave the film singing “Fantasy” by Earth, Wind & Fire. Bravo to the whole music department for this one. It was the magical blend of songs we all love put into a Disney story that transformed the viewing experience. It had a little bit more swag, magic, and emotion. We weren’t pushed over the edge with the essential Christmas tunes, which was nice.

Godmothered is a fun Christmas time film. Parents will love the new message of forgetting happily ever after and placing the focus on being happy. Kids are going to love the slapstick comedy that always brings big laughs. Everyone will love the holiday joy and the look of a new type of family on screen.

Godmothered will premiere on Disney+ December 4, 2020.