An Afternoon with Michael Dorn

Dragon Con celebrated the 30th Anniversary of Star Trek: The Next Generation by inviting several members of the iconic cast. One cast member, Michael Dorn, sat down with a few outlets, including BGN, and answered some questions. Here’s what he had to say:

**Michael Dorn enters the room and immediately starts pretending to be a draft pick for the Denver Broncos at the announcement press conference. After a good laugh we all settle down and get to business.**

Q: You directed one of my favorite DS9 episodes ever, “Inquisition”. I wanted to know if you had any interest in continuing to direct? Would you be open to directing something like The Orville or even a future Star Trek episode?

Michael Dorn: Interestingly enough, that’s why I got into the business, but I got waylaid by acting and I love acting. I finally got the opportunity on Deep Space 9. When I left Deep Space, I directed a couple other shows, and they contracted me to do more but then both shows got canceled. Then I was contracted to do one, pay-to-play episode of Enterprise. That didn’t work out. It was a whole comedy of errors. I love directing and would love to do it. It’s a really difficult thing. Jonathan and LeVar have been really fortunate. They’re wonderful directors so they’re able to move in and out of that world pretty easily. 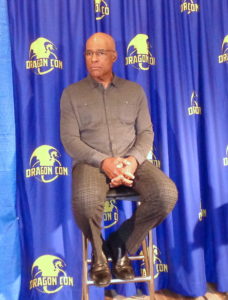 Q: What does it look like from the inside to have this space in pop culture and nerd history?

Michael Dorn: I’ve always been a fairly simple man. My focus was always on the work. I never looked at it as anything but a good job, a product of my middle-class upbringing. I mean I knew Star Trek was a huge thing because I was a fan of the original show. But I didn’t know how big it was going to be [for me] until way after it was over. If somebody had said, “Ok Michael that’s it, you’re done,” after 11 years and 5 movies I’d still look at it as a very good run. I’m honored, and plus the conventions are just out of control still. Seriously, 2 or 3000 people in a room listening to us prattle on, you just don’t get that anywhere. We always say it’s the gift that keeps on giving.

Q: Was the headpiece a singular unit and when you put it on did it transform you as an actor?

Michael Dorn: Not as an actor, but as Michael Dorn grumpy and surly, yes. It was a 5-step process. It wasn’t heavy or any of that but it was uncomfortable. They put it on with Spirit Gum or airplane glue basically. At that point, makeup hadn’t progressed since the 30s. They were still using the same makeup they used for the original Frankenstein. Mike Westmore had to change the way they did things because I told them, “I can’t do this. I love the scripts, the actors, everything, but I have to have a career after this,” And I wasn’t going to because I would be seriously scarred. – Maybe I should have just done it and sued the shit out of them.

**Big laughs from all of us in the room**

Q: Dragon Con is having a screening of a movie, Unbelievable, with about 40 other Star Trek alum. How did you get involved with it?

Michael Dorn: That was a fairly bizarre process because it took a very long time to get it to this point. I was contacted by these producers and the director. I had lunch with them and it’s a fairly motley group. The script has changed dramatically over the years, but I honor my commitments and so when they said they were ready to shoot my scene, I showed up in Malibu, shot the scene, and that was that.

BGN: The end of Deep Space 9 was the end of the Star Trek canon. Everything since then has been a prequel or sidequel. You inhabited Worf for 11 years, as you said. Do you ever think about what that character would have done after that story?

Michael Dorn: It’s interesting, I wrote a script. I had this idea to do a Worf spinoff. We liked the Klingons but we had only scratched the surface, except on Deep Space 9 they got further and further into Klingon culture. But they never really dealt with it completely. The fans loved all the mythology. It was very Shakespearean.

So the story is that he goes back to the Klingon Empire and he is fighting to keep it together because it’s doing what it has always done, destroying itself from the inside. Coups, assassinations, grabs for power – that sort of thing.

And in the script, there are aliens, humans, and others who live in the Klingon Empire. I wasn’t thinking about it then but it’s echoing what’s going on now. These Klingons are pointing at these aliens and saying, “It’s them! They’re the problem that is causing this!” It’s not true but that was the intrigue. It had legs for a bit. I got a couple of meetings and people were very interested, but it just kind of fell by the wayside.

[Worf] would be on a ship, adventuring. He’d be trying to keep the Empire together but he loves exploring, he loves being out there on the front lines. There would be two major battles and two hand-to-hand fights per episode.

It was incredibly rewarding talking to a legend, someone who brought one of my all-time favorite characters to life. What makes it more satisfying is that he is truly a humble gentleman with a great sense of humor. And he has as much love and respect for the character of Worf as the fans. I think it’s safe to say, Michael Dorn has justified and solidified my fandom, for life. 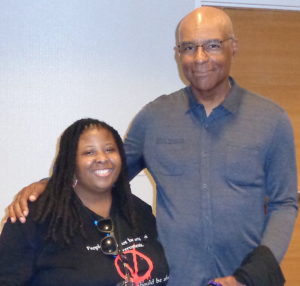