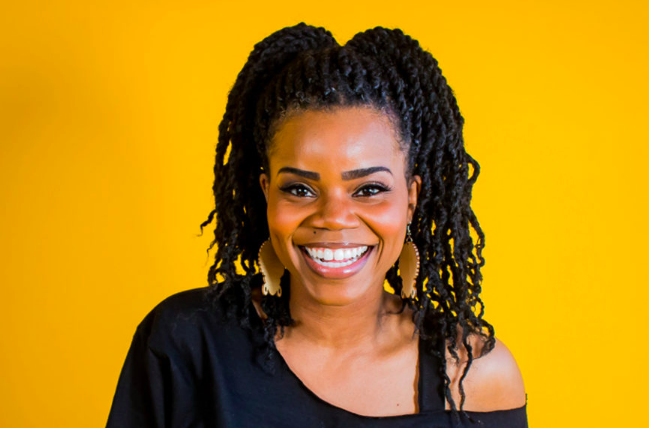 BGN got the chance to speak with Kelly Jenrette, and here’s what she had to share with us during a phone interview.

You star in the Spectrum original series Manhunt: Deadly Games, which aired in February of this year. What was it like being in your character’s shoes?

It was amazing, and it was close to my heart. The series starts off with the bombing that took place in the 1996 Olympics in Atlanta, and that’s where I’m from. And I even have a picture with my mom and my youngest brother, who was in the opening and closing ceremonies of the Olympics, and then my mom is holding the Olympic torch. So, being a part of that brought back memories.

While I didn’t remember everything that happened, it was eye-opening to do the research and to see how they destroyed Richard Jewell’s life and when Eric Robert Rudolph went on to do so. To be able to step into the shoes of this agent (who’s not necessarily a real person, she’s more of a combination of agents who worked on the case) was challenging, but I enjoyed it.

You also have two Netflix movies All Day and a Night and Uncorked currently streaming. What was it like working alongside actors like Jeffery Wright and Niecy Nash on those movies?

Jeffery Wright is by far one of my favorite actors of all time, and to be able to work alongside him in All Day and a Night was very humbling. I had to remind myself, when we were in the middle of scenes, “Hey Kelly, stop staring. You are in this movie,” but I just took every opportunity that I had to watch him and learn from him. There was a scene that I was in and he didn’t have any words, in the beginning. He just grabbed the baby and walked from one side of the bed to the other. That moment was a masterclass in transparency and vulnerability and stillness and angst and hope and desperation. It was a beautiful moment.

Then, of course, working with Niecy Nash, who is not only a comedic genius, but she has dramatic chops, as well, it felt like being around family working with her and Courtney B. Vance, who is very funny. I don’t know that people have really gotten to see that side of him, but in between takes it was challenging to keep a straight face. He’s very silly. Working on both of those projects was definitely a highlight of my career.

Out of every character you’ve played, which one is your favorite?

That’s a great question! It is safe to say, I have enjoyed every single character that I have played in my career, but if I had to choose one, I really enjoyed playing Agent Stacy Knox in Manhunt: Deadly Games. I think because it was just so different from what I’ve done before. I really enjoyed playing her. CBS acquired it back in September, so more people were able to watch it, which I was grateful for more because not everybody has Spectrum.

Then, I have to say Delanda in All Day and a Night because she was very different than any character I have ever played, as well as just being on the completely opposite end of the spectrum from who I am as a person. The challenge of recognizing that I was judging this character was eye-opening for me. It put me in my place to say, “You have no right to judge this woman. Understand where she’s coming from, and tell the truth and that she is moving.”

I hear that you’re currently writing a play that imagines a real life meeting between Betty Shabazz and Coretta King. What inspired you to write this amazing play?

I was working on The Meeting, written by Jeff Stetson. My best friend Shannon was producing it, and her husband  [Bechir Sylvain] was playing Malcolm X, talented actor, and then [Ethan Henry] was playing Martin Luther King. I got the chance to work alongside Shannon, as she produced this. I was so moved by this piece. Jeff Stetson, the writer of The Meeting, was at the premiere. I walked up to him, and said, “This was amazing. I would love to see a meeting between Betty and Coretta.” And he kind of laughed or shrugged and went on his way. Someone overheard me say that, and they said, “Well, you should write it.” And I kind of did the same thing to them that Jeff did to me, just kind of shrugged and moved on.

Then there was a theater collective that was formed, Black Rebirth Collective, that I’m a founding member of. One of the questions they asked was, “What is something you’re passionate about? What kind of stories do you want to tell?” I just couldn’t get the idea of seeing a conversation like this between Betty and Coretta out of my mind. I told them and they were like, “Great, get to writing.” They commissioned me to write it.

What really drew me to wanting to tell this story was majority of the times when we think about Dr. Betty Shabazz or Coretta Scott King, we think of them as the wives of these amazing men or the widows of these amazing men. And we don’t get to see them outside of the realm of who their husbands were in this country. I just wanted to be able to imagine a conversation, what that would look like.

In Betty’s biography, Myrlie Evers-Williams, whose husband was assassinated before both Martin and Malcolm, wrote the foreword. She talked about how they were the widows of the movement, and she talks about how their relationship went from rivalry to tolerance to genuine affection. That just really stuck with me. I thought, I would love to imagine what that journey was like. That’s how it was born.

What’s the number one thing you’re looking forward to the most after quarantine has ended and everything’s back to normal?

Great question. I mean, so many things. As someone originally from Atlanta, I usually go home at least two to three, sometimes four times a year. I’ve only been able to go home once this year because of everything that’s been going on. So I would love the freedom to be able to go home and get a hug from my mom, whenever I want to, just on a personal level. I think career-wise, just hoping that things begin to get back to normal where we are able to go into casting offices and audition as opposed to doing everything online or being able to just enjoy being around other people.

I’ve worked on two sets since COVID has happened, and it’s just so very different. The warmth is still there. People are excited to be working, but you can just feel there’s a sense of, “You have to be careful. You have to stay six feet apart.” So, just being able to kind of take a breath and just get back to enjoying life. Will that ever happen again? I don’t know, but that’s the hope.

Emmy-nominated star Kelly Jenrette stars in Manhunt: Deadly Games airing Mondays at 10pm on CBS. She’s the one to watch as she continues to nail every role that she takes on and continues to make her mark in Hollywood.