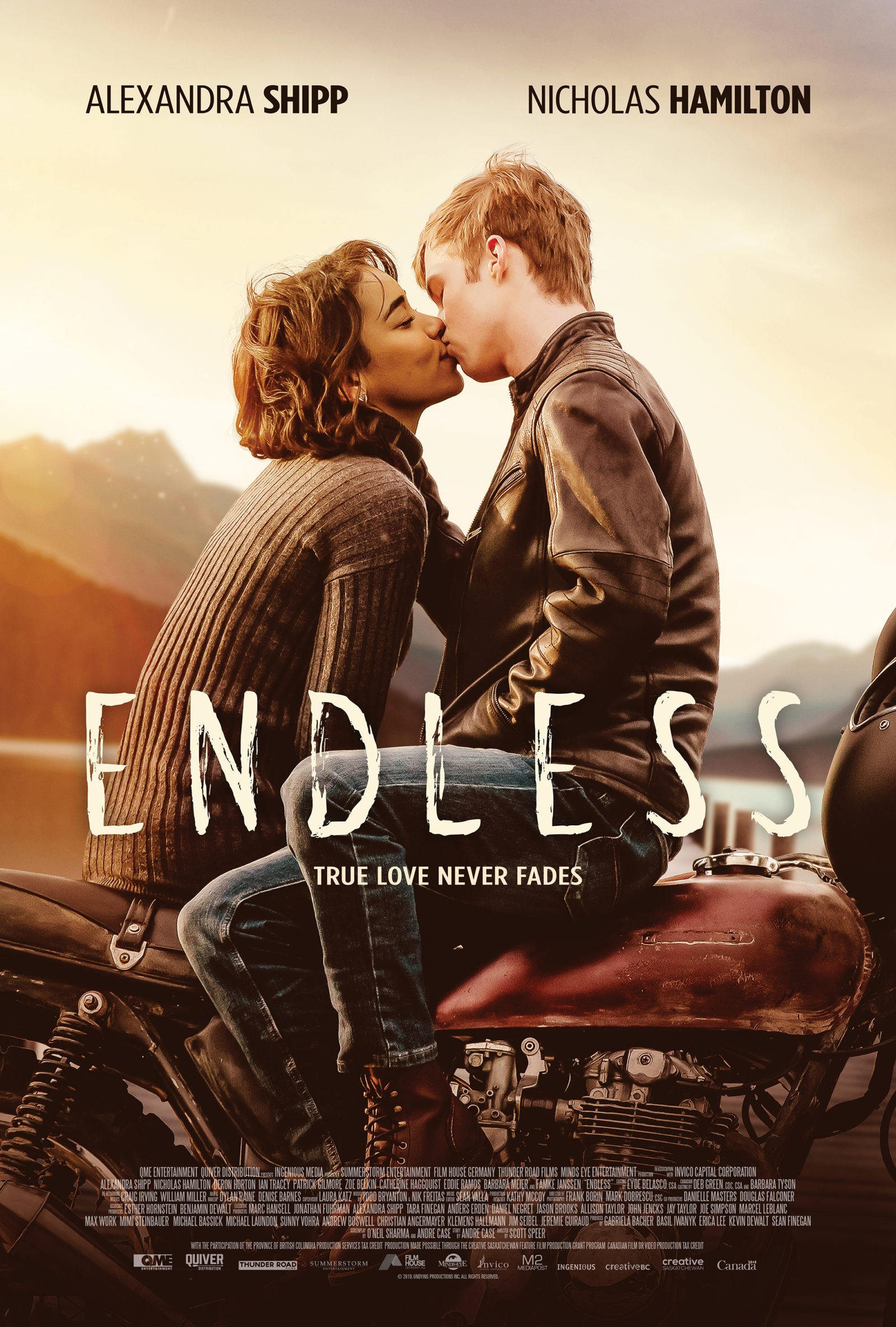 Endless is a teen drama fantasy film with a heartwarming theme and is the latest film directed by Scott Speer. Two teens find themselves madly in love with one another. Their love does not make sense on paper, but to each other, it could not be any better. These two teens attempt to defy all odds and try to stay together even after death. The film illuminates the relationship between two teenagers from opposite upbringings to illustrate that love can transcend even beyond the physical, to something more spiritual.

It is clear that there is little that the director can do to suspend the audience’s belief early on in the film, mostly due to the thinness of the material, yet, despite this, the story continues develop in ways that compliment the main protagonists. Riley (Alexandra Shipp) and Chris (Nicholas Hamilton) are two teenagers from completely different backgrounds. Star-crossed lovers whose relationship was never meant to last, one is destined for greatness and the other, not so much. One is an affluent student who graduates among the top of the class, a prodigy child with two professional parents. She has applied at the family alma mater, a legacy school and had an internship with the district attorney and is artistic. The other just barely made it out of high school. He has a single parent who is struggling to keep their lives together and trying to make it work, and a father that has left them, all this while in a low social economic status. These two teens seemed to have defied all odds.

The film also does a great job at presenting a world in which two lovers can still be together, at least for a while. Riley and Chris feel opposite of one another. Riley is a born winner, while Chris is presented as a loser. Riley’s mom (Famke Janssen) and her father (Ian Tracey) are two headstrong parents who want what they believe is the best for Riley. Both parents are in agreement about Riley’s future, and Riley submits to their requests with little autonomy to choose for herself. Both parents help to enlighten the audience about why Riley is so hellbent on becoming a lawyer.

There are few scenes that really showcase the range of these actors. Riley, an imaginative spirit, uses her mind to develop creative graphic novels and to focus on becoming a lawyer, just like her parents want her to be. Meanwhile, Chris is presented as a laborer who spends his time fixing up a motorcycle with little to no information about his father. Chris’s character proves to be a foil for Riley, allowing her to see and experience life from a different perspective. It is through Riley’s experiences with Chris that she is finally able to understand that she can go off to do great things and that her life is worth more than she first thought.

A shocking reveal in the film happens exceedingly early in the teen drama. If there is a fault to find in the film it is this — too early on is there a loss so great that it should be as impactful for the viewer as it appears for the main character. Yet, the audience does not have enough suitable time to be invested in the emotional connection between the two leads. There is a little less than fifteen minutes of the film before one of the principal characters is killed. The relationship that ends falls short of what could have been a very heartbreaking scene. This is a strategic and risky move. The film pushes Riley’s importance even further in this teen drama.

The other aspect of the film that fails to make an impression is that it has characters the same way a house has fixtures. The film does little to develop its supporting roles. With the arrival of Jordan (DeRon Horton, Dear White People), the afterlife should be more understandable. Yet, there are times that Jordan feels more like a negative stereotype than a fully developed character. Nate (Eddie Ramos) and Julia (Zoë Belkin) have defining characteristics, but they do not have a sense of identity. Outside of Nate developing a drinking problem for the loss of his friend and Julia being an overly supportive friend, there is little that is actually known about these characters. They appear to simply exist in the film without actually moving the narrative forward.

The movie Endless does a valiant effort at subverting audience’s expectations. While most would have a preconceived notion of a wealthy kid getting into a prestigious school in part due to their family legacy, the film manages to flip the script and provide an alternative perspective. By doing so, the film gains an extra layer of intrigue. This movie does not break ground, but it does create a delightful viewing experience.

Outside of the few negatives about the film, there are good components to it. Endless attempts to tell an inspirational story that love does not end just because your love is no longer with you. Instead, it shows how the end of someone’s life doesn’t mean it is the end of your own. A truly powerful message simmers just below the surface of this entertaining film. Endless is an collection of inspirational ideals and heartwarming moments between understanding who you are and wanting more for yourself and your life.