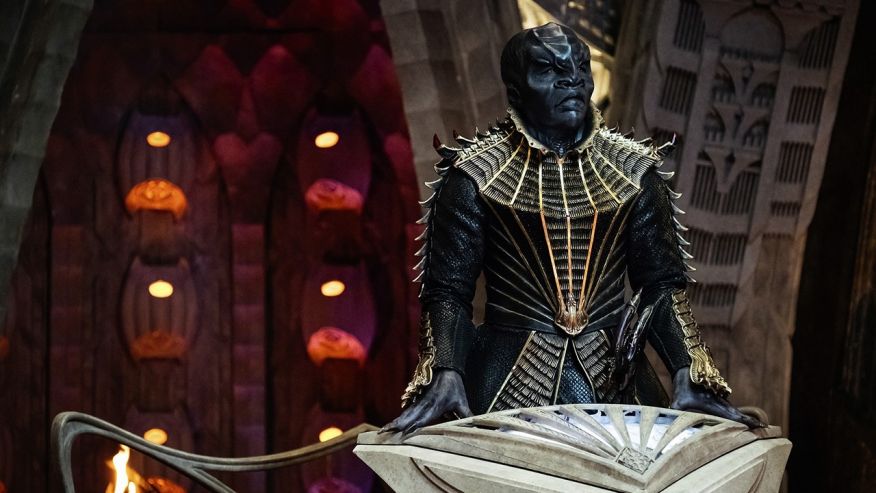 As a huge Star Trek enthusiast, I’ve been eagerly waiting for the premiere of Star Trek: Discovery. Anything pertaining to the 15-part series is on my radar. From Trek forums to the latest Trek gossip, I’ve been doing everything to satiate myself until the series airs on CBS’s streaming service Sunday, September 24, 2017.

That’s why when I heard that Rod Roddenberry (Executive Producer) would be hosting a Star Trek: Discovery Q&A at HawaiiCon 2017, I needed to know his take on the new series. As the son of Gene Roddenberry, the founding father of the Star Trek, and executive producer of the new series, who better to give a critique of the show?

When I arrived at the Q&A at the Mauna Lani Resort in Kona, Hawaii (HawaiiCon has been held there the past two years), I felt a bit apprehensive. For one, there were a WHOLE lot of people waiting to access the small-ish conference room the discussion would be held in. Secondly, when Roddenberry showed up in swim trunks and an octopus decorated rashguard, I was sure he was going to cancel for some beach fun. Fortunately, he suggested that we all head down to talk and relax near the beach. Why spend the day talking about the beauty of star trek in a tiny room instead of spending it outside under the pulchritudinous palm trees?

So, myself and about of crowd of 40 folks (HawaiiCon panels are quite intimate) headed down to the beach and pool area of the resort. As we walked by aromatic blossoming shrubs and decorative ponds filled with orange, gold, and black koi fish, I couldn’t help but think of the crew of the Enterprise taking shore leave on Risa. Ahh, what a way to nerd out!

Roddenberry found a large tropical almond tree on the west side of the pool, just several meters inland from the blue of the Pacific Ocean. We all sat around him quietly on green grass and waited for him to provide any tidbits he could about Star Trek: Discovery. He couldn’t tell us too much, but he was able to confirm a few things and gave us his general impression of the show. Here are some highlights from the Star Trek: Discovery discussion.

Roddenberry made it very clear that his influence on the show was limited and he primarily functioned as a consultant during the production of the series. He watched rough versions of filmed episodes, read the scripts, and provided comments which were provided to the showrunners. He had no creative power over the story or look of the show, just suggestions.

His Star Trek background besides being the son of Gene Roddenberry.

Roddenberry has a podcast where he watches every episode of the Star Trek series in consecutive order and talks about the humanity and lessons in them. He worked on the set of TNG as a kid. His favorite Star Trek series is TNG largely because it focuses on a diplomatic approach to conflict. He buys into that and would rather live in a TNG future than any of the other star trek futures. He mentions that while Kirk is great, he’d “…feel much safer on Picard’s ship than Kirks.” He’s watched all of The Original Series, twenty episodes of Deep Space 9, next to none of Voyager, and the entire first season of Enterprise. Roddenberry contends that he is more concerned with the philosophy of Star Trek than he is with the television shows themselves. Roddenberry did enjoy the movie reboots, saying that they were more action based than TNG, but that he was ok with them. He doesn’t consider himself a producer or a writer nor is he part of the film industry per se. His family’s foundation, the  Roddenberry Foundation, is inspired by Star Trek and he loves the philosophy that his father created.

He’s extremely pleased with the casting of Sonequa Martin-Green as First Officer.

Roddenberry is thrilled with the casting choices on Discovery. He is especially happy with the lead (Sonequa Martin-Green) and thinks that she is amazing, kind, incredibly talented, and definitely “Starfleet material.” He went on to say that the character she plays, Michael, is his favorite character in the new series.

Roddenberry stressed that while the whole family typically watched previous Star Treks in the past, you might want to view episodes before sharing them with your kids. Discovery is full of conflict, and the fights and battle scenes are realistic. There will be sci-fi violence. The series isn’t PG.

Discovery is set 10 years before Kirk and Spock and will focus on the Klingons.

The series has an arcing storyline and will have a conclusion at the end of its 15 episodes. The main narratives in the series will focus on the Klingons and the creation of the Prime Directive. Roddenberry described Discovery as conflict-driven and gritty; a fact he’s had to wrestle with. He explained his feelings, saying that, “I think true Star Trek, and I’ll just call it Roddenberry Star Trek because it’s my last name, is that better humanity. This is a little bit rougher around the edges; you’ve got characters doing things that aren’t necessary Starfleet. Umm, you saw a little bit of that in Deep Space Nine and Enterprise, and I wrestle with that.” Even with these concerns, he’s still excited for the series.

Why do the Klingons look so different?

The leading women of Discovery avoid stereotypes and aren’t damsels in distress.

Discovery has fantastic leading women. According to Roddenberry, these characters are nuanced, complicated, and intelligent, with fantastic leadership skills. He also lets on that they aren’t perfect, as with all heroes, and there are flaws in each character that makes them unique individuals. An interesting fact that Roddenberry divulged was that some of the characters were written as men and were cast as women.

The set and tech of Discovery is amazeballs!

Roddenberry was incredibly impressed with the set and tech of Discovery. He described the sets as being very ornate and detailed with every blade of grass just so. And the tech, or toys as he calls them, looks so real and at one point he stated, “The toys will never be this good. They keep them under lock and key.”

So, is Roddenberry excited for Discovery?

Roddenberry seems pleased with the show though he has some concerns about its grittiness. His favorite Star Trek series remains TNG, but he hopes that all the shows based on his father’s universe will be inspirational and uplifting in some way.

Jahkotta Lewis is a professional archaeologist, an amateur astronomer, and writer. When she is not documenting Pacific Island archaeology, she spends her days hiking through native forests, spelunking within the depths of an active volcano, and watching/reading all things fantasy and science fiction. Follow her on Twitter @jahkotta