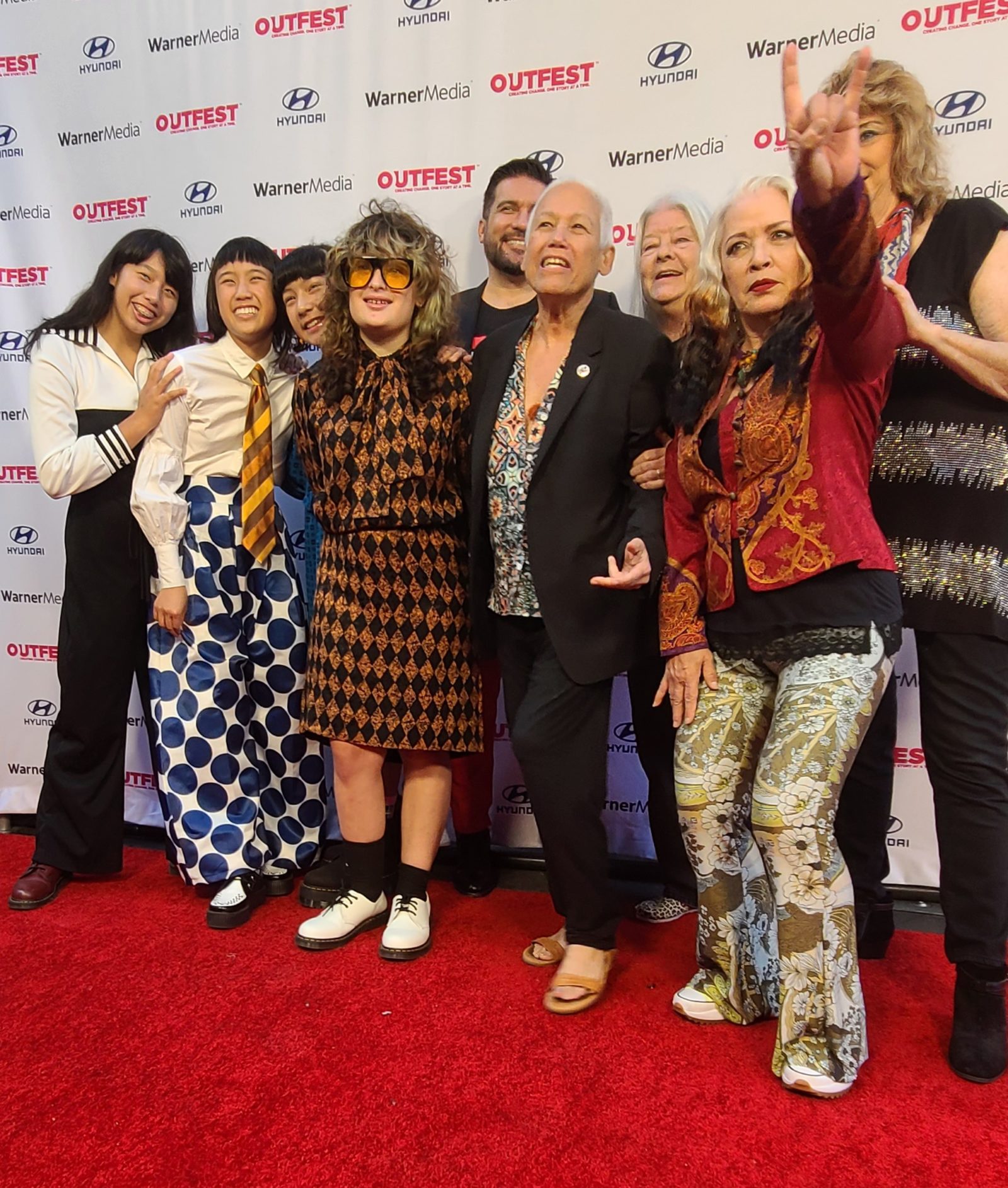 June Millington struts down the red carpet like she’s the queen of the world, and in many respects she is. She’s just finished another round of chemo and radiation to fight her battle with breast cancer, and now she’s ready to rock! “I can still play! I can play my ‘Fanny’ off!” she says irreverently drawing laughs from the growing crowd. June Millington is the lead bassist for the seminal all-female rock band, Fanny. Started with June’s sister Jean when they were teens growing up in Northern California, the band Fanny has endured many changes, but one thing has endured: their need to rock.

Crowds gathered for the Outfest2021 Closing Gala on Sunday, August 22nd at LA’s Orpheum theater to celebrate the premiere of Fanny: The Fight to Rock.  The documentary served as a retrospective of the many changes in Fanny and how they were unappreciated during their time. Fanny was marketed as the female Beatles, but done so as punk and hard rock were redefining the genre. They had to fight through shoddy and manipulative management, insensitive stereotyping, inner band conflict, and a rotating cast of musicians. For the amount of drama and the fact they’d produced five albums, had they been an all-male band they might have been celebrated as heroes. One legend in particular thought so, “They were extraordinary: they wrote everything, they played like motherf-ckers, they were just colossal and wonderful, and nobody’s ever mentioned them. They’re as important as anybody else who’s ever been, ever; it just wasn’t their time.”

That quote, from David Bowie no less, was featured in the 1999 interview with Rolling Stone magazine and made people ask the question, “Who is Fanny?”

“Does anyone want to see a grandma band? Can you imagine us on tour? We’d have to build in naps between sets!” Fanny drummer, Alice de Buhr laughs, but there’s a slightly timorous lilt to her voice. She’s self-confident in her talent, but after decades of not having the voice of her band heard, why should tonight be any different? Each present member has their own way of dealing with this question. Percussionist and lead singer Brie Darling is eager to please and entertain and willing to put her whole self out there. Founding member, singer, and lead guitarist Jean Millington wonders about the effect on her ability of the stroke she experienced, which left the right side of her body paralyzed. While her son Lee Madeloni fills in happily, she still longs to play again. Patti Quatro, lead guitarist, is here for the music and wills off any negativity by getting lost in it. And lead bassist June Millington is ready to kick ass just as hard as she’s kicking cancer.

“I wouldn’t mind a grandma band at all, I think that sounds great,” I offer as words of encouragement. “I mean, look at the grandpa bands out now!” Drummer de Buhr laughs and thinks thoughtfully about her journey to now. She appreciates being lowkey; she’s not so fond of interviews but always takes time to give authentic answers. When I originally called her over, she said, “You wanna talk to me?” Of course, I did! The drummer is the one to keep the beat, they maintain order, and de Buhr’s story is one that deserves to be heard.

“It’s gonna be pretty cool,” she says about the evening. “I thought I wasn’t going to do it. It’s amazing still playing at 72 years old — I almost said no. But then it came together. Bobbi Jo [Hart] made the documentary mainly about Fanny Walk the Earth [Fanny’s latest iteration featuring the original trio of Jean, June, and Bri] and they got everyone back together. When we played, it just clicked.”

Fanny was the brainchild of June and Jean Millington. After being raised for about a decade in the Philippines, June and Jean moved with their Filipino mother and American father to a Sacramento suburb.

“The first time I ever experienced racism was here in the United States,” June recounts. They were outcasts until they started playing the ukulele at school talent shows. Gaining popularity, the sisters formed a band with school friend Brie Darling who is also mixed race. Darling recounts a story of one boyfriend whose father offered to buy him a red Mustang if he broke up with the “half breed.” He accepted.

Gaining notoriety through music wasn’t just a creative endeavor, it was a survival tactic. Their band the Svelts later tacked on Alice de Buhr after Darling left to have a baby, and soon the trio was on their way to Los Angeles to seek legend and fame.

Performing an open night at the Troubadour would cause famed producer Richard Perry to take notice and convince Warner Bros. Records to sign the band. It was just as a novelty act, since they were all girls, despite their evident talent. By this point, Darling had rejoined the band and keyboardist Nickey Barclay was brought on. Perry made the unpopular decision to brand the girls like the Beatles and dismissed Darling from the band, claiming they should just be four members.

It may sound pretty standard, changes in a band, interpersonal conflict, etc., but it’s important to remember that Fanny served a lot of firsts: first all-female band signed to a major record label; first band where 3/4 members were half Filipino; probably the first female band where two of the members were quietly queer. These are all things that today the band would be lauded for; then, these were thought of as barriers to success. Though they did find more notoriety in England, they still had to pretend to have boyfriends, to pretend to play up their sexuality in a hetero way, and to be twice as good at the music on account of them not having the apparent God-given talent that comes from a hanging appendage between their legs.

Through their missteps and growing pains, Fanny served as a blueprint for other female bands on what to look out for and how to fight and have your voice heard. As the godmothers of rock come back into the light, they hope to find a new glory in a generation that understands their struggle and is eager to celebrate them.

“This is a full-circle experience. All of the original members except Nickey Barclay are here. We’ve never played all together, and it’s very exciting,” says Patti Quattro. A late addition to the band (coming on as co-lead guitarist after June left), Quattro was a lifelong musician growing up in Detroit’s Rock City where her entire life was music. “The documentary is fantastic because it’s about these women trying to find their way in a man’s world. We all suffered and struggled the same ways, and it was awesome seeing that played out.”

The performance that evening was loud, bright, and full of passion and love. The adoring crowd gave several ovations and began to chant, “Fanny! Fanny! Fanny!” As the praise poured over the band, Brie Darling took the mic. “Now that’s what we’ve been waiting for!” she laughs as the crowd gets louder. It’s about time.

Want to learn more about Fanny? Check out the Fanny Rocks! Podcast hosted by drummer Alice de Buhr and guests where they deep dive into the lyrics, recording experiences, backstage drama and so much more. Available wherever podcasts are heard. Additionally, for future touring info or to just keep up with the band, visit their website. Updated from a former forum, the website is filled with personal accounts and archival footage that tell the true history of this dynamic band.