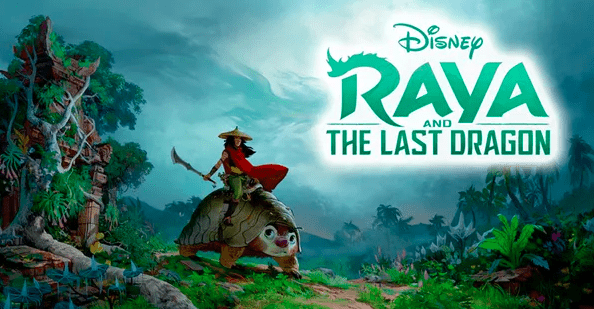 Disney is getting its first Southeast Asian female protagonist, and it’s about time. While Mulan has been a beloved film for generations, it’s so important that Disney represents Asian culture that isn’t just Chinese. The upcoming Disney film, Raya and the Last Dragon, directed by Paul Briggs and Dean Wellins, is inspired by countries such as Thailand, Vietnam, Cambodia, Myanmar, Malaysia, Indonesia, and Laos.

Starring the voices of well-known Degrassi: The Next Generation star Cassie Steele and Crazy Rich Asians star Awkwafina, the voice cast is also showing up with outstanding talent on the screen.

Steele is Filipina-Canadian and Awkwafina is Chinese-Korean. They are successfully breaking down Disney’s long held trend of hiring white actresses to voice characters of color in animated films. There is a level of authenticity that many fans are eagerly awaiting in this film.

There is little known about the movie’s premise so far. Disney has shared that the mysterious realm called Kumandra is part of a reimagined Earth inhabited by an ancient civilization, which is made up of five clans in the land of dragons.

Kumandra is a fictional place that is supposed to exist somewhere in Southeast Asia, and a warrior named Raya seeks to find the last dragon.

Raya teams up with a crew of misfits and embarks on a larger mission to bring light and unity back to the world. She meets a water dragon, voiced by Awkwafina, that can transform into a human. The movie was originally called Dragon Empire and has been in the works since 2018.

To research and appreciate the cultures that inspired the film, the cast traveled to Laos, Cambodia, Thailand, Vietnam, and Indonesia.

While there’s very limited information so far, fans have been treated to the sweet anticipation of some visually stunning CG dragon action with stunning visuals and a groundbreaking voice cast. For most audiences, there aren’t many more reasons needed to get hyped.

The film was originally scheduled to be released in the United States on November 25, 2020, but like most films, the pandemic has set its release date back. The new release date is set for March 12, 2021.

While this is a disappointment, there is still hope for the film to hit movie theaters for the full magic that audiences wouldn’t get if the movie was merely added to Disney +.

With films like the live-action Mulan set to be released on Disney +, disappointing many fans, viewers will have to keep their fingers crossed for Raya and the Last Dragon.

Raya is a teenager who is fearless and courageous. It’s no coincidence that she’s a strong character, as she was created by an ambitious writer. Written by Malaysian-born American film and television producer and screenwriter Adele Lim, the film have been graced by someone with authenticity and cultural pride.

Lim is known for her work on the 2018 movie Crazy Rich Asians and her mentorship with young writers for the Coalition of Asian Pacifics in Entertainment.

There is no question that Raya will carry with her the lived experiences and spirit of the amazing women of color who have come together to breath life into her character.

It’s also important for the movie to run in theaters so Raya can receive all of the accolades that it deserves. It’s not just important that this film will exist, it’s vital that it appears on the big screen for Southeast Asian girls and women to know that they are just as valuable, formidable, and tenacious as any white Disney protagonist.

At Disney’s Raya and the Last Dragon D23 Presentation in 2019, Cassie Steele expressed that she really sees Raya as a breakthrough character in terms of being female and being empowering, being a warrior and being badass. “It’s just such an honor to play her.”

Awkwafina laughed when describing her thoughts on voicing the dragon. “The dragon is fun! I think that it’s a very lovely partnership that happens. The dragon is both dragon and human, and I think that dragons have always symbolized something very important in East Asian culture.”

Steele, Awkwafina, and Lim seem to have become very close. Awkwafina and Lim already established a friendship on the set of Crazy Rich Asians. Their sisterly rapport has only made fans more zealous about the creation of this film with hopes running high.

Disney’s attempt to depict people of color accurately hasn’t always been a winning ambition to say the least.

With the racist Siamese twin cats from The Lady and the Tramp that were not only villainous, but also drawn with narrow eyes and voiced with over-exaggerated “Asian” accents, Disney has a lot of damage to account for.

Mulan definitely did a better job, but there has been a large gap of time since the 1998 film was released by Disney. Meanwhile, dozens of white princesses and heroes have been given movies and prominent roles.

Just as with the rest of Hollywood, white people have dominated animation both on and off screen. With more people of color gaining opportunities to create work that speaks their truths, there is hope for the future.

Films with Black and people of color shouldn’t be every now and then films that are pulled out to be token representation to satisfy a diversity pledge. These characters need to be recurring heroes that are brought in organically and sincerely.

There are no guarantees for the future, but BGN has a feeling that Raya and the Last Dragon is going to inspire a lot of magic and hope, along with bomb animation.