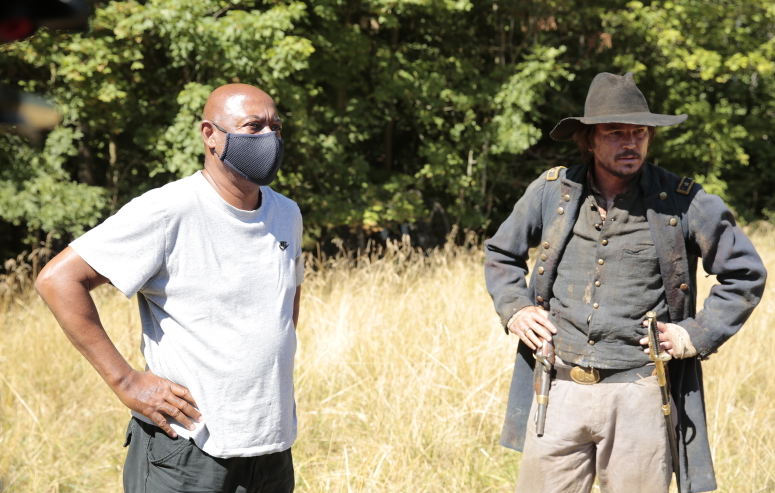 The first time I heard about the relationship between the Seminole First Nation and the Maroons (Black Seminoles) was in the book, What Mama Couldn’t Tell Us about Love: Healing the Emotional Legacy of Racism by Celebrating Our Light written by Brenda Lane Richardson and Dr. Brenda Wade (1999). Africans were kidnapped to what we now call Florida in the 1520s. The British, claimed Florida as a colony in 1763. As white settlers injected themselves on this land, members of smaller first nations united to form the Seminole nation. White settlers built plantations with enslaved labor. The Black population quickly rose, and a number of the enslaved escaped to live in free communities embedded in the untamed Florida landscape. As the communities of self-liberated Black folks grew, they merged with the Seminole nations and were called the Maroons. The Seminoles and the Maroons became family.

In the first five minutes of Raoul Peck’s docuseries, Exterminate All the Brutes, a subtitle appears on screen. “The Disturbing Confidence of Ignorance: 1836 Seminoles and Maroons.” A determined Seminole female chief (Casia Ankarsparre) appears on screen. Unblinking, she says, “This is the day we fight.” The next scene is a meeting between the chief and a male Maroon leader. In this scene we see a true story that the majority white gatekeepers who control Hollywood rarely include in their whitewashed stories about the history of what we now call “America” — Black and Brown living in integrated community, sharing resources, and resisting white supremacy. As they sit in a circle under a modest covering, the Maroon leader humbly offers to run in order to protect the community. The chief replies, “We’re family now. You stay.”  The Maroon leader emphasizes that he doesn’t want to bring harm, to which the chief knowingly says, “They bring harm to our nation, not you.” The white man wants their land by any means necessary. They decide to fight together to protect one another and their land.

Exterminate All the Brutes is a documentary series that jumps time, brilliantly ripping off the facade of “the American Dream,” allowing the audience to face the reality that America was born as a colonial power and to this day operates as one. Peck wrote and narrates the docuseries, so he literally tells the thinly hidden truths of how America came to be. Exterminate All the Brutes holds no punches, defining white supremacy as a poisonous superiority complex that kills nations in order to thrive.

Peck is one of the most renowned storytellers of our time. After completing I Am Not Your Negro, he says that he felt called to make Exterminate All the Brutes, which deconstructs the origins of white supremacy. Now is the right time for this momentous series. Normally, the documentary filmmaker is “outside” of the film. Peck skillfully inserts himself into the story using home movie footage of his Haitian American immigrant family, grounding viewers in relatable reality as he guides us through over 400 years of imperialism and the impact of white dominance and fascism. We need that in order to bear witness to hard truths. Peck is familiar with dealing with dictators. His middle-class family was exiled during the reign of Haitian president/dictator Francois Duvalier and ended up living in Brooklyn when he was a child in the 1960s. Peck narrates, “We traveled a lot because of another dictator, but it doesn’t feel like an exile. I am with family. I am an immigrant from a ‘sh*thole country,’ like he said.”

Three books are the foundation of this docuseries. Exterminate All the Brutes, by Sven Lindqvist, exposes the cruel impact of European imperialism on the African continent. An Indigenous People’s History of the United States, by Roxanne Dunbar-Ortiz, details the Native American genocide. Silencing the Past, by Michel-Rolph Trouillot, is about how Haiti’s independence in 1804 changed the trajectory of the Western world. Peck unites this circle of intellectual healers to create the extraordinary HBO docuseries and credits these authors, who are also his dear friends, as co-creators of the film.

History is remembered by the victors. American history has been reinforced by Hollywood. The Civil War ended in 1865. Moving pictures were invented in 1893, and in 1915, The Birth of a Nation (a white supremacist propoganda film) was the first blockbuster film made in Hollywood. We have generations of Americans who believe in the big lie of Western expansion by Westerns that center one white man killing everyone with a gun.

Peck uses his superpowers as a filmmaker to tell the truths of history from the perspective of the colonized. The docuseries not only uses historical footage and newsreels but also Peck has created full narrative short stories within the documentary to add nuance, humanizing the history.

The white male lead of Exterminate All the Brutes is Josh Hartnett. The character Hartnett plays has no name, but I recognized him immediately. Josh Hartnett is deftly playing white superiority, a character every Black person in America has to endure a daily basis. I have to say, experiencing the way Peck wrote that character and how Hartnett deftly embodies that toxic energy was more frightening than any race-based horror film or series I’ve seen this year. Witnessing the impact of that white man dominating through time was a frightening truth we rarely see told openly. I’m just grateful that I’ve lived long enough to be able to see the truth of this country on screen.

The parts of the documentary that hit me hardest used animation to powerfully reflect the North Atlantic Slave Trade and the Trail of Tears. I will hold those images in my heart forever. Stories give us the opportunity to empathize. We can look past the superficial differences and see we are one people. White supremacy thrives on simplicity. Exterminate All the Brutes is a rich documentary that uses wise storytelling to clearly share the complexity of the system grounded in white dominance that we are all living under.

The documentary is broken up into four episodes, which are really short films.

When deciding to make this film, Peck was encouraged by his friend Sven Lindqvist, who said to him, “You already know enough. It’s not knowledge we lack. What is missing is the courage to understand what we know and to draw conclusions.” As I’ve been watching the Derek Chauvin trial for the murder of George Floyd, Exterminate All the Brutes was a form of catharsis for me. After viewing the entire series, I feel charged up and inspired to continue to do the daily work of dismantling white dominance as our ancestors need us all to do.