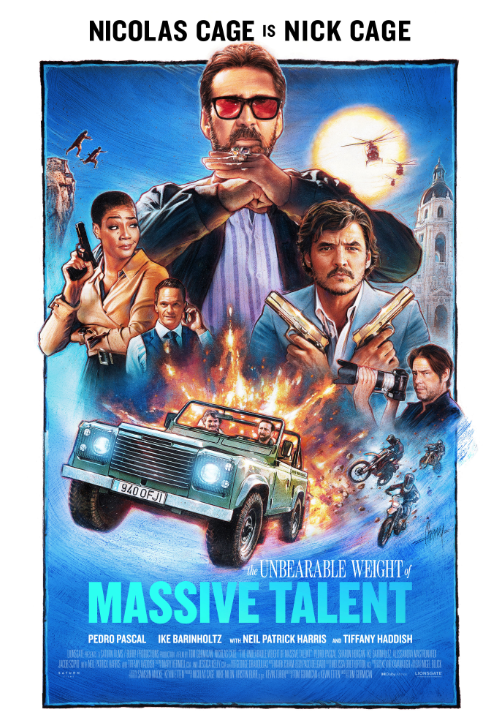 In The Unbearable Weight of Massive Talent, the theme of fan culture is explored as Javi Gutierrez, a wealthy fanboy (Pedro Pascal) offers actor Nick Cage (Nicolas Cage) 1 million dollars to attend his birthday party. For some clarity here, actor Nicolas Cage is playing a fictional version of himself. His character name is aptly titled, Nick Cage. In the story, Cage suffers from money problems and a career that has lost its luster. Cage sees an opportunity not only financially, but in a fan who appreciates and admires his successful path as an actor, which is just what Cage needs at this stage of his life. However, this birthday invite comes with some interesting consequences, and shenanigans ensue when Javi isn’t quite the man he seems to be.

The Unbearable Weight of Massive Talent is written and directed by Tom Gormican (That Awkward Moment) and co-written by Kevin Etten (Ghosted, Workaholics). BGN chatted with the filmmakers on the phone the day after the movie made its world premiere at the 2022 SXSW Film Festival in mid-March. The quirkiness and eccentricity of the story and performances of The Unbearable Weight of Massive Talent were perfect for SXSW. The festival based in Austin, TX is known for its more idiosyncratic selection of features.

Writer/Director Tom Gormican described esteemed actor Nicolas Cage as “the patron saint of strangeness.” When asked to elaborate on what that descriptor of Cage meant, Gormican says, “Everything Nick does is a celebration. From the way he dresses to the way he acts, he believes in what he’s doing and does it with such bravado and competence.”

There’s no question that there is something quite alluring about Nicolas Cage’s presence as a performer. He has several internet memes, from his hair blowing in the wind in Con-Air to the eye-bulging Vampire’s Kiss, where he delivers a maniacal smile. According to some reports, Cage is not particularly happy with these viral memes, as his over-the-top style is very thought out and carefully planned. Gormican has echoed these same sentiments about the illustrious performer and describes Cage’s approach to his work as an underlying intelligence that is thought out. “He’s the most prepared actor we have ever worked with. He’s joyous to be around,” Gormican shares.

As for the writing process, Gormican teamed up with Kevin Etten on the script. For the most part, very few changes were made during the filming process. In The Unbearable Weight of Massive Talent, a handful of movie clips from films Nicolas Cage has starred in were featured in the movie. There were some ideas of what movies to include in The Unbearable Weight of Massive Talent. According to Etten, during the development process more of Cage’s inventory of movie roles were added as clips in the film. Etten says there was one particular scene that added a movie clip from the 1996 Michael Bay film The Rock.

“There is a scene added during script development where [Nick] is at a low point. He sees himself on TV, The Rock comes on, and he snaps the TV off,” Etten reflects. While getting clearances and licensing agreements for the films was no issue for the filmmakers, according to Gormican, the most expensive room to film was the memorabilia room of Nick Cage. Javi, a superfan of Cage, has an entire room — which serves as more of a shrine to devote his affection to Cage’s professional career. This includes prop weapons, costumes, and even a mannequin in Cage’s likeness.

The film includes an interesting oddball character named Nicky (also played by Cage). The lanky, long-haired Nicky is a younger version of Cage and is a figment of the actor’s imagination. The aesthetic and overall look of Nicky is heavily inspired by Nicolas Cage’s own wardrobe and previous press interviews during the press tour for the 1990 David Lynch film Wild At Heart. Gormican describes directing Cage in those scenes as two characters, and working with the special visual effects was a challenge.

“The whole thing was very complicated. I will say that I really enjoyed seeing him play both sides of that character, and being able to inhabit a sort of younger version of himself. He got to go full Cage with that character.”

Going “full Cage” is exactly what you can expect from the wild rollercoaster ride The Unbearable Weight of Massive Talent has to offer Nicolas Cage fans.Fandom at large can fall into a spectrum of celebration and support sometimes, becoming quite toxic. As the story of The Unbearable Weight of Massive Talent unfolds the lines are blurred between fandom being a good thing or progressing to something unhealthy.

Etten believes that overall it hinges on community building in which direction fan culture can grow. “I think, as of anything, it’s a matter of degree. Yes, at some point, it crosses over into an unhealthy place and you’re using this idea of this person to compensate for whatever is lacking in your life. All of that gets projected onto this figure. So when it crosses into that realm, yes, it feels unhealthy. However, I think the internet has shown and allowed groups of people who would never have discovered each other to come together over these shared interests. I think that can be a healthy thing,” Etten says.

As fans come together to share their interest in actor Nicolas Cage and his long roster of films from the 80s till today, it begs the question for every fan to ask the other:

What is your favorite Nicolas Cage film?

Tom Gormican has two favorites: Adaptation and Face Off.

“Two very different sides of Nicolas Cage but two incredibly powerful performances in really different ways. Adaptation is small, interior, and nuanced. It differentiates him and his brother and the characters so perfectly. I’ve watched it again and again. It’s probably why I became obsessed with neurotic Nicolas Cage. And Face Off is just this bombastic, larger than life performance,” Gormican shares.

Kevin Etten also has two favorites: Moonstruck and The Rock.

“Moonstruck because it was a film my parents loved and introduced to me. I know it’s an ensemble piece, but Cage really stands out. The Rock is a movie that I will never turn off and will watch at any point if I see it on television.”

The filmmakers turned the tables on this writer and interviewed me by asking what my favorite Nicolas Cage film was. Of course, without pause, I answered Raising Arizona. Best comedic performance and peak Cohen Brothers too.

And if you’re looking for a comedy with a bit of Cohen brothers flair and ridiculous insanity, Tom Gormican and Kevin Etten’s The Unbearable Weight of Massive Talent is right up your alley.

The movie opens in theaters nationwide on April 15th.