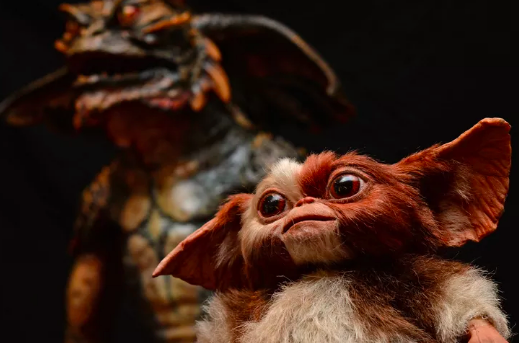 An inventor of wild gadgets can’t get his family just any old normal thing for Christmas, so when Rand Peltzer (Hoyt Axton) finds an exotic animal called mogwai in Chinatown he has to have it for his son Billy (Zach Galligan).

Mr. Wing (Keye Luke), the creature’s caretaker, has no interest in selling it to anyone, let alone someone whose own inventions don’t even work properly. But Mr. Wing’s grandson (John Louie) wants to make a fast buck and sneaks the mogwai to Rand, but not before giving him a strict warning: Keep the mogwai out of bright light, do not ever get it wet, and never never never feed it after midnight. With this perfect recipe for disaster set up in just a few minutes, Joe Dante’s Gremlins quickly fixes itself as a rare Christmas horror movie classic that still terrifies after 35 years.

Back home in Kingston Falls, with its backdrop inspired by Bedford Falls from another Christmas classic It’s a Wonderful Life, Billy is enmeshed in a conflict with miserly Mrs. Deagle (Polly Holliday) who despises his dog and keeps threatening to murder him. He’s also getting an earful from the town drunk and rage monster Mr. Futterman (Dick Miller) who will tell anyone who’ll listen that foreign-made things are destroying the very fabric of American society. When Rand returns home with his furry little gift, Billy gets a brief respite from his problems as he gets to know his new friend, now called Gizmo.

But that moment of Christmas peace is ruined when Billy’s friend Pete (Corey Feldman) accidentally spills water on Gizmo, who multiplies. This second rule of caring for a mogwai broken, it’s only a matter of time before Billy inadvertently feeds the new brood after midnight. He wakes up to find his room filled with oozy green pods that hatch into reptilian creatures headed by a sadistic mogwai called Stripe who go on to terrorize the entire town of Kingston Falls in horrific ways. It never fails to surprise me how violent Gremlins is, and how graphic and gory the encounters are between the little monsters and the dozens of humans they murder in just a matter of hours.

However, unlike its counterpart It’s a Wonderful Life with its underlying anti-capitalist message wrapped in a Christmas movie, reflecting on Gremlins 35 years later reveals a surprisingly conservative message. This message hinges on the sometimes unhinged Mr. Futterman. “Damn foreign cars,” Futterman fumes at Billy when Billy’s Volkswagen Beetle won’t start. “Always freezing up on you. You don’t see that with American cars. You see that plow? Fifteen years old and hasn’t given me a day’s trouble in fifteen years. You know why? Kentucky Harvester. It ain’t some foreign piece of crap you pick up these days. Damn foreign cars.” If Gremlins were made today, Mr. Futterman would likely be wearing a MAGA hat instead of his woolen earmuffs.

Futterman doesn’t stop there, though. As Strike and company are devastating Kingston Falls — this was before social media so it took time for the news of an attack to get around and be taken seriously — Futterman gets wasted at Dorry’s pub and gives Kate (Phoebe Cates) a corresponding xenophobic monologue. “How’d you like to bring your car in for a tune-up and find it loaded with foreign parts?! Gremlins! You gotta watch out for them foreigners because they place gremlins in the machinery! They put ‘em in the cars, they put ‘em in the TVs, they put ‘em in the stereos, in the radios you stick in your ears! They put ‘em in the watches! I got teeny tiny gremlins in my watches!” Kate and Billy convince him to walk home, where his rant continues. “Damn foreign TV,” he growls. “I told you we should have got a Zenith.” This time, though, Mr. Futterman is correct. There are actual gremlins on his roof messing with his antennae, and they subsequently hijack his tractor, demolish his house, and kill both him and his wife.

The transformed feral mogwai are indeed foreign monsters that end up razing huge chunks of Kingston Falls to the ground, torturing and murdering many residents, before they are cleverly defeated by Billy, Kate, and Gizmo.

In the end, Mr. Wing arrives, quietly angry, and reclaims his mogwai, chastizing the Peltzers for all the damage they caused and in particular for not listening to a very simple set of three rules. As Mr. Wing said right at the beginning, the mogwai was not for Rand Peltzer’s consumption and it was categorically not for sale. By removing it from its safe cultural and social context, Rand and Billy Peltzer’s appropriation of this exotic creature ended up with an enormous death toll.

The Peltzers also ended up proving the point of bigoted people like Mr. Futterman who believe that anything foreign is a threat to an American way of life. And this kind of cultural appropriation gone awry is one of the easiest ways to do it. Just look at Florida’s embattled ecosystem thanks to all the people who bought Burmese and other pythons as pets, only to release them out into the wild when they got too unruly, wreaking havoc on the Everglades and, like gremlins, terrorizing all forms of life that live on this tropical peninsula.

Christmas is certainly an easy time to culturally appropriate things as we exchange gifts and want to find extra special things for the people we love. But for 35 years, Gremlins has warned American consumers to think before gifting something that the recipient might love in the moment but not be able to manage in the long term, like baby boa constrictors and green iguanas. Or a mogwai, no matter how cute and cuddly it is in the beginning.