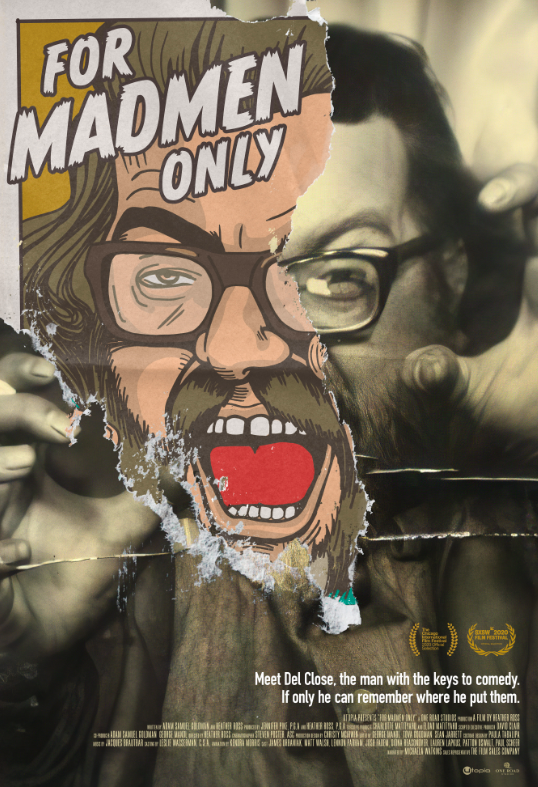 There is a fine line between insanity and genius. This maxim, according to the documentary titled, For Madmen Only, attempts to prove just that for one man, Del Close.

The idea for this documentary was seeded from Wasteland (DC Comics). It is this comic that inspired Del Close’s documentary. The film explores and imagines Del Close’s life with a mixture of audio, visual, and art forms. This accomplished individual has a life that is not very known to most people. Close spent most of his life doing improv and teaching others how to improv, and this dedication to his craft has led to many famous modern names we know and adore today.

The brilliant Heather Ross is a triple threat. She is the director, producer, and writer of this documentary in which she explores the mind of a comedy legend. Ross collaborates with producer Jennifer Pike and writer Adam Samuel Goldman on this project. Together, these minds all help to build a documentary that is as creatively crafted as Close’s life was.

A few key components of the doc are that it utilizes art and images from the partial autobiographical comic Wasteland to illustrate important moments in Close’s life throughout the film. The comic artwork is a delightful touch that helps viewers reimagine impactful events and even how certain conversations might have gone. The most entertaining scenes are the brainstorming sessions that led to the development of his autobiographical comic.

In this hour and thirty-minute film, the mind and life of Close are dissected and examined for our viewing pleasure. Del Close mentored so many modern comedians, such as Amy Poehler, Eugene Levy, Catherine O’Hara, Tina Fey, Jason Sudeikis, and Mike Myers, and of course, there are more. The film outlines his tips on improv, how he developed them, and the important figures in his life. All this is revealed in order to understand the inner workings of his process and himself. How did this man manage to coach so many prominent figures while he himself was left all but in obscurity?

In the opening scenes, the writing staff responsible for the DC Comic Wasteland was hired in 1987, which included John Ostrander and Del Close. The movie reimagines a brainstorming session with Ostrander (played by Josh Fadem), editor Mike Gold (played by Veep’s Matt Walsh), and James Urbaniak as Del Close, where they all snowball ideas, phrases, and keywords to come up with comic book ideas. Much of this documentary is taken from the comic and even used to explain his life in greater detail. While setting out to write his autobiographical comic, the film reaches every aspect of his psyche and takes viewers from the darkest reaches of his mind to the more humorous portions of it.

For Madmen Only does something that really proves to be a more palatable form of telling a narrative. It doesn’t veer away from revealing the nitty-gritty of Close’s life. It does not try to romanticize his life or his experiences. It is a life filled with drugs, alcohol, and mental institutions. In fact, it is more accurate to state that this movie neatly establishes a pathway from Close’s act as a human torch to his experiences at The Second City to even having talking heads talking about his life. The film is pieced together with interviews, audio, and visual clips, one of which features the late Robin Williams, and even a few creative reenactments. It is important to note that all of Del Close’s dialog in this film has been taken from previous recordings. This somehow makes the film feel more autobiographical. While it sounds like a blend of a variety of mediums, which it is, the film itself is actually a truthful account of a man’s life who made many people’s dreams come true.

The level of insecurity this movie shows is what makes this so compelling. In the documentary, it is made clear that Close had insecurities about his own methods. Yet, he was able to push so many people into becoming freer and more open with their comedic abilities. From the plethora of luminary comedians that are interviewed, a few more than a handful get to speak for a longer duration of time. Of course, it would not be possible to have each loved comedian speak long soliloquies, but one who has a greater length of time is Tina Fey. In a brief interview, Fey states, “Del taught me the whole concept of just being bold in your life and being fearless.” She learned how to perform authentically. This speaks volumes as to Close’s abilities, methods, and influence.

This documentary shows the absurdity of one man’s life, along with the greatness it produced along the way. There are times in the documentary that it perhaps feels a little disjointed or slapped together, but maybe that is part of its charm. The way this film goes from one scene to another might just be a reflection on Close’s own experiences. Sometimes things just didn’t make sense at the time, but later it all comes together in a perfect closing scene. Perhaps there is genius in madness, and Del Close shows it is possible.

For Madmen Only is currently streaming on Apple TV+ and Altavod.