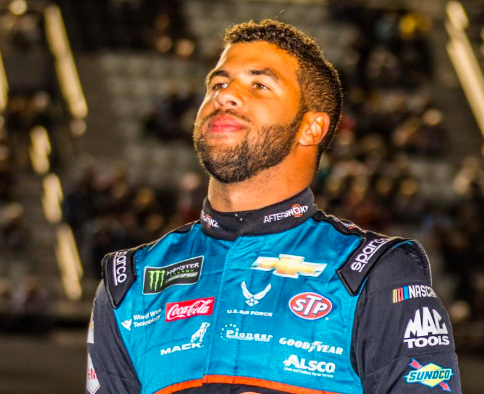 Bubba Wallace is making his own history here in Daytona Beach. Wallace is a current competitor for NASCAR — driving the No. 43 Chevrolet Camaro ZL1 1LE for Richard Petty Motorsports. What is remarkable about Bubba and his journey is that being represented on the raceway as a driver of African descent, he’s carving a path for more fans of color to be curious and interested in joining the NASCAR family. BGN along with a team of journalists spoke with the popular series driver about his career, dealing with adversity — and jumping out of an airplane!

What got you into racing in the first place?

I started when I was about nine racing go-karts. My dad bought a Harley Davidson, and the guy who fixed it up for him raced go-karts and invited us to come out and watch him. We were sitting in the stands, and we had gotten hooked just sitting there watching, so we went out and got a go-kart the next weekend and started racing.

So for those that don’t know, can you tell us a little bit about your journey from the go-karts to national?

There are so many different avenues and paths to take to get started in motorsports. I was always the asphalt oval, what you see here in Daytona but just on a smaller scale. This is a two and a half-mile track. I was racing on quarter miles, 10th-mile marker, a third of a mile track. So it’s very small, very tight close quarters. Racing, we’ve got short tracks.

Two years, every series, moved up to bandoleros, spent a quarter size car and moved up to legend cars, which we call basically a “crotch rocket” and a street bike on four wheels. I still race those things to this day. I’ll race those in the summer just to have a little bit of extra seat time, if you want to call it racing time. Then we got into the full-size car late model stock car, which is the same size cup car, a lot less horsepower, not on a big scale like this. But that’s what’s more common sounding like the NASCAR banner. I was about 12 or 13. And we had to be like 15 or 16. So we may or may not have had a couple of birth certificates, different ages…

We did what we had to do to raise the best tracks, best competition, for about four years. Then we got into the NASCAR ranks of the K&N Pro Series, like the developmental series back in 2010. I was just thinking about this other day. Ten years ago, I was starting my NASCAR journey. And now we’re here, the third year in the cup series. You go through the K&N Pro series, the truck series, the XFINITY Series and now racing on Sundays.

We heard you jumped out of a plane the other day. Tell us what that was about.

Yeah, jumped out of a plane and the parachute pulled. So that was good. Everything that you worry about when you jump, like, I guess the main thing you worry about is the parachute gonna open up, right? But you get up there in the moment and next thing you know, you walk off the plane, and you’re falling, and you’re enjoying the moment. And next thing you know, the canopy opens up, the parachute opens up, and then you’re floating, and 10 seconds later, you’re like, Oh, yeah, it opened up my biggest fear and already happened. I forgot about it. So you quickly forget all the worries that you have, all the bad things that can happen. You just sit there and enjoy the moment. It was super cool. Quiet, once the parachute opened up. You’re floating around right above us for 10 minutes or even seven, eight minutes. I don’t know. A long time. It was cool. We’re sitting there looking. You can see for miles and miles. Really awesome. It’s a really massive plane, and so it was super cool to be inside. There was a total of seven of us, including the pilots, so we had a ton of room. You could have a basketball court inside of that plane, it’s pretty cool.

Can you tell us a little bit more about that and how you’ve been able to persevere?

Yeah, I think we all go through adversity every day, and seems like some may go through more than others. But ever since I’ve been a part of the NASCAR, it’s always been about sponsorship and getting money. It’s a tough, tough sport. Space is based on a lot of money, and it’s kind of like a pay to play. Got to get some money, you get the best rides. If you don’t, then you’re kind of scraping off the bottom of the barrel. So it’s challenging, especially when kids who you grew up racing against and beating them and they come in with money, they get to ride before you do. So it’s kind of backwards. But part of it, you just got to go out there and put that aside and do the best that you can with the equipment that you have. So we’ve strung together some really good races and we’ve had some really bad races, but that’s just the nature of the sport. Like I said earlier about the ups and downs, we have sponsorship battles every day, every year. They told me back in 2013, we go out and win a race — the sponsors will be jumping all over. The next year, no sponsors, so just keep racing. I race because I love to do it.