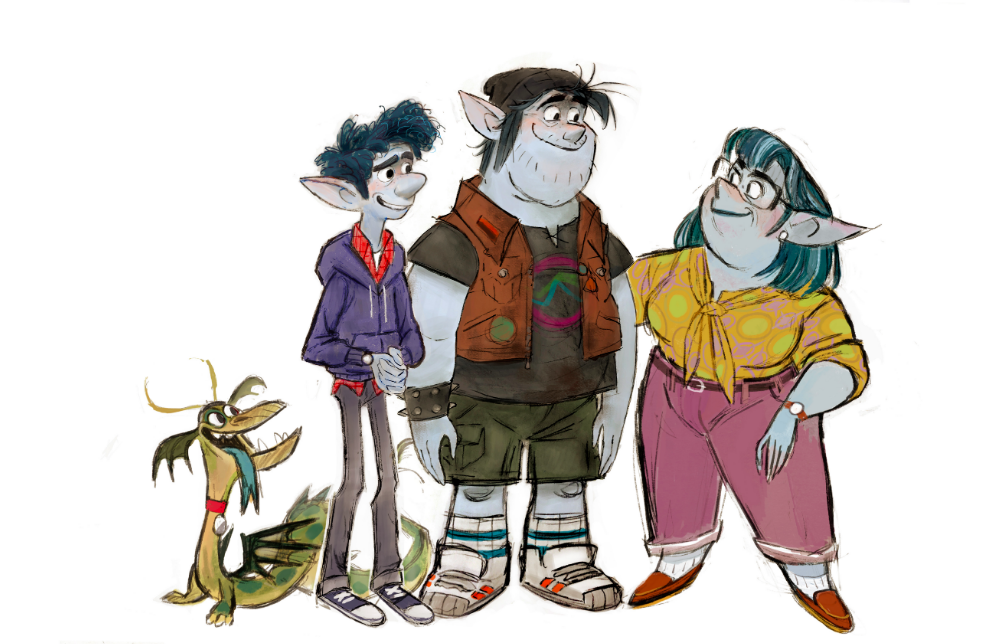 It was an exciting day on the Pixar Animation campus in northern California. Everyone is thrilled to finally introduce audiences to the Pixar animated film, Onward.

During the time there, BGN got to sit in on numerous panels and discussions centered around film. One panel in particular was titled, “From the Fantastic to the Familiar.”

The story of Onward follows two teenage elf brothers, Ian and Barley Lightfoot, who go on a journey to discover if there is still just enough magic left in the world that would allow them to spend one last day with their father, who died when they were both young. The story is a fantasy that takes place in the real world.

During the chat at the panel, production designer Noah Klocek gave us a glimpse into Onward and the suburban world of fantasy through art. He also gave us some insight into what it takes to learn the balance between the familiar and the fantastic, where they start as a team, how they collaborate, and what it takes to get what we see on screen to look like a journey we would love to take.

Noah started with introducing what a production designer and how is it unique to the Onward production. The production designer’s job is to help define the visual language of a film in the beginning. Using the example of a hipster, Noah explained his job with visuals.

“If we saw a hipster in a movie,” he said, “this is a normal story. We understand what a hipster is because it exists in our world; even though they have handlebar mustaches from the 1800s and wear tight shirts and have arm tattoos.” Onward is a different beast. It’s a fantasy movie, so there are trolls and fantasy costumes swirled within. It’s Noah’s job to explain the language so audiences can understand the fantasy elements. The last thing a studio wants is for people to ask questions about when the story takes place, who the character is, and how they’re represented.

Noah went on to express just how much of a challenge this can be. “We also have in our film, an additional challenge that we’re not having only trolls back in time, but we have present age trolls. So, the modern world with trolls.”

This is the Onward story. The art department, the production designer, and many other departments try to build a set of rules or a vernacular or language around this idea, so that when we see a troll in this movie, we understand it’s just like a hipster.

After thinking of the modern hipster, it’s time for the fantasy elements to shine through. The first question the production team considered was, how do you dress a troll? “When we started out,” says Noah, “we had these two really different ideas. One of them is this troll in this fantasy world, and it has no humans in it. The other one is this modern world. How do we find the right balance?”

Research is a key element to the process as well. For our folks at Pixar, there was a small sampling of what they called Sticker Book Fantasy. For those around in the 1980s, it’s called Trapper Keeper Fantasy. “This fantasy is accessible and everyone kind of understands, but it’s not specific,” said Noah. “We didn’t really want to do a deep fantasy like Tolkien or CS Lewis where you had to dive down really deep into it. We wanted to keep it really fun and exciting and really accessible.”

Designing a film is incredibly collaborative. The art department interacts with almost every other department working on the project. One of the main practices used to make sure everything is cohesive is the art review. During art review, the artists and producers get all of the work they’ve done during the week and post it for all to see. They bring in most of the heads of the movie who are working on it, and they talk about the designs and the language.

Noah was able to show us images of an art review that included the VP of lighting. “So we get all of these people in the room,” says Noah, “and we just talk through the art. And try to understand, is this what the movie needs? Is this what the story wants? And hopefully we agree on something.”

Long story short, a film like Onward requires a ton of work and a ton of collaboration. This collaboration allowed everyone to see that perhaps the Midwest wasn’t the best locale for the story. “Everyone said, ‘I think we have picked the wrong place for this,’” said Noah. “So we moved the setting from a fictional Midwest to a fictional giant metropolis like Los Angeles. And that unlocked this language for us and allowed us to really play between the fantasy and the familiar.” Hipster troll in LA, sounds about right.

Of course, this is all fascinating. But, why mix reality with fantasy in the first place? “The story demands a mix of modern and fantasy,” says Noah. As we break down the trailer, Ian and Barley’s dad is going to be created and brought back through magic, but it only works halfway. Ian and Barley need more magic. “We needed to make sure that no one else in the world had magic at the time who could finish the spell for Ian, so that he and his brother would have to go on this journey,” says Noah. So, there’s magic representing the past in a modern world that doesn’t have magic anymore. “We had these two characters who represented those two ideas. Ian was the familiar, with this modern world, and Barley was a fantasy [fan] who wanted to live back in time; a gamer who wants to live in those ancient times,” explained Noah.

Another way modern and magic were explained were through order and chaos. Order was represented by the modern world with its roads and buildings. Chaos was the magic and the wilderness. It mirrors the two characters perfectly.

After the world is set, they all dive in. The production team asks questions like, How much of each of these do we want? How much fantasy and how much familiar? It turns out, that perfect balance for Onward was 30% fantasy to 70% familiar. “We get a crescendo as we leave the city and start to go out into the wilderness,” Noah said. “We can start to play emotionally with that language now that we’ve built it because you got the world and the viewer understands now this language and it allows us to take something like this and translate it back into our hipster.”

Onward is going to speak to the nerd in people on so many levels. The passion Noah had about his job allowed all of us in attendance to geek out a little about the development side of things. Storyboards, computer graphics, and the term “hipster” has allowed us to take a deeper dive into one of many stages of development for this animated film. There’s more to learn and more to see!