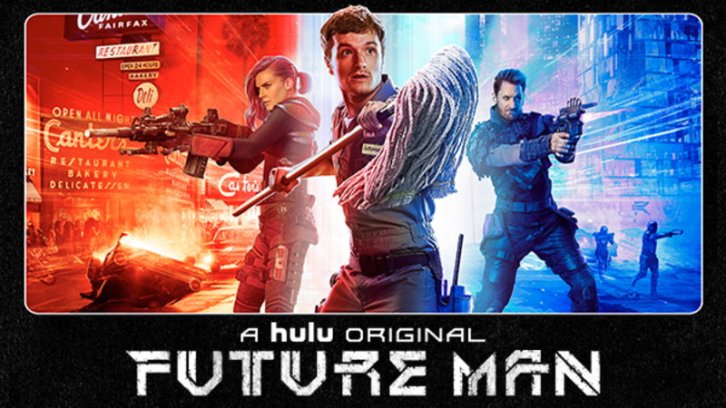 Future Man is an interesting prospect. It’s a half hour sci-fi dramedy that stars Josh Hutcherson in the role of leading man and comic relief even though he’s more known for the action-packed Hunger Games series. The female lead, Eliza Coupe plays a futuristic butt kicker even though she’s best known for her comedic acting in shows like the canceled-WAY-too-soon Happy Endings. Rounding out the main cast is Derek Wilson who we just saw playing Donnie on AMC’s Preacher.

The story of Future Man kicks off when a young janitor, Josh Futterman (Hutcherson) beats a notoriously difficult video game (think futuristic Dark Souls) and finds out that it’s actually a training simulation sent from the future to find soldiers for a war against mysterious invaders. Two warrior emissaries (Coupe and Wilson) show up at his house looking to recruit him, thus beginning their time jumping adventures. The pilot was shown during the Future Man NYCC panel and seemed to get a warm reception from the crowd. There will be more on that later, but first, let’s take a look at what the actors and producers have to say about their new show.

Crystal Sparrow: The gaming community has a lot of politics going on within it with Gamergate and other things. The show seems to have a political element as well, with the resistance fighting. Will there be any discussion of the broader gaming culture coming into the show at all?

Ariel Shaffir: I wouldn’t say that the gaming culture comes in at all. The three of us aren’t familiar enough with gaming culture for us to have integrated that into the show in a responsible way. The video game is a jumping off point for the series, but once he beats the video game we don’t explore video game culture so much.

Question: What role was the most challenging to cast?

Kyle: They all had their challenges, but we lucked out with the three leads. Josh. isn’t necessarily known for comedy but he came in and really surprised us with his physical comedy and his timing.

Ariel: Since we’re jumping around in time, the challenging roles to cast were the younger versions of actors we’ve established so you have to find someone who has the look of a character and can kind of do the voice. So, that was challenging but probably the most fun roles to cast as well.

Question: Can you talk about the freedom you have with a streaming show when compared to a network show?

Ben Karlin: Coming from the world of network television especially network developments you’re really used to being told, “We like these kinds of shows. These are the kinds of things that have to happen. They have to be really good at their jobs.” We were allowed to create the rules of our reality.

Crystal: Future Man is a different production than Preacher but you’re working with some of the same producers. How has the change been?

Derek Wilson: Actually, I flew out to LA and we shot this pilot while I was shooting Preacher, then I went back. So, it was a pretty abrupt change but there’s a lot of the same people, and everyone on this show is so awesome. It was a relatively smooth transition. It’s super fun. Eliza and I look at each other all the time and we’re like, we can’t believe we get to do this.

Question: As you continue to delve into the character of Wolf, are there things you learned about yourself?

Derek: He opens himself up to learning certain aspects of the world, and that’s kind of encouraged me to do the same. He’s a pretty awesome character. He’s like a child. The more I can get back to that childlike innocence, the more fun life can be, so that’s something. 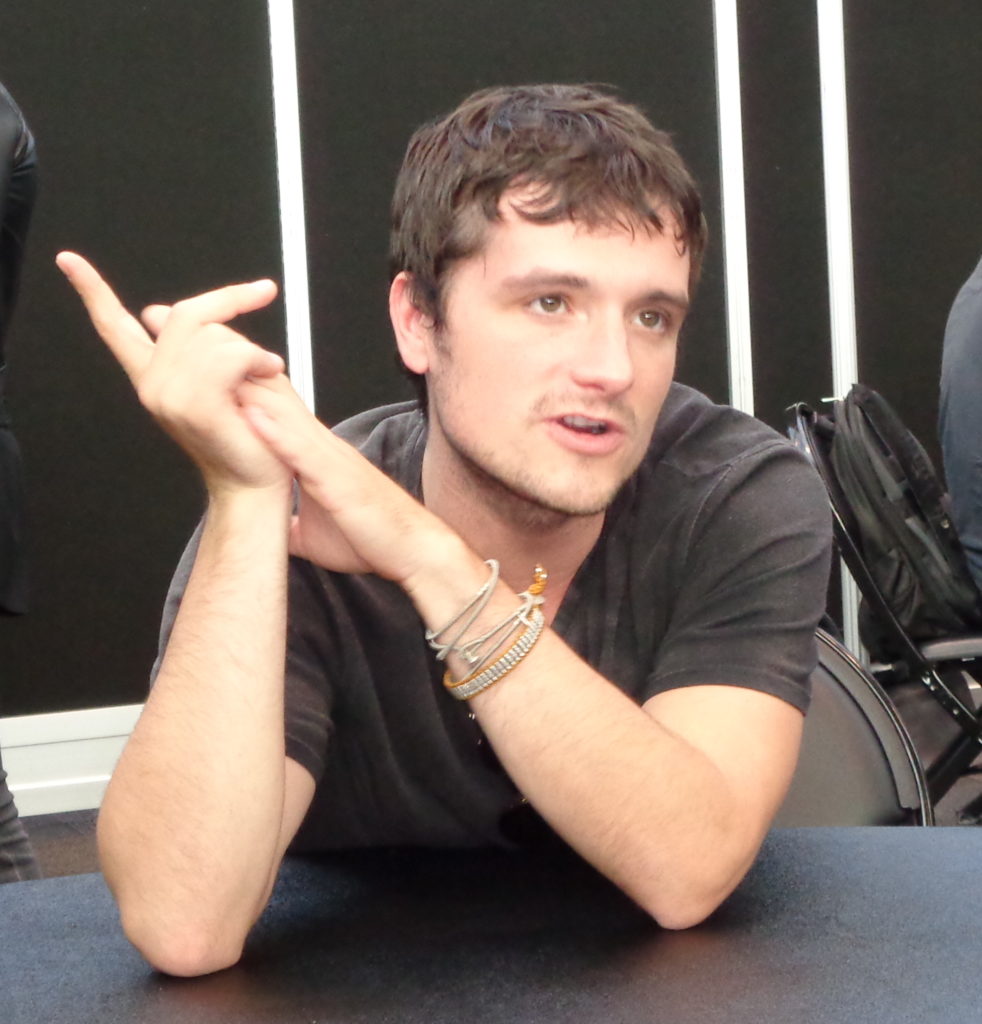 The Future Man Himself Discusses His Character’s Strengths

In the pilot, Josh’s character has some stunning, heroic moments, but they’re all within the confines of his video game avatar. The ‘real’ Josh Futterman is a bit physically hapless.

Crystal: I know Josh takes on the pacifist role but, later on in the season do you get to be a little bit more physical.

Josh Hutcherson: There are some scenarios where he kind of has to be. He doesn’t do a very good job with it. But what’s cool about the story is that while we play a lot with the classic sci-fi hero’s journey tale, this is very much a new take. What ends up being Josh’s strength is his empathy and intellect as opposed to the physicality. He does some cool shit though.

Crystal: Were you at all daunted about the comedic part of the job?

Josh: Yes and no. I’ve never done it before and I was nervous I had to be funny, but the truth is it’s just in the writing. We have great writers and they really got the characters and world. 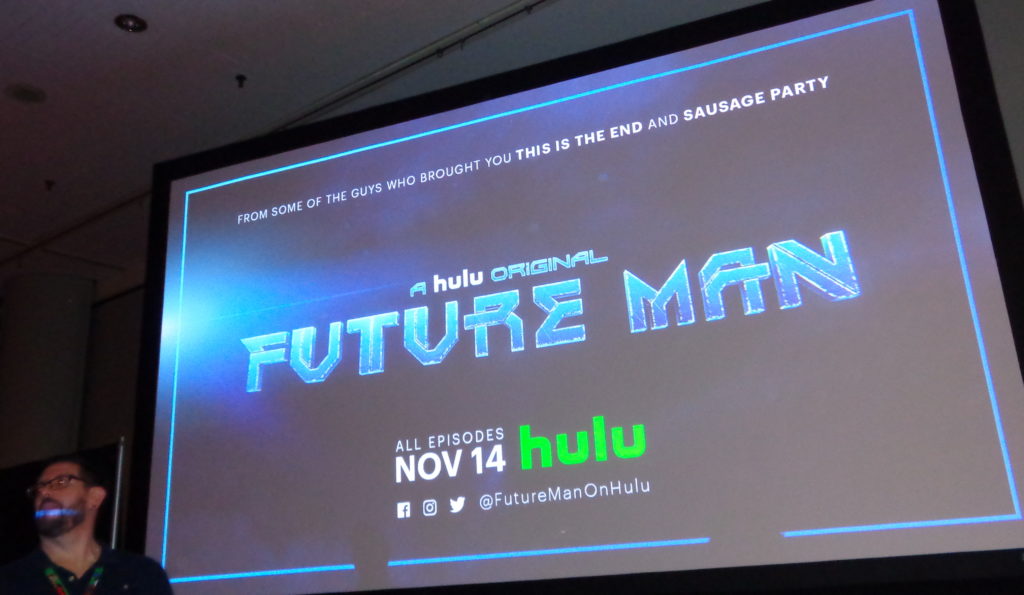 Is it funny? With only the pilot to go on, yes. I definitely laughed at parts and was impressed by the production values overall. Mass Effect‘s space dad, Keith David comes in as an easy going scientist with a nasty herpes blister on his lip whose life’s work is to find a cure for herpes. This is a season-long plot point for Future Man that actually leads to a pretty interesting plot twist toward the end of the first episode. Derek’s character, Wolf really shines.

Is it interesting? Not particularly, but if you’re a fan of fratty, bodily fluid and herpes blister tinged humor you’ll like this. My issue is that with such a dense and fairly unique premise it would be cool to see Future Man in the hands of people who have something to say instead of a team that prides themselves on their ability to push the envelope on crude humor and violence.  I like that stuff too, but Future Man‘s protagonists are fighting an oppressive force and bouncing around in American history. This could be so much more.

Still, I applaud the makers of Future Man for knowing their range. I’d rather them keep it shallow than dig deep and come up with a mockery of true introspection. As was reported by W Magazine, there are no Black writers currently working on any Hulu shows. A whites-only take on American history already has a high probability of being completely insufferable. But even giving them the benefit of the doubt, the line between harmless puerile humor and something more sinister can be razor thin. For instance, the moderator at the Future Man NYCC panel mentioned that Josh does a “terrifying Bill Cosby impression” in the second episode and invites him to do it then. Through some embarrassed laughter and self admonishment, Josh asks Eliza about her water and pretends to put something in it. The crowd eats it up.

At a time where everyone’s news feeds are clogged with Hollywood’s sexual abuse and impropriety, I don’t think Future Man going to fly for lots of folks. But given the popularity of this brand, and the laughs that their Mamoa moment generated, they probably won’t find it too difficult to find their audience.