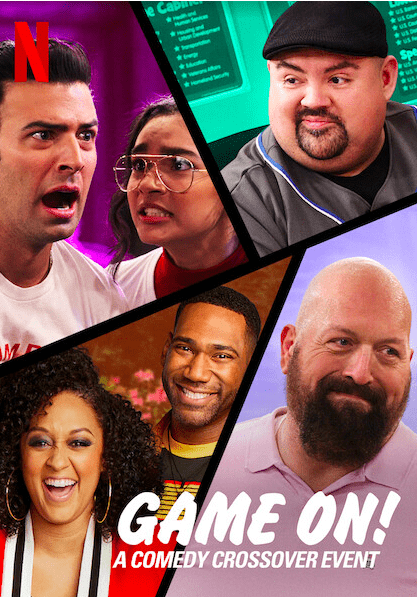 Television crossovers have been quite the events since my childhood. How can anyone forget the Fairly Oddparents and Jimmy Neutron crossover special or the many crossovers on Disney Channel? Let’s not forget CW’s infamous DC show crossover events that keep us rooted to our couches for a week. So, when Netflix brought up that some of my fave Netflix Originals would be crossing over, I knew my Monday afternoon would be booked.

In Episode 1, Cassy (Allison Munn) presents the Garvey Games events to the family, who are quite ready to bring the smack down on another family. Each family gets to represent a country, and unfortunately, this fam got Micronesia instead of USA. Lola (Reylynn Caster), JJ (Juliet Donenfeld), Show (Big Show aka Paul Wight), and Cassy all have their assignments, while Mandy will head off as team manager. Apparently, running isn’t her forte. Cassy has a frenemy in Karine Erickson (Gillian Vigman), which means that there is deep history there. JJ is a smart little bean who is gambling candy on the games. This child.

The Ericksons are team USA. Mandy makes a friend in the mysterious Summer, who is their non-participating family member (NPFM). (I wish that I had that option growing up.) This year’s big-ticket prize is a Wave runner, which Show really wants. After a little trash talk between Cassy and Karine, the hula hoop event begins, then ends when JJ doesn’t try in hula hooping because she bet against herself for this event. Yikes. Show goes against Kory Erickson (Bert Belasco) for the Wave runner while discussing theater. Cute. Mandy finally meets Summer (Giselle Torres) in a classroom full of other NPFMs, and it is heaven.

Pop-A-Shot goes well with Lola in the lead. The Wight family seems to be coming close to the Ericksons this year, and both end up in the finals. Meanwhile, Mandy gets a serious visit from JJ about her emergency candy stash. Show’s bromance is going well when they both decide to take their hands off the wave runner and share it. Unfortunately, Gabe Iglesias was still running in the contest and won instead. That kind of sucks for the guys but it’s great to see Gabe on the show.

The Wights and Ericksons are going head-to head for the relay race event but they need the whole family for this. Cassy grabs Mandy, apologizes for how she treated her daughter, and tells her that she wants her to be a part of the events. Mandy is to be the anchor for the team but freaks out a little about not being a part of the family. Mandy pulls through and wins for the Wights, with everyone cheering her name!

That is, until Karine comes in and insults the child. Apparently, Mandy is too weak to win against her son. Cassy throws an egg at Karine, and that results in her family getting disqualified for unsportsmanlike conduct. Lola tells Cassy a story on how she can figure out her relationship with Karine. (Look at kids teaching adults how not to be fake.) Cassy and Karine talk things through by being honest about how they don’t want to be friends with each other. They unfriend each other on each social media platform and announce that they are not friends anymore. Kory and Show are going to hang out but not be friends. I wonder how that will work out.

I assume I’m supposed to learn something from this show but all I got is not to be fake and all family members matter for sporting events, not to mention that NPFM is a thing that I will try to be a part of in the future.