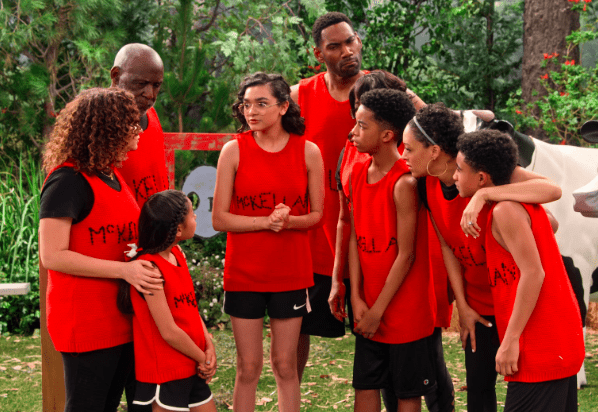 The McKellen family are enjoying a game of Black Card. Grandpa (Richard Roundtree) and M’Dear (Loretta Devine) struggle with new pop culture anecdotes. Jade (Talia Jackson) has her card revoked for admitting being a Swifty. (I would’ve revoked it, too.)

At the park, Jade bumps into Peaches (Elvis’s grandma), Elvis (Lance Alexander), his sister BB (Zion Broadnax), and Ami. M’Dear happens upon them and exchanges words with Peaches (Lunell). They don’t “fool with each other.”

At home, Moz gets a call from Victor stating that he and Ashley are coming down for her cousin’s birthday. Lots of fun. Shaka (Isaiah Russel-Baily) and Mazzi (Cameron J. Wright) want to enter the Columbus Country Games, but Moz is unsure due to bad memories of the events. Jade and Ami are at a loss for why M’Dear won’t let Ami be friends with BB. Moz asks M’Dear why she won’t let Ami choose her friend. M’Dear states that BB is a McCoy and that is enough to get Moz on his mom’s side stating that Ami can’t be friends with BB. When the girls ask why, their answer is “because I said so.” Can’t fight that logic. I wouldn’t even dare.

Cocoa takes issue with Moz’s logic for Ami not being able to be friends with BB. M’Dear states their issue with the McCoys are deeper than any pop culture icon beef there is. Grandpa states that everyone should know why there is beef. Moz’s story has to do with the Country Games where he got into a fight with a Lil’ Mama McCoy (Shondrella Avery) after getting tripped, and the two families were banned from the games for twenty years.

While out playing hopscotch, BB and Ami get caught by Butch. Shaka and Mazzi state that they aren’t a part of the feud  but Butch (Daniel Curtis Lee) acts out  which dissuades them from being close to Elvis and the McCoys. M’Dear and Peaches arrive to see what the drama is all about. M’Dear claims that Peaches tripped her back in 1996 during the games, and they got into a fight. Peaches claims that M’Dear’s story is not true. The two women used to be friends back when they were younger. Peaches had a crush on Grandpa but M’Dear ended up dancing with him at a party that Peaches couldn’t make. The grandkids decide to settle everything at the Country Games which M’Dear and Peaches agree to, considering they are no longer banned.

Back at the house, Victor and Ashley are enjoying the southern hospitality when their cousin Rico (Brian Jimenez) arrives with his wife, who happens to be Lil’ Mama, a McCoy. Rico doesn’t want any issues with his wife and urges Victor to leave. Ashley, however, is in love with the cake and states that she is now a Garcia-McKellan. (I feel her. I’m almost married to food, too.) Cue the McKellan fashion show between Cocoa and M’Dear to choose a family uniform. While the family wants Cocoa’s design, they go with M’Dear’s. Face off between the McCoys and McKellans, Elvis chooses not to join, Ashley and Victor have chosen their sides, and Ami and BB are the cutest friends ever. Moz and Victor still will be friends.

While the games are going on, Grandpa notices that Ami has disappeared. Butch notices that BB is missing as well. The two families stop playing to search for the two girls. Back home, they gather for prayer together and find them in the house. Elvis was with them, too. The two families decide to stop fighting. M’Dear apologizes for stealing Grandpa, thus ending a war. Cocoa suggests that next year, they come together as a super team to win the Country Games.

Honestly, this was the best episode of the crossover. Family Reunion always has me giggling. Victor and Ashley do well in the mix. I would like to see them all interact with each other again. I was expecting a little more of a linear storyline to bring the episodes together. Clearly, the games and rivalries were what they were using as central stories. It was a cornball family fest, but they were cute episodes.