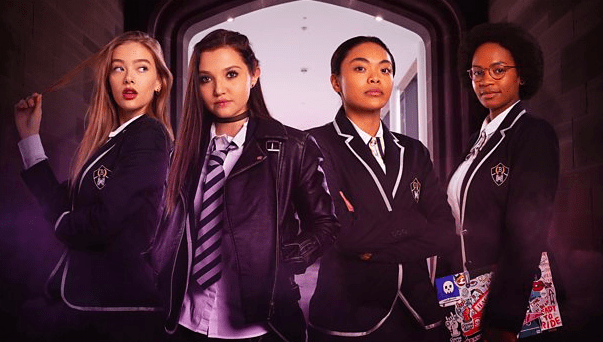 We are starting a new recap of the British series Get Even currently streaming on Netflix. Let’s dive into episode 1 “Get On It”.

At a Bannerman Independent School assembly, Kitty Wei’s (Kim Adis) voiceover informs us that she and others (Bree Deringer, Margot Rivers, and Olivia Hayes) all have different wants but had a common goal. They want justice.

The first target we see is Coach Creed (Jack Derges) of the rugby team. The girls hack a video originally made by a rugby boy named Rex (Joe Ashman) and instead show the coach verbally bullying players. A little hardcore for students but you know, go ahead and flex.

Later, Kitty is invited by her soccer teammates to a big party the night of, despite the fact that they have practice as early as 8:00 a.m. the next day. Margot happens to be a gamer girl who is invited to the party as well by a cute geek by the name of Ed (Dylan Brady). Ed also tries to recruit her to the debate team. Bree overhears Coach Creed getting suspended just before she’s called in to be reprimanded and threatened with expulsion for skipping classes. Olivia prepares for the party with her friend Amber while they discuss boys, but it seems there’s a little something between the two. I wonder when they will admit those feelings.

Kitty’s parents actually urge her to go out and have fun at the party, you know because she has already prepped for tomorrow. Her sister looks a little sad, though. When Kitty arrives, we get to see Bree (Mia McKenna-Bruce) and Olivia (Jessica Alexander) in their elements. Kitty chooses to sit with her friend Mika (Emily Carey), and they discuss her not being able to focus on boys due to her busy schedule. However, Margot (Bethany Antonia) is at home gaming when she hears her parents talk about how she never socializes and isn’t normal. Not cool, but it makes her think again about joining the debate club. Olivia’s friends discuss who could be a part of DGM when her boo Dante shows up but isn’t happy to see her. He does get excited to stand and talk to Kitty, though. The two have a lot in common (student council and scholarships) and decide to leave together because Dante isn’t in a partying mood. That will have a huge effect, especially since Olivia watches the two leave together. Bree’s little friend John (Isaac Rouse) seems to have a crush on her and she doesn’t see it.

The next day Kitty finds out her friend Mika is the talk of the school. Ronny (Joe Flynn), a guy Mika likes, sent himself a photo of her in her underwear. Apparently, she has other photos as well. Mika states that Kitty left her when she needed her the most. Too harsh. Kitty doesn’t get the team captain role but lies to her family about it. Her sister doesn’t seem to believe it. She wants to be like Kitty but Kitty wouldn’t want that for her sister. The school would ruin her. Kitty sends out an appointment for DGM to go after Ronny. Despite their six-week rule, they decide to go after Ronny before he possibly exposes other photos of Mika.

Setting this all up is pretty impressive. I enjoy that the girls are very different from each other but are capable of doing all this work to tear down those who are seen as bullies or worse. I’m hoping that their differences aren’t the reasons why they fall. That is, if they fall. I’m kind of getting Pretty Little Liars vibes from this show.