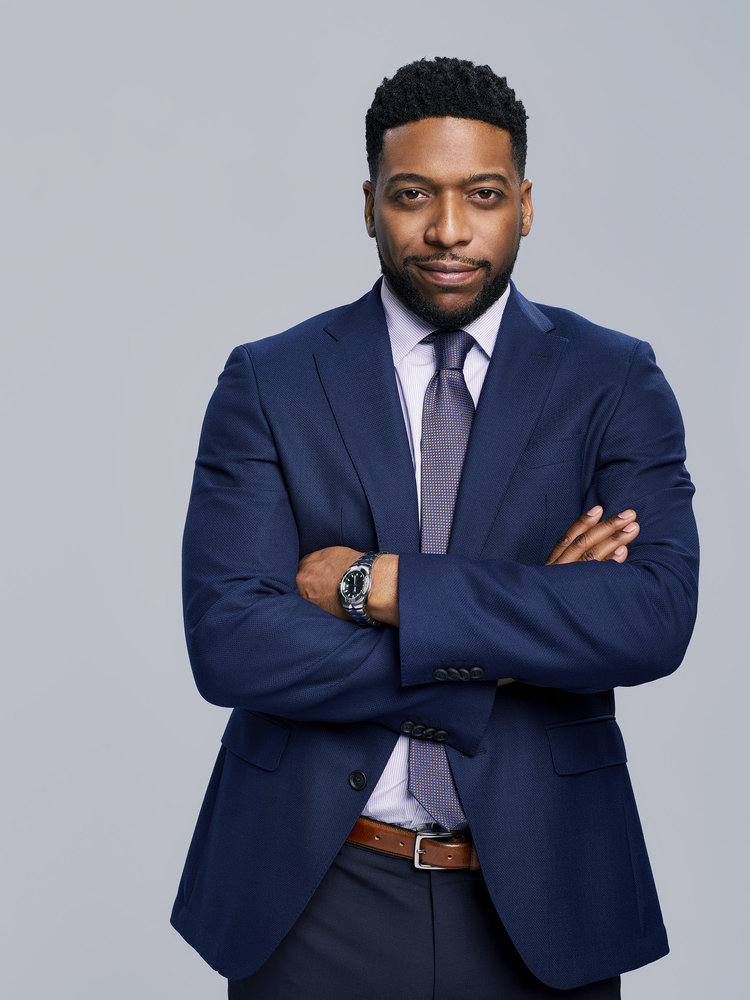 I follow Jocko Sims’s adopted French bulldogs’ Manu and Gino’s NYC adventures on IG, so it was delightful to meet their human “dad” and get to know the gifted actor who brings Dr. Floyd Reynolds, heart surgeon, to life on NBC’s New Amsterdam. The prime-time medical drama is inspired by Dr. Eric Manheimer’s memoir, Twelve Patients: Life and Death at Bellevue Hospital. At the end of Season 2, Dr. Floyd was off to the West Coast with his fiancée, but in Season 3’s premiere, Dr. Floyd is back.

What is it like to shoot an emotionally intelligent medical drama, in NYC, during this pandemic?

It’s quite an emotional, heartfelt connecting type of experience to be able to tell these stories, and it’s also an honor to be able to represent people who risk their lives day in and day out, compromising the quality of their lives by missing out on their families to save us. And sometimes we as a country weren’t always appreciative. Some of us didn’t wear masks. A lot of times people in our leadership downplayed things, said things weren’t a big deal, and this was how we repaid them. It’s just…for me to have a job as an actor right now, I can’t think of a greater one. Then to be able to remind people this can happen any time, we’re not out of the woods yet, it can reverse, so let’s wake up and tell some good heartfelt stories and remind us all to love one another.

That leads me to my next question. Even though all of us will face health challenges at some point, our culture can lack compassion for people dealing with medical issues until a medical issue becomes personal. Has your level of empathy and compassion grown being a part of the New Amsterdam family?

Thank God, I come from a family where we have empathy and we care. My mom in particular. We can’t talk about any social justice issue without her crying on the phone and getting really emotional. When I lived in LA, we would go to Skid Row and bring food and water bottles down to the unhoused. But what I have found being on this show and having this particular type of platform is I have access to be able to do more. And it’s really really cool. Just even during the pandemic, it was lovely for us to donate all of our masks and PPE from the show. Then personally on a couple of occasions, I bought nurses and first responders some lunch. Sent some pizzas over to Bellevue. I’ve been able to do things for the Elizabeth Dole foundation, which focuses on military families and kids and raises money for children. Also, being in this position has shined a light on some of the aspects of things that I didn’t know. I’m learning constantly every season watching this show. So, I can actually center my focus on particular issues, and that’s been great.

New Amsterdam covers issues that are inside the patient’s and the physician’s perspectives simultaneously. The writing is excellent and can be very technical. Are the scripts set or are there a lot of last minute changes?

We used to have it where the writers would come out during the episode. Now they’re really not letting people do that due to covid, but we like to try to have it all together. But I remember the first episode where my character tells Bloom [Janet Montgomery], “Hey, listen, we can’t take this further because I want my wife to be Black, I want my kids to be Black,” and when I read it I was like…. Ummm…you really wanna see this? Who wrote this? David Schulner [the head writer] called me up and said, “How do you feel about this?” I was like, “I feel like it’s a little harsh because I was concerned about the ramifications of the backlash of the other side; people saying, ‘Hey, well, that’s racist.’” Which, maybe if the roles were reversed, maybe you could say it is. But we got that conversation sparked up and it was great. But he said, “How would you say this?” And I added some to it, and it was a little bit of a collaboration. What that signaled to me was that the door was always open.

But we let them do their thing. And sometimes there’s a question or something once you get there and you try to work it out but it’s not making sense. The writers, God bless ’em, they’re in California, you know. They’re not able to be there on set and see how long it takes to go down a particular hallway and get a speech out. So we have to make some adjustments. So we Facetime them and get that squared away. I really have not seen anything like this before. They’re all intelligent. The writers room is full of all walks of life. I mean, we have veterans in there, we have people of every color…the United Nations in there of every sexual orientation…and you can feel it in the writing.

Okay, you are now among a wonderful fraternity of elite Black TV doctors. My question to you: Of the following TV doctors, Denzel Washington, St. Elsewhere, Eriq La Salle, ER, or Isaiah Washington of Grey’s Anatomy, who is your favorite?

Okay so, St. Elsewhere was a little bit before my time. I probably have to go for Eriq LaSalle from ER because hey it’s NBC, also known as National Black Channel. [Laughs.] Also every time I think of Eriq LaSalle, I think of him with that Jheri Curl in Coming to America.

You’ve been booking roles consistently, since 2003. What wisdom would you share with Black actors out there who are navigating their way through the industry right now?

First and foremost, understand, now is the time! This is it. Create and use your voice to write. Sometimes you get that good feeling from just creating, and that’s enough. There’s that. Get out of your own way. We have a lot of haters, all of us in life, but the most detrimental one is the voice in your head that says you’re not good enough, now’s not the time, you’re not tall enough, you’re not light enough, anything that you can think of that kinda hinders you. The Last Ship is a good example. I didn’t wanna go audition because I had never played a military guy who’s tough as nails and getting on everybody. I was struggling with it because I’m nice, I’m kind, and so I was like, nah. My friend, she said, “Just go.” Every once in a while, even though I appreciated the manager and agent getting me an opportunity, I’d try to get out of an audition. My real fear was rejection. So, I go in there, I start, I mess up, and apologize. Then the casting director said, “Everybody is struggling with this role.” I didn’t think of that so I tried again. I go in there, I do it, I leave. Didn’t hear anything for a couple of weeks. Then, I got a call back, and they hired me for five episodes. At the end of the first season, they made me a series regular. I was on that show for five years. Had I not gone back in, I don’t know if I’d be here now on this show. So, all the young people out there, believe in yourselves. It sounds cliche but I’m living proof it’s not cliche. It’s real. Work hard and block out.

That would be me. Wanna meet them?

And then I got to virtually love up those adorable (and perfectly behaved) French bulldog brothers on Zoom. Jocko Sims returns to NBC’s New Amsterdam Tuesdays at 10:00 pm EST on NBC. Follow Manu & Gino on IG: @manu_and_ginobili @jockosims