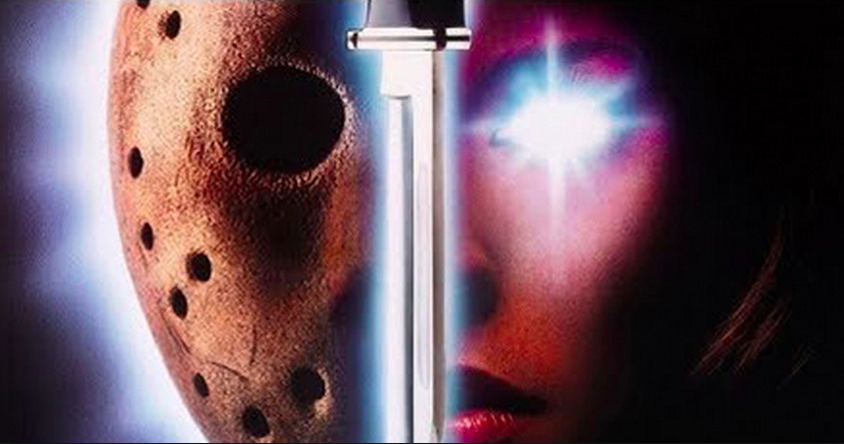 In 1988 one of the most feminist horror films of all time, Friday the 13th Part VII: The New Blood came out in theaters with high hopes of its producers and creators. Their goal was to elevate not just the Friday the 13th franchise — but add to the growing canon of intellectually-based horror films.

Would you believe Frederico Fellini actually considered directing this movie? It’s true. They hoped this one would win an Oscar. And you can almost tell.

The New Blood follows young Tina Shepard (Jennifer Banko) who accidentally killed her alcoholic and abusive father. He drowned in the infamous Crystal Lake. Years later, adult Tina (Lar Park Lincoln) is still a hundred kinds of messed up. In the meantime, her telekinetic and pyrokinetic powers provoked from the early trauma have only increased. Her therapist Dr. Crews (Terry Kiser) suggests to her mom Amanda (Susan Blu) that Tina return to the site of her father’s death to confront the experience. But Dr. Crews has malignant designs of his own. He wants to put Tina into a psychological crisis so he can more dramatically document her supernatural powers. Tina’s first night at the lake is horrible and her feelings of guilt intensify. As she wishes for her father’s return from his watery grave, she wakes up serial killer Jason Voorhees, who has been chained at the bottom of Crystal Lake for years.

Thus the Jason vs Carrie premise was born, and way ahead of its time.

This installment of Friday the 13th is unique for so many reasons. A big one is that the social commentary isn’t relegated to its usual slasher tropes of sex leading to death. It’s not just Tina against Jason, it’s Tina fighting patriarchy at the same time. She killed her father after he hurt her mother. Her doctor is terribly gaslighting her and she actively resists, choosing to have faith in herself and what she knows rather than his alternate narrative. Sidney Prescott in Scream was not the first slasher heroine with a sex life, as many mistakenly promote: Tina Shepard, in fact, is the first sexually active slasher babe who doesn’t die. And like Sidney Prescott as the Scream films progress, Tina is angry, bitchy, sad, and conflicted. Tina is afforded more agency than most women are in movies in general, let alone the slasher/horror genre. She survives to the end to defeat yet another monstrous agent of the patriarchy in Jason Voorhees.

In so many ways wicked Dr. Crews is a worse monster than Jason, who kills indiscriminately like a zombie shark or other unnatural predator. Aside from the abominable gaslighting, Dr. Crews forces Tina to do things she constantly tells him she does not want to do, like being filmed and recorded. He has no concept of any kind of consent, and his unethical behavior goes so far as to threaten to institutionalize Tina against her and her mother’s wills if she doesn’t comply. There is also something in Tina’s rage gaze that hints Dr. Crews has taken other liberties with her. When the bad doctor finally meets Jason, it is a satisfying smackdown indeed.

But nowhere near as satisfying as Tina’s thirty-minute battle with an unmasked Jason. She is so much stronger than him, you almost feel sorry for Jason by the end. Jason stalking Tina might not be personal to this serial predator, but in the context of Tina’s story, it sure becomes personal. Her survival is not just resistance. It is an outright rebellion against the male forces trying to tear her apart both psychologically and physically.

The New Blood is also the longest we’ve ever seen Jason’s mangled face on the screen. Through this feminist interpretation of the film, I read it as another example of how toxic masculinity is ugly as all get out. Toxic masculinity is grotesquely violent, too.

While Tina does have a consensual love interest in the film — one who actively pursues her instead of the other way around — she doesn’t rely on him. One of my favorite scenes is Tina coming down a busted staircase after Jason’s rampage. Her boyfriend Nick (Kevin Blair) keeps his hand out the entire time, reaching for her to help. Tina ignores him and uses her own upper body strength to squirm past the hole. Go, girl.

Yes, the acting is sometimes hokey and campy like all of these early installments of the franchise. Yes, there is still disproportionate female nudity and totally gratuitous sex scenes. Yes, the majority of other women in this film are firmly embedded in sexist roles that also call out the patriarchal bargain so many women make because of the benefits it affords them. The contrast between Tina and her female peers in this movie couldn’t be starker. But still, the message of Tina’s immense power and survival against agents of said patriarchy overwhelms the negatives of this film and its production.

This 30-year-old movie was made for the current #MeToo and #TimesUp movements, and in a lot of ways is still ahead of the times. There is even a Black couple, and they are among the last to die. People like to credit Terminator 2 with breaking that racist Hollywood gimmick. It happened in The New Blood a whole three years earlier.

I also love that this film can totally stand alone. It even comes with a handy recap at the beginning with all the key events from films one through six in case you need a refresher or don’t want to revisit the entire canon before watching this socially-conscious seventh film.

Aside from its overt feminism, The New Blood is also a valuable exploration of childhood trauma and abuse, and how these events will shape us for the rest of our lives, usually for worse. Returning to the scenes of those original crimes is a tricky thing to navigate, even without a serial killer on the loose.