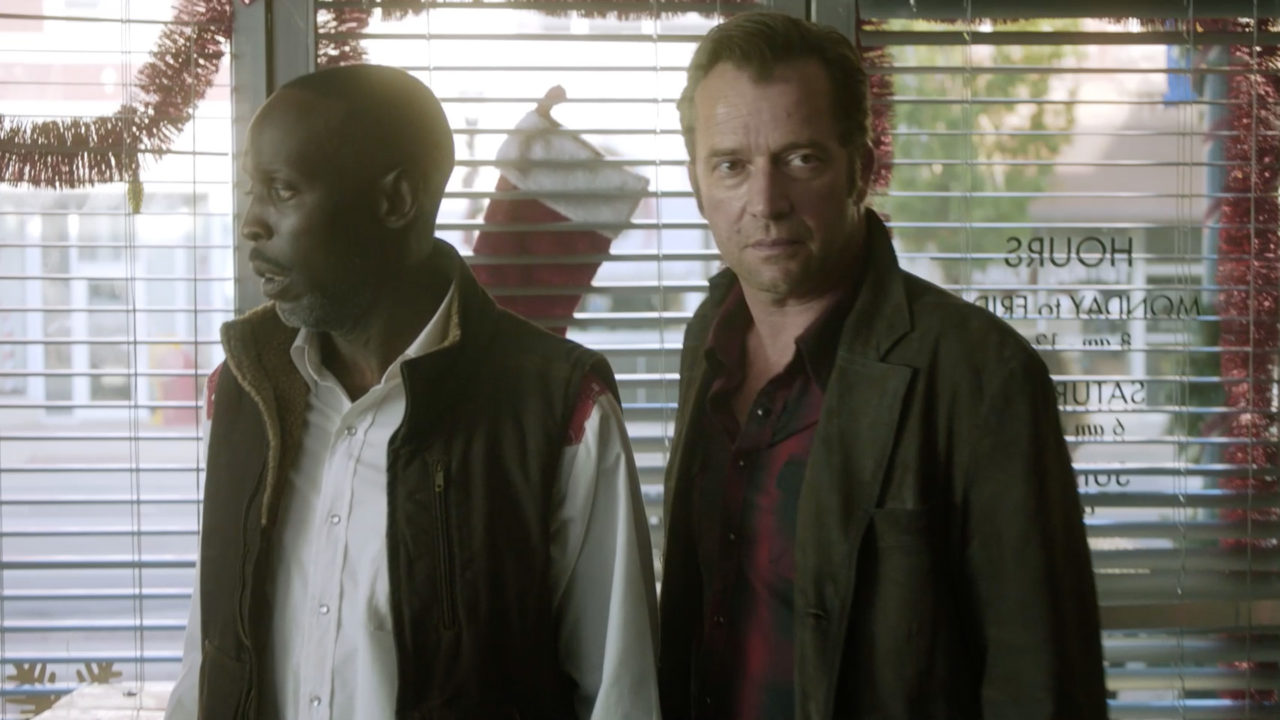 At the end of the season two, Hap (played by James Purefoy) and Leonard (Michael Kenneth Williams) were taking Hap’s new pickup for a spin on the Texas backroads. They passed by a home has that picket fence, clean lawn, pickup in the driveway, and a blonde woman hanging laundry on a clothesline. It could be a postcard for “Mayberry America”. That’s what you think until the camera pulls back, revealing that the clothing she is hanging is actually Klan robes—like KKK-white-supremacy-since-slavery-ended Klan. Suddenly, the wholesome image is sullied. If you are a melanin abundant American, like me, that image is that stuff of nightmares.

Meanwhile, Hap and Leonard’s orange truck is motoring happily down the road.

If this ominous segue to season three “Two-Bear Mambo” doesn’t set the tone for you, then the opening of the season should. It’s the story of how a bluesman made a deal with the devil to get his guitar skills, a deal that ended with a KKK massacre. The show jumps from massacre to Hap and Leonard are shown, badly injured in a car racing back to their homes. Leonard can hardly walk to his house. The two men who have been through so much in the last two seasons are also scared, no terrified. They lock doors, close the windows and sleep with guns. A flashback to three days before comes next. Thus, this entire season is about what happened to these two over the course of a few days. There’s Klansmen, blues legends, and a lot of violence, all of which take place over the Christmas holiday.

This story, this legend, is the reason why Hap and Leonard are in KKK territory at Christmas. Their attorney Florida Grange (Tiffany Mack) had gone into the Klan-infested town and disappeared. She was working on a case involving Soothe.

The KKK storyline is not that big of a stretch for the Hap and Leonard series. Leonard is a black, gay man living in East Texas and his best friend since childhood is Hap, a white man, straight, with a thick (sometimes hard to stomach) accent. They are always exchanging barbs as Leonard tries to point out the racism and injustice and Hap dismisses it as another one of Leonard’s hysterical notions. Hap may seem dismissive, but he is listening to every word Leonard says. He shows it by later referencing the slight, slur, or offense made to his best friend. It’s almost like the dismissive language is a notification that the information has been received and filed.

Leonard watches out for Hap in a similar way in the black communities they encounter. These people are wary of white people, as their relationship with the white community has been an insufferable one, to say the least. Some carry a downright hatred of whiteness, while others are hesitant to engage, having been hurt in previous engagements with local white people. Here, Leonard shines, first introducing Hap as some wild character, like a mentally stable or someone else who is no threat to the black people the men engage. By the time people realize that Leonard was wrong, they’ve already seen Hap do something that makes him not just a white person, but a white person who will go to bat for black people.

This season, however, race becomes a bigger character as Hap must not only navigate the dangerous Klan town dynamics to finish the job and find Florida, he also has to keep his black friend alive. Leonard is never one to shy away from injustice and being in a town where even the black community is content to stay in the shadows and accept the white supremacy can’t keep him quiet. This only escalates the danger for the men.

“Two-Bear Mambo” serves up another interesting side dish on race—the issue of complacency and how it fuels the white supremacy machine. The sheriff (played by Corbin Bernson) is the biggest enabler here, as are the white townspeople and the members of the black community. All of these people could come together and easily overthrow the KKK in power. However, the citizens both black and white are content with letting the robed racists do what they do and accepting things as a part of life in an East Texas small town. Watch closely, because the show will make a grand commentary on the subject later in the season that is easy to miss.

Hap and Leonard: Two-Bear Mambo will not disappoint or leave you with a dull moment. Get ready to leave every episode wishing the next was up on Netflix ready to binge. If you are new to the show, the coarse language and dark often vulgar humor might be a bit too much to stomach. This show is more like Call Saul or Shameless. Every viewer will be riveted as season three crawls underneath the post-card perfect small-town image to expose the racist, co-dependency that keeps everyone suffering and bleeding under the smile they flash for tourists.