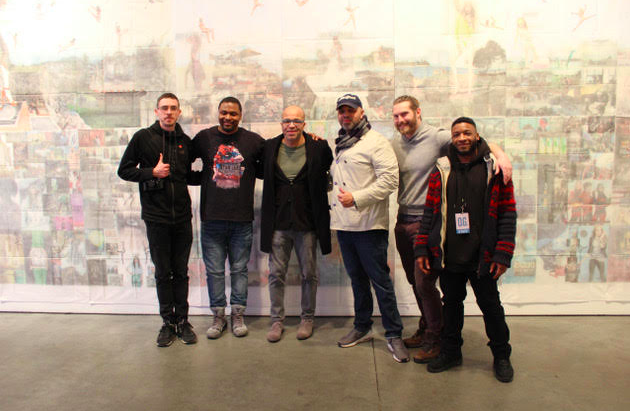 On the last night of the pop-up exhibit’s residency in New York City, Wright visited The O.G. Experience, inspired by the HBO film he stars in, O.G., which premiered on February 23. Five of the featured artists, including co-curator and co-chair Jesse Krimes and co-chair Russell Craig, were on-hand to give Wright a private tour. Wright called the exhibit at Studio 525 “powerful” and “converting past limitation into mind-opening image & story.”

About The O.G. Experience

The O.G. Experience, an unprecedented art exhibit, was open to the public in Chelsea from Feb. 20-15 and showcased works exclusively by formerly incarcerated artists who seek to uncover important truths about the history of our prison system: the legacy of the slave trade; a “war on drugs” that unjustly targeted black communities; and a bail bond system that allows local jails to imprison people who have not been convicted of a crime.

The pop-up at Studio 525 offered a uniquely honest and evocative insider narrative about the United States prison system. The U.S. has the highest rate of incarceration in the world: we currently imprison nearly 2.3 million people; nearly a quarter of the world’s prison population. This is a human rights issue of epic proportions that needs to be addressed urgently, and with the expertise of those most impacted. The O.G. Experience intends to spark a conversation about the staggering effects incarceration has on our communities (both inside and outside of the penal system) and raises critical questions that will lead us to actionable solutions.