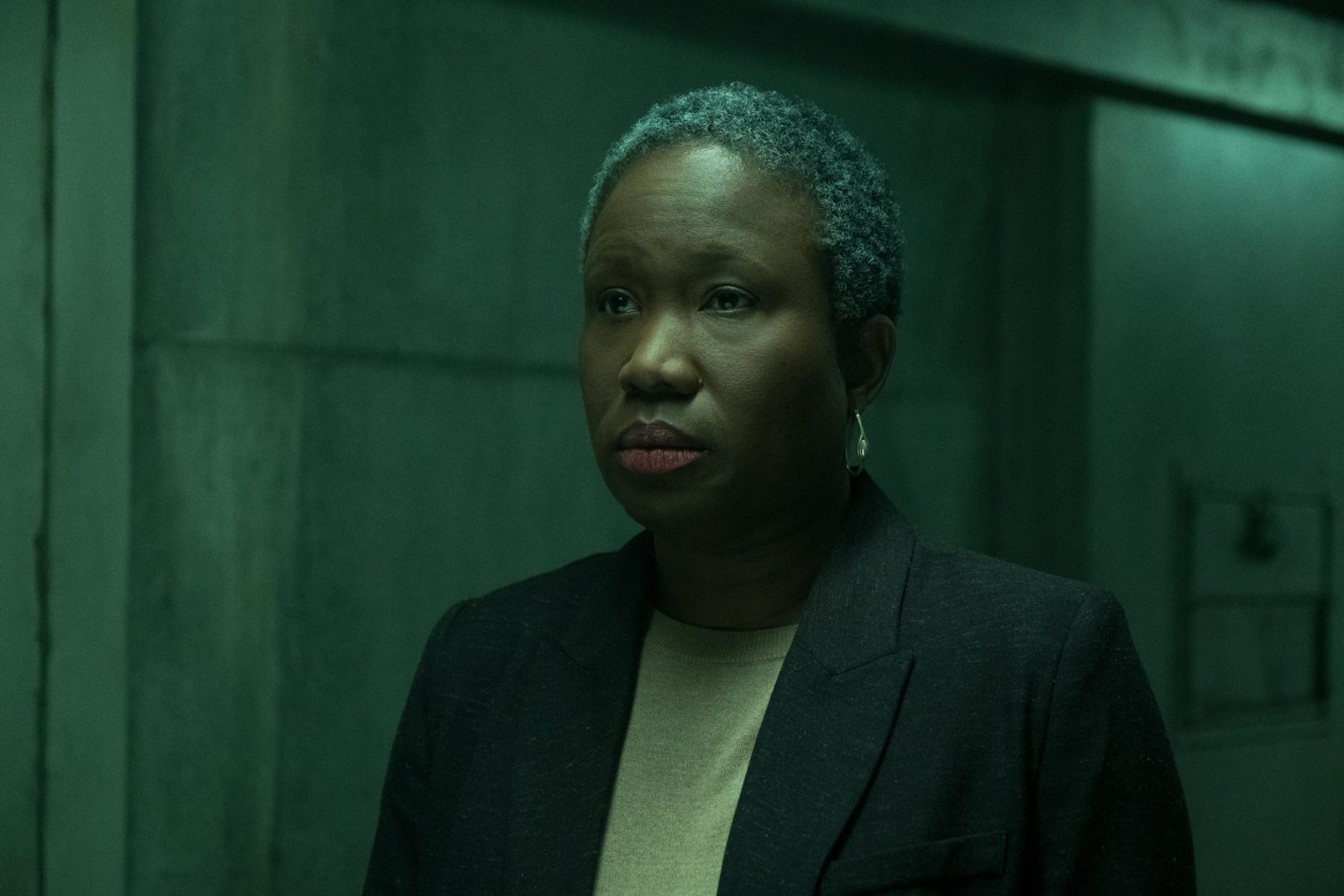 Scattered, dead, bloody bodies of frat boys is the money shot before we see a young man running from a hooded figure. Said man sits on a chair and one of the bodies rises and approaches the man, stating that Daimon has been warned. Hooded figure states that there is more to be done and wants the woman brought to him. Dad wants his wife back?

Ana wakes up from a dream of her coughing up blood. She receives a call from Daimon questioning what Ana did to effect Victoria to bring her back. Daimon wants them to work together to help Mom stay this way. Ana reluctantly agrees. Caretaker surprises Ana at the lobby of her hotel. She’s not happy he’s there but answers his question: Dad has been released and is alive. Her plan is to track and kill him but Caretaker thinks she can’t take Dad on alone. Ana is willing to tell Daimon, but I doubt that rage will last.

Victoria truly seems to be back. Daimon looks hopeful, while Ana is shocked to see her again. When Daimon mentions going outside, Victoria has a meltdown stating that Father will be here soon. Quickly, Mother comes back just when Ana talks about leaving. Victoria needed to get the warning out, which is the first Daimon is hearing of Dad’s returning. Looks like Dad is back for Ana. Dr. Hastings and Gabriella join the siblings to discuss Dad’s return. Gabriella researched the past to find previous possible survivors: a woman by the name of Zoe, who survived being attacked by Dad. Looks like we need to find her. She could be the one that got away.

Dr. Hastings hides medication before entering her office to find Caretaker there. He feels like something is up and also wants to meet Victoria. The siblings and Gabriella are on the road when Ana questions Gabriella’s life as a nun, celibacy and all. She doesn’t look the part. I’m more curious about Daimon’s wild streak. Caretaker seems to want to take care of Victoria but Dr. Hastings wants to continue treatment in a holistic way. According to Caretaker, people are worried about the siblings being together. Who knows what they unleash. Mother allows for Caretaker to get a look before shutting it on his face.

Zoe is a paranoid woman, gun and all. Gabriella speaks to Zoe about talking about her experiences. Zoe shuts the door on them but as they walk away, it seems someone is talking to her, then she lets them in. Remember the frat boy that lived? Yeah, he’s watching from afar. At the hospital supernatural beings are instructing a patient to kill Caretaker all through games. Scrabble is a mess. Gabrielle takes the lead on talking to Zoe. She looks so hopeful. Zoe talks about the day, which affects Ana, who seems to be remembering that day as well. She takes a moment to walk to the bathroom and continues seeing things as she goes. Is Dad around?

Zoe continues to tell the story of a little girl who seemed lost, looking for her dad, then shortly after that, her dad arrives. Daimon checks up on Ana just when she is looking for someone else in the house. The two argue because Ana thinks something is up with Zoe. I believe her. She confronts Zoe then touches her, to no affect. The three leave when Zoe grabs a gun and kicks her out. Ana informs them that she doesn’t believe Zoe because Dad burned the girl alive. I think Daimon should trust his sister a little bit more.

Caretaker invites himself to lunch with Dr. Hastings. They are kind of cute. Mother causes for the alarm to go off, causing patients to be directed out. Caretaker gets attacked by a patient during the evacuation. Dr. Hastings tries to help but is kicked away. Caretaker is able to get the patient off and finds the good doctor’s medicine, too.

While all this is happening, Mother is doing some serious meditation and levitating. Ana is laid out on bed, remembering what involvement she had with Zoe’s death when Mother’s voice can be heard. Damion and Gabriella discuss what happened and Ana. Gabriella tries to assist with the sibling situation, when Damion realizes that Ana could possibly be going back to the house to prove him wrong.

Dr. Hastings has cancer, and Caretaker has figured it out. She states that her replacement is Gabriella but Caretaker wants to know why she didn’t tell him. I can’t tell if they are friends or lovers. Ana is out clubbing and reading people through a touch. She’s definitely looking for someone but is found by Jake, who seemed to have shot someone in the past. She’s about to leave with him but then notices Zoe at the club, too. She goes after Zoe but not before taking out an upset Jake. At the house, Daimon and Gabriella are looking for Zoe and Ana. He goes upstairs, and this girl foolishly goes down into the basement and cellar, alone. A woman with a half-burned face happens to be in there, pouring gas on the floor who claims to be Zoe.

Zoe questions Gabriella on the whereabouts of her sister, Aubree. You see Aubree was who the group was talking to earlier. Zoe recognized Ana. Ana isn’t being very smart chasing this “Zoe” into abandoned places but whatever. Gabriella calls for Daimon to help once Zoe lights a match. The two successfully get Zoe out with the help of his powers. She informs them that a college kid came to them with an idea to help. There’s a trap setup for Ana.

Aubree is probably getting a visit from Dad. Aubree’s guilt has become revenge. She looks pleased on the trap. Dad headbutts his daughter, cue the horrifying supernatural fight between the two. Ana should’ve listened to Mother. While Ana is knocked to the ground, he attacks Aubree. Did the girl think she was going to be okay with a demon? Zoe witnesses it, then jumps down a couple stories to get away from Dad. Luckily, Damion arrives.

While chowing on tacos, Caretaker aka Henry points out that Gabriella won’t be able to handle what is about to come. He and Dr. Hastings had the job of keeping the siblings apart for the sake of the world. If the family reunites, who knows what will happen.