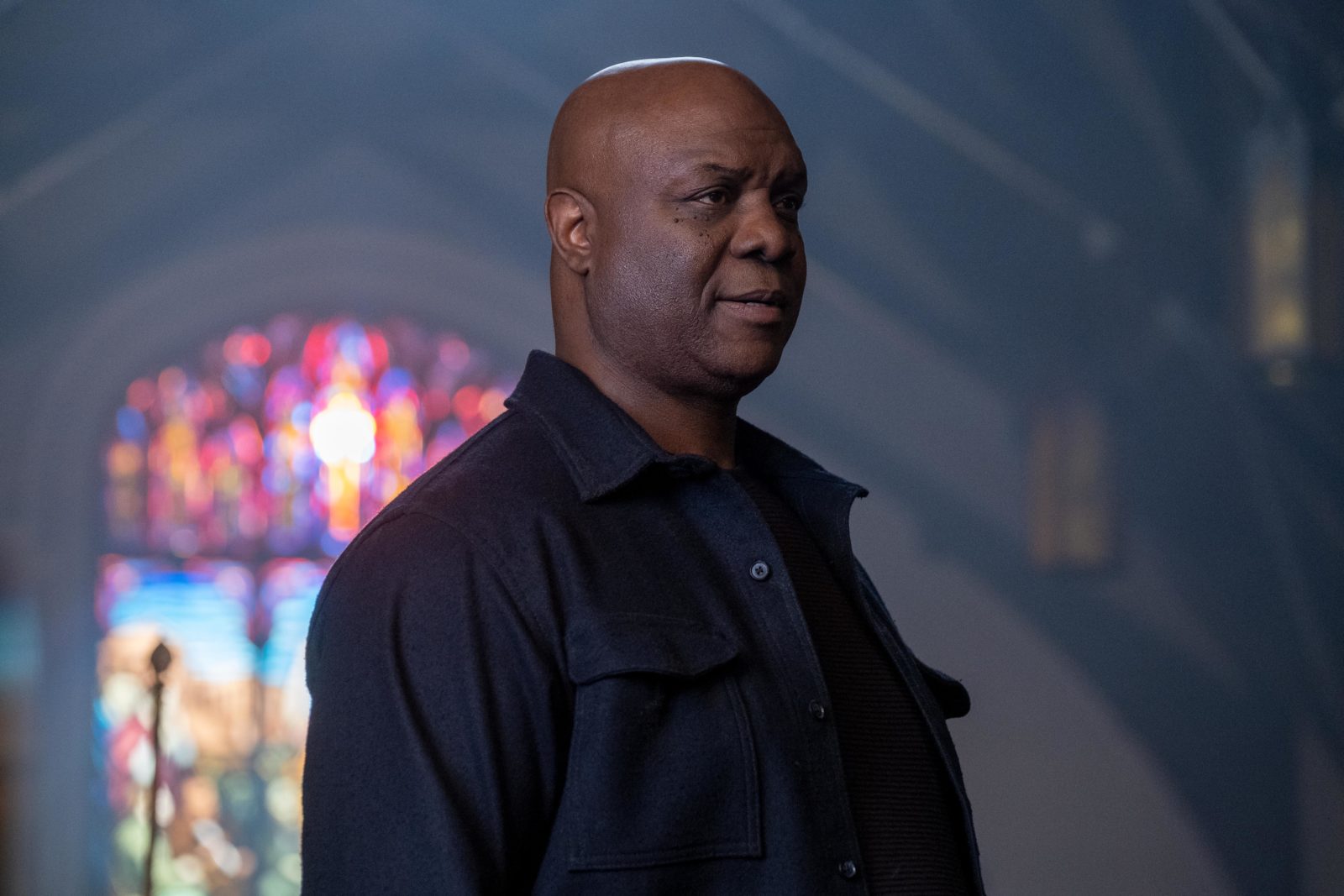 Gabriella says a prayer at church. I will admit that organ music freaks me out. She says a confession. She was sent by the archbishop sent her to watch Daimon and report all unnatural experiences that he and his family produce. Things have gotten complicated because she can’t judge Daimon for his sins as she learns more about what is happening. At some point the priest gets possessed and questions Gabriella about her sin. He asks about lust and gets real creepy. Ah, the demon shows himself and tries to attack her.

Earlier that day, Gabriella was doing some planting, Daimon is running, Ana is crashing at Daimon’s, Dr. Hastings is struggling with her medication, and Caretaker is leaving donuts in the back of his van(?). Gabriella arrives at Daimon’s and gets hit on by Ana but brushes it off. Dr. Hastings comes over, too. Caretaker makes an appearance as well; the siblings aren’t happy to see him. Daimon announces that Dad is truly back but in a different form. They talk about how they can’t kill Dad but need to find another Keeper demon to sustain him. Ana hops up to get the skull, and Daimon is right behind her to make the case of why they all need to go with her. Chris isn’t answering her calls. He should be full on possessed by now. Gabriella doesn’t believe in capturing people’s soul and, if it is possible, it is immoral. Caretaker is adamant that Dad is pure evil.

Back in real time, Gabriella is saved by Caretaker. Lucky that he does his homework on the people he works with. In San Francisco, the siblings find that Chris isn’t around and the alarm isn’t set. Down in the room of artifacts, there is blood and a very dead brother of Tate but no skull. And no Chris.

Chris goes to a chained up door that is under a park. He looks dodgy but I would, too, if I were doing evil’s work. Caretaker takes Gabriella to what I can only assume is a hotel of supernatural fighters. We do find out that Keeper demons have rebelled against their own. Ana can’t believe that Chris attacked the man and walked off with the skull. Daimon want to call the police, but Ana reminds him that there are bigger concerns right now. He can either help to clean up the body or leave. Dr. Hastings checks on Victoria who seems to be deteriorating. She makes plans to take Victoria outside. I don’t think air is going to help…

At the hotel, there are people who are possessed hooked up to medical machines. The Blood run the hotel; they are a group of people who fight and keep track of the supernatural. They put the possessed in medically induced comas so the people don’t suffer. They stay like this forever. Ana uses her abilities to take the dead body and crush it to a compactable shape. She’s uninterested in talking about what she experienced with Dad. Mother enjoys the sun as she reminisces about her past with her children, who she adored but she does not want to think about who took them. Dr. Hastings asks who Mother is. Her response is that she is Kthara, a woman betrayed by those she loved.

Ana and Daimon get a visit from an officer who happens to be Chris’s boyfriend. Officer Derrick thinks that Daimon could be the reason for Chris’s late nights. A little trust goes a long way. The answer to that question is underground with spiders. Chris is unimpressed by the spot but takes out the skull. Derrick is not happy with the way that the business is run. It doesn’t respect Chris’s life. Ana apologizes and informs Derrick that she sent Chris out on an appraisal overseas. Derrick takes the explanation but informs her he can’t take the bull anymore. Daimon questions Ana on the type of business that she and Chris run, stating he knows it’s not about the art. Ana doesn’t say at first but then reveals that Chris helps her kill people. Like Father like daughter?

Gabriella makes a case for all the people’s lives, stating that Daimon can exorcise them but Caretaker isn’t about that. Ana’s case is that she kills people who do wrong. Daimon can’t believe that she could do something like that to people, even if she thinks they are worth it. Chris is ingesting spiders as he pierces the skull’s teeth into his skin. Baby is not okay. Mother is refusing to go back into her room, stating there is something different in her room. Dr. Hastings tries to bargain and finds out that Mother has given her cancer. She will take the cancer away if they take out whatever is in her room.

Ana is by her little box, when Daimon checks on her. The trinkets in the box give her pain that she uses to stop people who cause that kind of pain. The box was a gift from their mom, to keep jewelry in, but Ana used them to store the presents that Dad brought home, thinking that he was showing her love. Their mom hated the box but never threw it away. Daimon wonders if Ana ever thought about returning the items to the victims’ families. Ana never wanted them to know that these people were killed by a serial killer. No, her plan is to bury the box with Dad.

Just as Gabriella is checking on the priest who attacked her, he awakens and tries to get out, begging for her to help him. Caretaker pulls her out. She wants Caretaker to stop what is going on but this goes back seven generations. She is upset to find out that Dr. Hastings knows about this facility. Daimon uses his powers to burn the body that is in a box without burning the box alone. It surprises Ana, but I want to see what else he is capable of.

Dr. Hastings gets questioned by Gabrielle on what and who the Blood are. The girl is not happy to be aware that the church may be in on the ancient line that is the Blood. Poor Gabby can’t let people die, but saving people means demons coming back and torturing others. She may not agree with the methods taken but needs to remember that they have a common enemy.

Ana is back to being cold and distant with Daimon on their arrival in Portland. He wants them to work together but Ana is fine; she goes back to her hotel. Daimon finds that Magoth is possessing the college student who is in his house enjoying donuts. Magoth comes in peace to make a deal with Daimon: Ana for their mother. Tempting offer, but Daimon doesn’t take it. Things literally start flying around his house when Ana arrives just in time. The two siblings work together to exorcise Magoth again. She gets to see what he really does. Poor kid is finally free of the demon.

Chris and the skull seem to be right under Mother’s room, which is torturing her. Looks like the Keeper is good. I wish Ana would be more caring to Daimon and that Gabrielle would just roll with the punches and accept the way things are happening. Honestly, I want more of the sibling power combination. A little family reunion could be fun for me, the viewer.