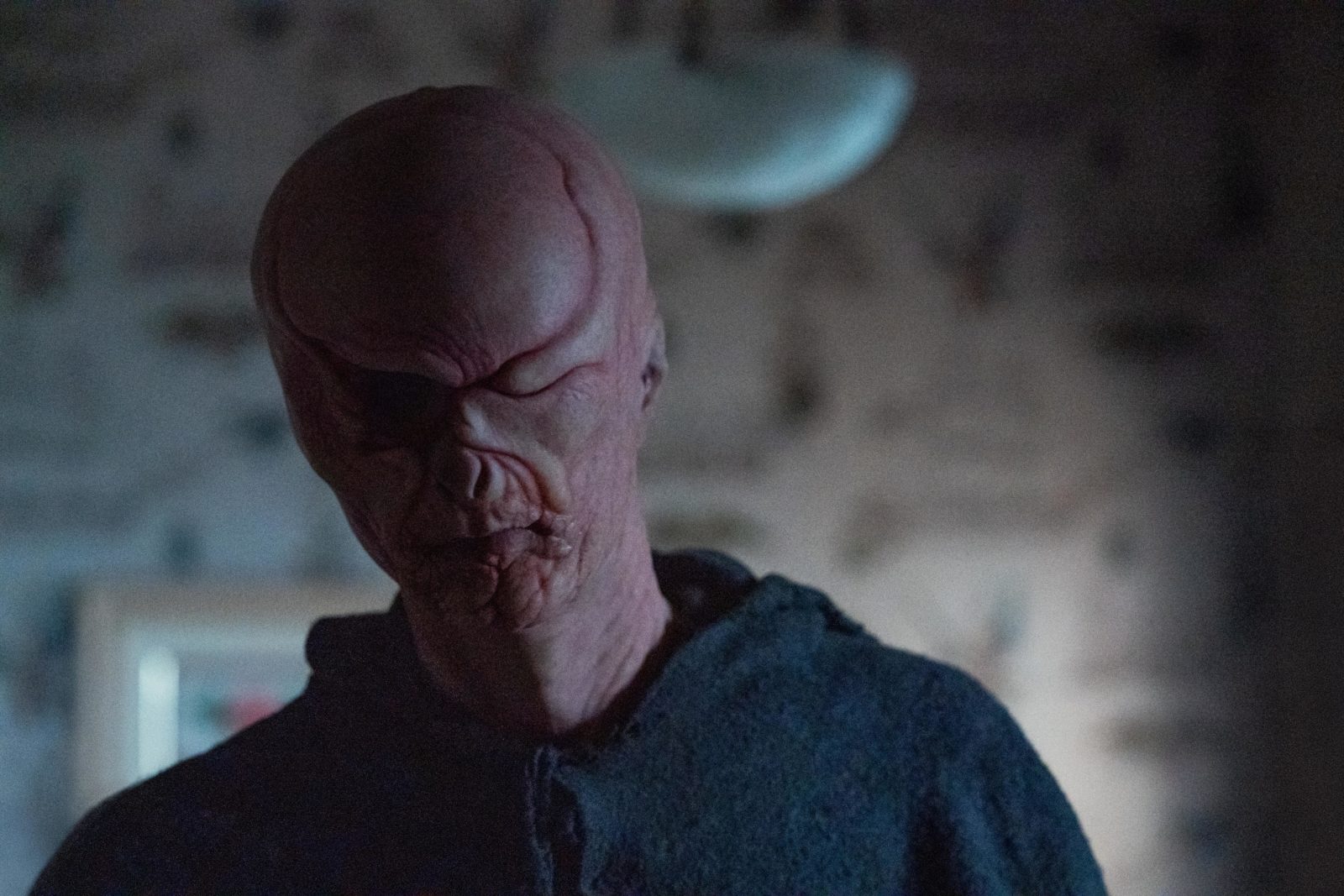 Victoria writes frantically in her notebook as we hear her voice stating that “she will be back tomorrow” and “it won’t be like the last time.” Around the house, pictures of the family shows Dad’s face has been scratched out. She’s struggling with the demon within. Young Daimon (Nolan Hupp) has made food for her and them, but Victoria flips out when Daimon states that Ana isn’t coming back. The visitors at the door are doctors from a behavioral hospital called to the house by Daimon. The scene repeats again and again. I am starting to feel itchy. And paranoid.

Daimon drives by the frat house where Dad attacked on his way to his office. Bryce (Zachary S. Williams), the college kid who was possessed by Magoth, pays Daimon a visit. He’s having a hard time coping with everything. He thinks he killed his frat brothers. Daimon assures Bryce that he did not kill anyone and thinks Bryce should talk to a doctor. Bryce wants nothing to do with that, then walks out. Ana is dealing with nightmares still. Daimon talks to Gabrielle about Bryce’s problem. She thinks that Daimon should be helping these people with how they feel after being exorcized, but Dr. Hastings usually does that so Gabby needs to get on it, too.

Speaking of Dr. Hastings, she visits Victoria who is getting worse. She’s gotten sick and is scratching the floor. The memory comes up again, but this time young Ana (Erica Tremblay) is at the door, not the doctors. Ana arrives at the ward and finds out that Victoria is in a coma. The siblings near her room and feel the presence of the skull. I hope they figure it out. Victoria is trying to get Ana to talk about how she got away from Dad. Young Ana claims that she hit Dad and ran, but young Daimon doesn’t believe her. Young Ana freaks out when she sees a figure outside the house. Dad is coming. Lights go out.

Caretaker arrives to join the siblings and Dr. Hastings to talk about Chris. Caretaker thinks that Keeper knows that Victoria is affected by Dad’s blood, hence this is why she’s possessed. Dr. Hastings shows the siblings where Victoria has been scratching. The two along with Caretaker go underground looking for Chris. Daimon thinks that the two of them can handle it together, but Caretaker reminds him that Ana would save Chris over Daimon and Daimon needs him. Bryce gets a visit from almost nun Gabriella. She convinces him to let her help.

I can’t tell if this is a memory or a dream that Victoria is having. Victoria tells young Ana about how lightning works but Daimon shuts that down quickly with the truth. A sinister knock at the door has everyone scared when suddenly the windows burst. Daimon disappears. Ana finds trash and half eaten mice when she hears something nearby. Young Ana confronts Victoria about letting Dad take her, and all she does is write in her diary. Victoria finally realizes that this Ana doesn’t exist; she never came home. The door slams behind her and just as Victoria is trying to open it, Ana changes to someone that Victoria knows. Jesus help me.

Bryce is a bundle of nerves as he talks to Gabrielle about his experience. He never saw the demon but felt another presence within him. It felt like waking up to the worst day over and over again. Sounds like what Victoria is going through. Gabrielle feels like she understands and promises that they won’t let it happen again. Kthara shows herself to Victoria in the last form she took when she was last alive. Kthara asks Victoria to work with her to keep her husband from getting in so that they can both get back to their children. If they let Victoria’s husband in, he may break both of them.

Daimon and Caretaker are on the search for Ana when Caretaker pitches the idea of Daimon handing Victoria over to the Blood. Victoria is struggling to keep her mind from being entered. As her health is affected, her husband is able to open the door to her memory. She and Kthara run. Ana finally finds Chris, who is at a near feral stage. He doesn’t want to be her errand boy anymore, but Ana does her best to convince him to give her the skull. Daimon tries to do things his way but another fight begins with the two as they try to save the people they care for. Ana finds out that Daimon can’t let Mom go because he committed her. Chris disappears.

Victoria is being affected by her memories but Kthara reminds her that it is all memories. Kthara needs Victoria to hide her, but Victoria realizes that it may not be her husband but someone Kthara is afraid of. Victoria is tired of allowing Kthara run things and allows the demon in so it can have Kthara. It’s not her husband; it is the Keeper there for Kthara. Victoria tries to make it out but is having heart problems. Chris has somehow made it out to the hospital. Daimon finds him before he enters Victoria’s room. Daimon does his best to destroy the skull, but Victoria wakes up and yells for him to stop. Thank goodness. I thought we almost lost one of the good guys.

The siblings and their mother talk outside, with the skull in her lap. Ana is not interested in it all, but Daimon is happy to have his mother. Inside Chris is committed as he struggles with withdraw from the skull. Daimon visits Gabrielle to talk about Bryce and he lets her know that he understand that those who are possessed do need their help and Victoria is back. Gabrielle shows Daimon the hotel where the possessed are being held, but upon arrival they find bloody bodies all about. Looks like Dad has found them.

Happy Victoria is back. Sad that Chris is going through a lot. I need Gabrielle to bring more to the table. She’s a liability. I wonder if Victoria will teach them all.