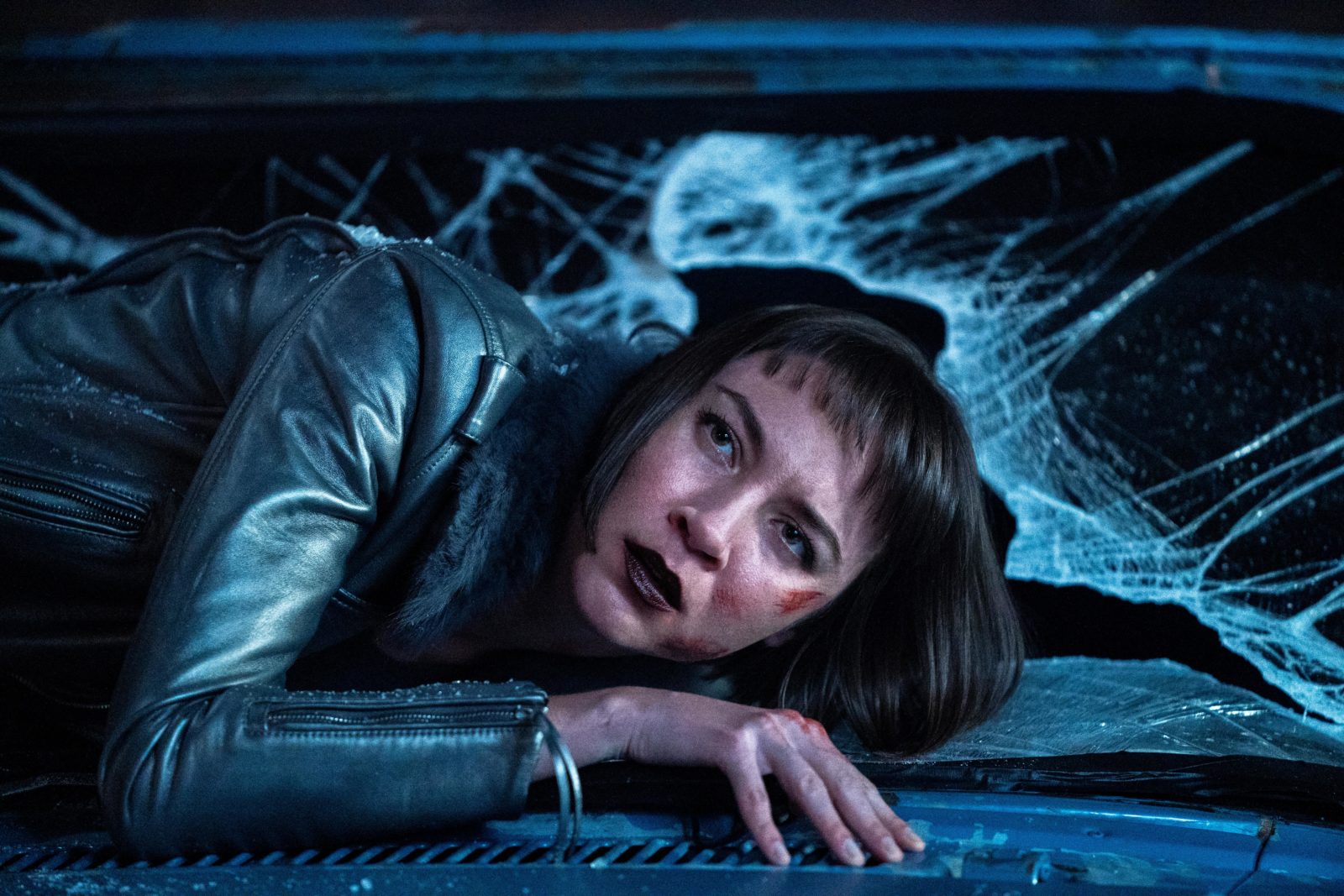 Kids are being ushered into a room and instructed to be quiet by a worried mother. She closes the door to talk to Keith. I thought the good nurse was dead since the crypt opening? Keith looks right through his wife, then bites her lower lip. He leaves to join the priest in a car while his kids watch. Seriously? I thought he was dead. Also, all the demonically possessed are out of a coma now, so what does that mean for the Blood?

Chris is back to his normal self. Ana is curious as to what Chris experienced, but he didn’t understand exactly what was going on. Apparently, the two go all the way back to the foster home. That makes sense. He brings up that back when she was younger she used to cry for her mom and that it is okay for her to want her mother. Ana can’t take the lecture and gets up to leave. Chris is scratching at the bandages on his arms, almost drawing blood. He thinks that he can leave and acts like he is fine, but she doesn’t believe that and pushes him back in. Chris yells for the skull. Poor baby.

Daimon and Gabrielle are busy taking boxes of documents out of the hotel. Daimon is not happy that Caretaker brought Gabrielle and that Dr. Hastings never told him. He is convinced that his dad is the reason behind this. Just as they are making their way out, there is someone at the end of the hall. Gabrielle wants to help the woman who is dying. She gives the woman her last rites before Daimon does his exorcism. Is Daimon becoming a believer?

Dr. Hastings and Ana talk about the new threat of an army that Daimon is busy trying to fix. She needs Ana to check on her mom while she makes her rounds. Ana and Victoria are quite the awkward small talkers. Ana wants to talk about things now. She questions if Victoria knew that their dad was a serial killer. Victoria did not see him as this serial killer; he was charming when they were together. It took time for her to realize that there was darkness within him but wasn’t sure. Ana questions why Victoria didn’t run. Her answer is that Dad didn’t reveal who he really was until he wanted her to see it. I’m assuming it is the night he kidnapped Ana.

Gabrielle is speeding back to the ward just in case Daimon’s dad makes his way there. He reveals that he doesn’t want to go back due to the guilt he feels about getting his mom committed. The two get a flat and are able to make it to a gas station that is able to help, but they have to wait. Daimon makes a quick call to Dr. Hastings to inform her what is going on. I’m concerned about this gas station. Keith somehow makes it into the security room and attacks the guard before he can hit that panic button. That’s exactly what we need, a demonic war.

Keith makes his way to Victoria’s room but she isn’t there. She’s out in the garden with Ana, who keeps her focus on talking about the past. Victoria explains that Dad saw Ana as his little protégé but forgot that she is half hers. It is a cute moment between the two women. Victoria wishes that Daimon had found a life like Ana did.

Speaking of Daimon, he suddenly notices that the cashier isn’t around. Outside, their car has been left alone but there is noise inside. Daimon goes to check it and instructs Ana to get inside the car. He finds the mechanic dead under a car and a patient from the hotel is there, waiting. Gabriella doesn’t listen at all and ends up getting snatched when she gets out the car. When will this child learn to listen? Luckily, Daimon saves her before she is cut up. I like the way he makes bodies burn from within.

Ana is having moments of memories and decides to tell Victoria about what is going on with Dad and the possessed. Victoria must hold onto the skull no matter what happens. So much growth for Ana. Dr. Hastings finds the dead guard and prepares for whatever is to come. She informs another guard that they have a code yellow and to lock down the ward. Ana wants to give Victoria a fighting chance (aww) but soon they find out that they are locked in the facility from the outside. Then the lights go out. A fight is coming, people. I wonder who is going to make it out alive.

Indoors, Keith, the priest, and another are possessing people. Daimon warns Ana but finds out that the demons are already here. Patients are freaking out. In Dr. Hastings’s office is a newly possessed Dr. Lawrence (Jan Bos) who snatches the Keeper out of Victoria’s arms then flees. Ana wants to search for it, but Hastings reminds her that she nearly died the last time she went toe to toe with Dad. The patients are let loose, including one Chris, who finds a weapon.

Daimon finally arrives with Gabriella, who insists that she’s not staying in the car again. If she had stayed in the car, she wouldn’t have gotten herself snatched! Anyways, Ana and Dr. Hastings go on a search for the skull. Dr. Hastings apologizes for not taking Ana in, claiming she didn’t feel strong enough to handle what Ana was capable of. Ana instructs her not get herself killed. The two women are attacked by the priest and another patient, during which Ana holds her own by knocking the two out.

Victoria is hiding when she notices on a security monitor, in Dr. Hastings’s office, a patient who walks up to the door, looks into the camera, then walks away. I have no clue why she stands up to look at the door because she is nearly attacked by the patient. Daimon is getting good at saving everyone just in the nick of time. He asks where the Keeper is. Cut to Dr. Lawrence talking to the skull when he is attacked by Chris holding an axe. Ana finds Chris with the skull, claiming that he got it for her. However when she reaches for it, he doesn’t hand it over. Ana tells Chris that he was right about her missing Victoria. This shared moment is what he needs to hand it over. They all meet find Daimon, Victoria, and Gabriella. The two siblings talk about what their next plan is when Victoria interrupts them. She wants to choose her future. She tells the Ana she wishes Dad took her instead and thanks Daimon for being there for her. If he hadn’t committed her, she would’ve died years ago.

Cut the sweet moment short because the nearby damn elevator is opening. It’s just a distraction as Keith makes a hell of an entrance from behind, taking everyone out and swiftly snatching Victoria then taking her down the elevator. Ana and Daimon take the stairs with the Keeper in stow. Am I to believe that Dad is in Keith’s body?

The body can’t contain whoever is within. Dad/Keith easily takes out Ana; the Keeper slips out the bag and tumbles underneath a car. Daimon attempts to take on Dad alone, but it is not looking pretty. Victoria desperately tries to reach the Keeper. Keith/Dad opens up his ribcage, giving us a view of the teeth and mouth that devours people, when Victoria finally gets the skull. Ana shoves the skull into this mouth. Daimon stands up and uses his powers to make a fiery flame that ruptures the body in half. It is glorious.

What life is left, Ana speaks to, informing him that she will never be like him. Just when she walks away, Dad grabs her, which makes her see things. I don’t know what Ana is seeing but Dad is actually chuckling over it.

Victoria is no longer there; she is in the back of a truck but Mother has her reins on her. Damn. Mother takes the body of Dad into the car and tells the kids that she hopes they have said their farewells. The back of the truck closes then it is driven off by a priest. Daimon thinks that they will be able to find her again and that Dad won’t be able to come back from what just happened. Ana doesn’t think that’s true because the body that was burned up wasn’t dad.

The HELL?? Baby!!! I am confused as to who possessed who! Did the siblings unleash Dad into Victoria, or was Victoria always possessed by him? When I say that I watched the scene multiple times just to get it, I am not lying. It would explain why the Keeper wanted to be near Victoria this whole time. What have we done here? I’m at the edge of my seat.