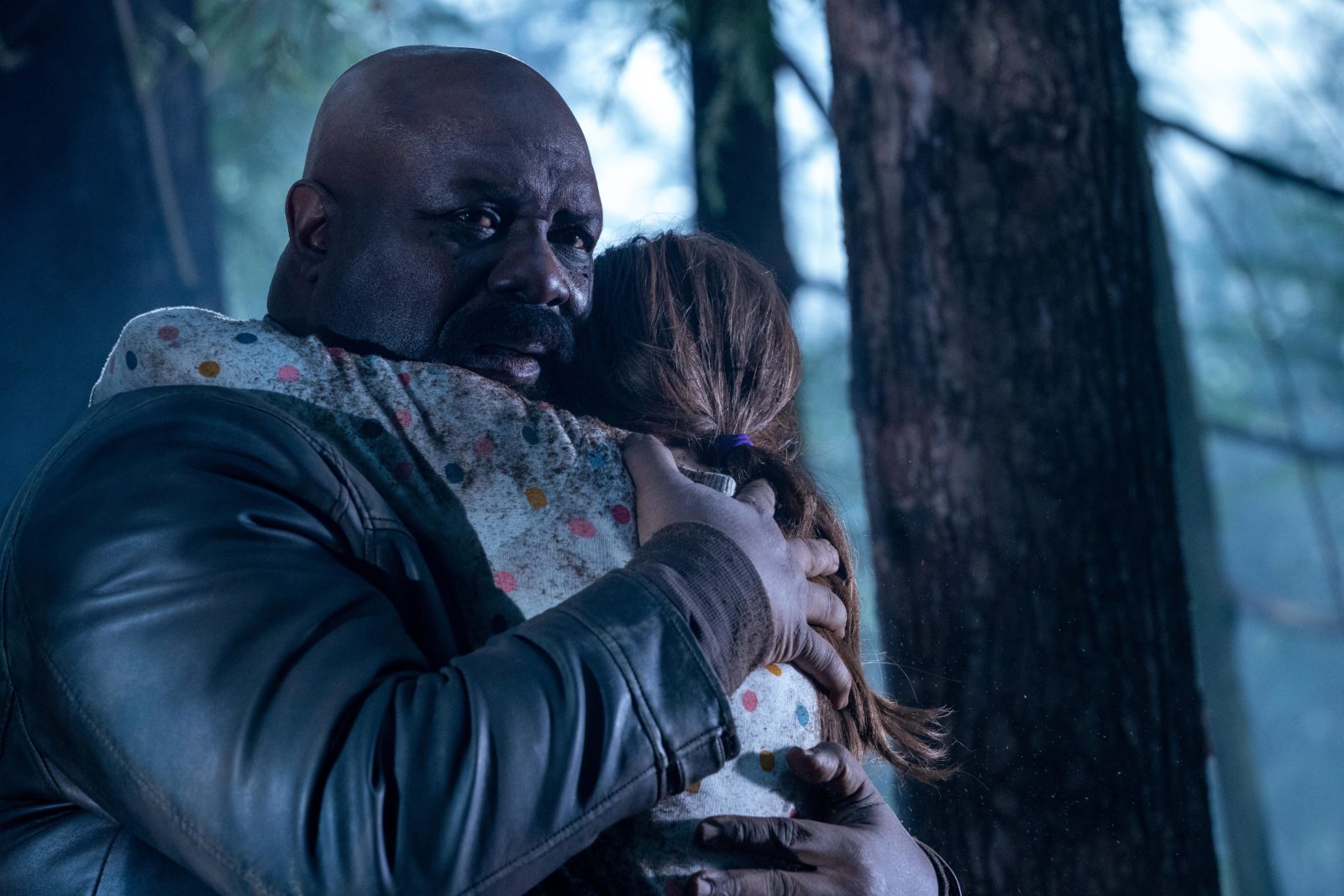 Twenty years ago, young Ana is in a room alone while outside Caretaker and nun Louise Hastings are discussing what they should about the child. Ana has an ability that makes people faint and feel like they are dying just from a touch. Caretaker suggests that they keep the children apart because they might become like their father. Louise asks Caretaker to take Ana, but she is in the system already so he will check on her while Louise take care of the boy. Young Ana stares at the two way mirror that clearly she can’t see through but she shatters it, scaring Louise.

The ward is fixing up from the attack. Daimon and Ana argue about what happened. He is upset that they lost Mom and that he believed Ana that the guy was Dad. Gabriella and Dr. Hastings have a quick chat outside. Just when Gabriella is about to go in, she hears banging from a nearby car. She opens to find Keith’s wife in the trunk. Another point for jump scares. The siblings are playing the blame game. Ana doesn’t think Victoria was ever around, and Daimon was affected by the hope of resurrecting her. Dr. Hastings tries to calm the two but Ana wants her out of their family business. Daimon considers Dr. Hastings family. Ana decides to quit on her brother and leaves, but not without taking Chris along with her. I do hope Chris is doing better.

Somewhere on a dock, the priest arrives to a nasty looking boat by the name of Garibaldi, with a bag full of drugs. Mother mentions that the priest should have brought the body for Basar. The priest speaks his mind about leaving Basar (the half body left of Keith), which doesn’t go well because Basar is her oldest son. Mother insists on caring for her son. The priest mentions that Basar won’t be able to mark another. Something happened apparently. I think I’m understanding this. Mother sent Keith out to unleash her son Basar. She really played everyone.

Dr. Hastings is fixing up the lip of Keith’s wife Jolene (Samantha Sloyan) while Gabriella and Daimon talk about her. It would seem that Jolene has been marked to be the next for host for Kthara. I guess Victoria let them in on who is possessing her. They inform Dr. Hastings that they still can’t reach Henry aka Caretaker, and Daimon wants to talk to one of the patients from the hotel. He’s not interested in what Caretaker is doing. Caretaker is tied up in his own van. He finds out that his allegiance is being questioned and there was a slaughter at the hotel. The van stops and Caretaker finds himself “home.”

Daimon can’t sleep. He doesn’t have a half bad shirtless body. He sees a shadow in his home, which leads him to find a wheelchair in his living room. The closer he gets to it, it moves back. A decaying Victoria appears behind him telling him that he can’t hide who he is anymore and should let it out. Mother’s voice comes out. Gabriella wakes him up; he’s in a bed at the ward. Daimon wants to talk to the possessed man from the hotel. The man explains that Daimon is a traitor because he has the blood of a demon, but that can change if he joins them. Also, all demons want is their freedom, but only Mother can give it to them. Then the man turns his head 180 degrees and dies. That is true allegiance right there.

Dr. Hastings is on the search for Caretaker.  She visits the Archbishop Terrazi (Tom Everett) who may have contact with the Blood. He acts like he doesn’t know what she is talking about despite the fact that she knows Gabriella’s notes mention the group. Archbishop reminds her that he once warned her about Daimon. Dr. Hastings makes a plea by stating that there is a monster out there. He concedes on making the call then tells her to warn Gabriella about leaving the position because the Church can’t guarantee her safety. Yeah, okay.

Ana is lost within her memories when Chris interrupts her thoughts. She’s there to work but Chris only came for his charger. He needs a break from work plus his boyfriend, Derrick, didn’t believe the lie Ana told him. Ana doesn’t care about Derrick at all and nearly bites Chris’s head off, but Chris is not in the mood to deal with that mess. He tells her to go back to Portland and deal with her brother or find a way to handle her anger. Ana concedes and asks him to help her work. Not the appraisal work. The murdering type. Caretaker is tied up in his home as Esther (Deborah Van Valkenburgh) informs him on what he missed out on. She also tells us a bit about his past. The house is his family’s home that he kept, even though they were killed during a time when he rebelled against the family business. Esther wants to find the demons, so she needs a knife owned by a him that once attacked Caretaker. Only way she can find it is by cutting him because Caretaker’s scar will react to it. I mean, I guess.

Chris brings in a client but not the right one, which upset Ana. See, Chris wants a break from killing people for a little bit because Ana is basically doing this just because she messed up finding her dad. He reminds her why they do what they do, which is not to scratch an itch. Ana moves an item with her powers but Chris does not care about her little tantrums. He is in control now. Good for him!

Daimon is taking a walk when he sees a box that reminds him of Ana. He is just about to text her when Esther calls from Caretaker’s phone. Daimon isn’t interested in helping the Blood search and kill Victoria, but then Esther brings up the deal that Caretaker and Dr. Hastings made in regards to splitting up the siblings. She mentions that since those two work with the Blood, the group always looked away when it came to the siblings. She’s under the impression that Daimon knew so therefore he owed them, but he doesn’t know a thing.

Derrick and Chris are eating sushi as well as talking over their relationship. Ana comes in, snappy and moody, inquiring on how long the lunch will take. Derrick doesn’t appreciate how she speaks to Chris and suggests that she does an activity to work off the stress. As she walks away, Chris looks concerned. She gonna mess up in a big way.

Caretaker is still getting cut up when Esther walks in. He is adamant that Ana is innocent and different from the demons that they hunt; however, Esther doesn’t agree. She finds the knife that will be able to kill the demons. She has Caretaker untied.

Daimon confronts Dr. Hastings about the deal she made. She recalls that she thought Ana would be problematic because of the road trip that Ana had with her serial killer dad. Along with the fact that no one could get through Ana, her charts showed that she had all the psychological factors that could lead her to violence. Daimon was just improving and Dr. Hastings didn’t want to jeopardize that.

Daimon asks if Dr. Hastings would rob him of being with his sister and possibly getting a better life. Answer: She was and is still scared of Ana. I don’t blame her since Ana is busying herself with finding her next victim. Apparently, she is accessing Derrick’s police database, and he arrives to question how he is logged in there and at home. Derrick also knows that Edward Tate’s file has been accessed and he must report unlawful logins. He will do what he has to. As he leaves, Ana looks at him upset. Don’t kill him, girl. You will lose your best friend.

At home, Daimon is taking a much needed drink when he gets a surprise visit from Gabriella. He’s not in the mood but lets her in. She brings up that Dr. Hastings seemed upset about something but Daimon doesn’t  tell her what he knows. Gabriella tells Daimon that her parents once thought she was possessed because she was sick. Turns out she is epileptic. Her story is about forgiving people for reacting out of love and faith. She thinks he should forgive himself and Ana. He’s not ready to. Gabriella changes the subject to finding his mother. Daimon doesn’t think the two of them alone can do it. He reaches out to Esther who is happy to get the call. I don’t trust her.

Ana is lurking around the police station when she follows Derrick. He catches her as she gets closer. Ana gives him a somewhat believable story about how she was screening potential clients because the last one was a criminal. She apologizes and asks if they can hug it out, stating that she cares about Chris and didn’t mean to take it that far. She almost had me going. As she literally hugs the life out of Derrick, Ana remembers a time when her dad gave her knife to hurt someone when she was younger. She instead put it into Dad and runs off. Ana lets go of Derrick before he dies and leaves. Her eyes are full of fear and concern of her wellbeing. Maybe she is turning into Dad.

Basar gives Mother a message that there is another. Another what exactly? Ana comes back to the business with determination. Memories of when Dad buried her alive after she ran away pop up.  She was found by Caretaker. Chris checks up on when she is on the floor crying about almost killing someone like Dad wanted to. He reassures her that she is not like Dad. At this point Ana realizes that her family needs her. Chris comforts her. I guess the ice has melted.

Gabriella and Daimon reach the meeting spot with the Bloods. Neither one of them are sure about the situation. Esther has three of her men “check” Daimon for weapons. Daimon stops one from attacking him with the knife that Dad cut him with as a child. His spidey senses are on point. The other shoots him, but Daimon is so strong he unleashes his full power, causing two of them to burn while his scar burns his shirt. Esther drives off scared while the one with the knife runs off as he drops the knife. Gabby looks scared, too.

This episode dug more into the past. I’m not mad. I just want to know who the “other” Mother is interested in, and full-powered Daimon isn’t so bad. The Blood may think otherwise. Where is Caretaker?