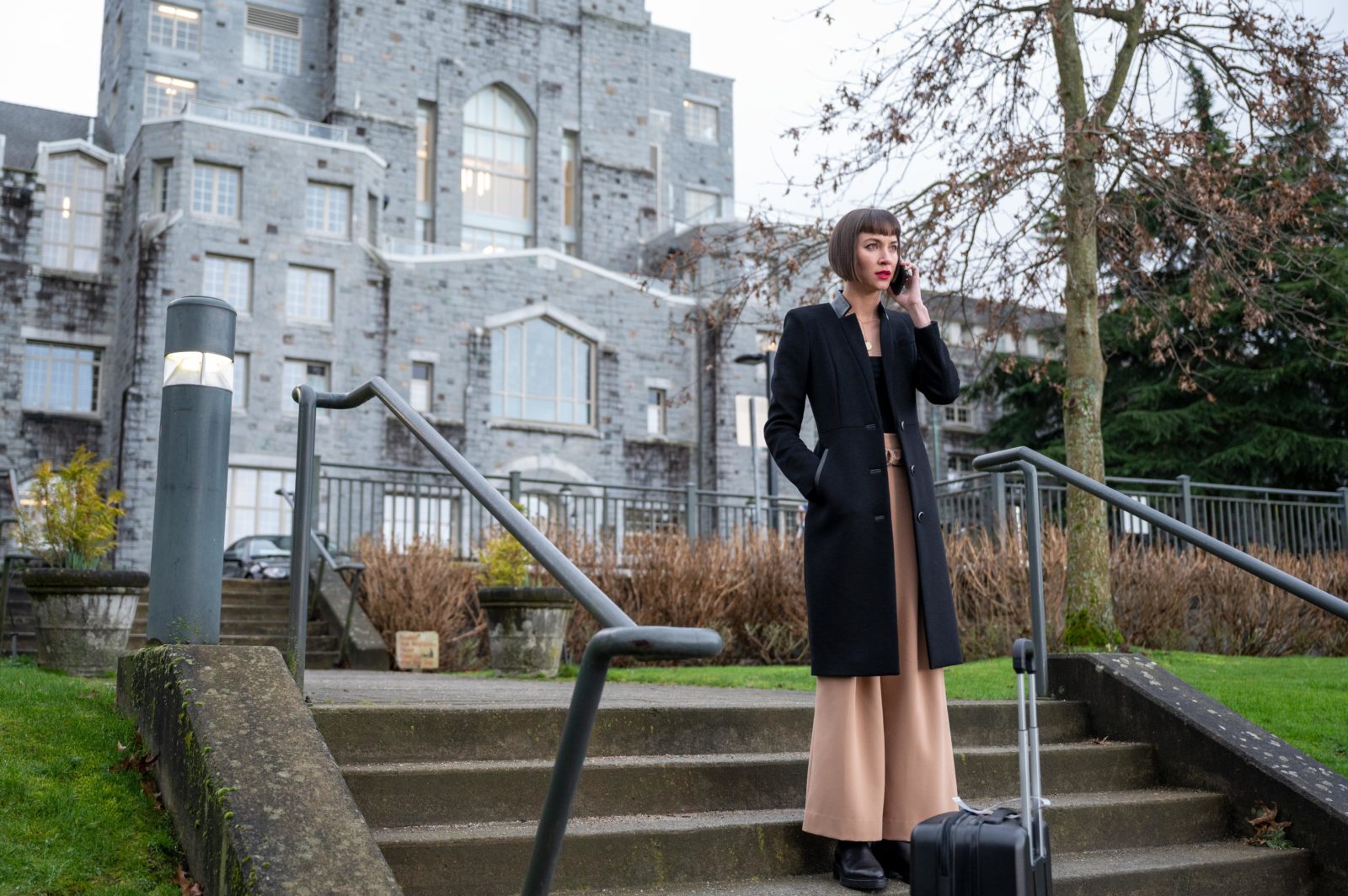 Daimon and Gabriella arrive at his house while he is frantically calling Ana to warn her about the Blood. Gabriella wants to take him to the hospital but he ain’t having it, so she insists on seeing his wound. For her, she thinks he acted out of self-defense but he is doubtful. The man also can feel the presence of the knife in her pocket. He explains that Dad used it to cause the scar on his chest. It feels full of evil like his dad. Gabriella thinks that they should get rid of it. He agrees and tells her that there is another.

In the boat, Mother sings to her son when the priest arrives empty handed. It doesn’t matter; another is coming to assist her in a way she needs. She mercy kills Basar and instructs the priest to find them both. Dr. Hastings is surprised to find Gabriella in her office leaving the knife. Hastings tells Gabriella how she talked to the Archbishop who may have had his hand in the attack. Of course, she tells Daimon. Ana finally calls  Daimon to apologize, but Daimon tells her that he thinks she was right. I can’t even remember what the fight was about at this point. So much has happened.

Anyways, Ana is just arriving at the ward but Daimon is on the way to their childhood home. He wants to look for the other piece of the knife that he hid. He thinks they can use the knife on Mother even if it means losing Victoria. Ana questions him on why he is going back for the other piece. She goes to Dr. Hastings’s office and demands to see it. Immediately it affects Ana, who warns Hastings about being near it. The good doctor thinks that is all superstitious, but she coughs up blood in the middle of her sentence so…

Esther and the Blood are busy are busy preparing for something. She has Finn (David Meunier) locked up in a cage because he was the last one marked. He could be Mother’s new host. Finn doesn’t want to deal with Mrs. Helstrom even if he made an oath to fight demons in remembrance of his son. No way does he want to be a host. They get notification of where Daimon is. Dr. Hastings informs Ana about her lung cancer but doesn’t want Daimon to know. The only other person who knows is Caretaker, whom Dr. Hastings mentions was torn between his duty and taking care of Ana. Where is the old man anyways?

I’m getting real tired of Gabriella. As the two arrive at the threshold of Daimon’s childhood home, she comments on how quiet and beautiful the house is. Child, this is not the time to be charming and optimistic! Daimon pointed out that Dad didn’t want neighbors with prying eyes. She’s already to walk up to the door to talk to the new owners, but Daimon reminds her that Mother could have minions on the property. Ms. Optimistic thinks a family could be there. Someone opens the front door and comes out with a sign for an open house. This could work.

Finn gets out of his cage. Looks like Magoth got a new body and takes two lives in the process. Daimon and Gabriella pose as a couple looking for a house. He inquires about anything strange about the house but the real estate agent (Christine Horn) dodges the questions like a pro. One other looks suspicious…

Magoth arrives at Mother’s new home. Mother is pleased to see him and instructs him to go to the house while the priest/Raum delivers a message and sets up a trap. I wonder who these bodies are. Ana is chilling in Victoria’s old room, feeling the energy within, when Dr. Hastings arrives with a message from the priest: an old possessed woman is chilling at the docks. The two figure that it is a trap for Daimon. Ana thinks that they won’t be expecting her to arrive with a knife to kill Mother. Dr. Hastings is unsure about it. Ana asks for a favor. Gabriella and Daimon notice that more Blood members are arriving, looking for what they are looking for, but they don’t know where it is hidden. He sets them on a chase to a nearby barn and plans to wait everyone out. I’m concerned about the agent’s life here.

Ana can’t touch the knife because she would feel all the pain of his victims, which she can’t handle it. She needs Dr. Hastings to kill Mother. The doctor initially, vehemently, refuses to do this. Ana uses Daimon as a card. He can’t be the one to kill Mother; it will affect him terribly. Dr. Hastings agrees. The Blood members seem to be leaving, giving up on the knife. Daimon realizes that all his memories weren’t all bad until that day. She thinks he is in danger, but he reminds her that he is gifted like Dad but that doesn’t mean he is like his father. His scar is a reminder of whose child he is. Daimon isn’t concerned about the Bloods at all.

In the barn, Daimon digs up the knife. Memories of boys teasing him pop up. He handled them back then. Just as he finds the knife, the Blood show up around him with weapons. They all attack at once and place a talisman on his head, thinking that will subdue him. One of the Bloods opens up the box to find a toy. Good diversion. He knocks them all out.

Dr. Hastings and Ana arrive at the dock, confusing Mother and the priest. Wielding the knife, the two of them attempt to attack Mother, but she is still powerful. Instead, she gets Dr. Hastings to stab Ana. It looks hella painful. Daimon has the Blood members on top of makeshift execution positions. A group hanging. Gabriella is concerned, but I really don’t blame him at this point. Hastings takes out the knife after Mother explains that the suffering Ana feels would be what Victoria will experience for eternity. Mother allows Victoria to come out for a moment. Ana has a moment of weakness and refuses to use the knife, but instead suffocates Victoria so she won’t suffer.

Gabrielle can’t stand how dark Daimon has gone. One by one he removes the barrels and haystacks but doesn’t allow the people to hang. He is doing this to bring Esther out. Dr. Hastings tries to convince Ana that suffocating Victoria won’t help because Mother will find another body and Victoria probably won’t be able to survive being brought back. Ana doesn’t listen either. Esther states she doesn’t care if Daimon kills her and her people; it will prove that Daimon and his kind are evil. He lets them slip a little, and we see that Esther does care about their lives. Gabriella is freaking out and pulls a shovel to threaten Daimon with. The girl really forgot that he got people’s lives dangling by his mere powers and they could die if he lets go. Daimon reminds Esther that he is human too, unlike his father. He lets them go and tells them that he forgives them for everything they have done and their prejudice towards his family. To him, the war is over.

Victoria seems to have come back after Ana freaks out a little. Daimon breaks into the house to grab the knife piece out of the fireplace. He remembers when he was young, crying to nun Louise Hastings about being a monster. The two talk over drinks at his place. He couldn’t tell her the plan because she wouldn’t have gone through it. He wants to forget about the day except the part where she said they were living in sin. They flirt a bit. He wonders what the Vatican would say about her, a nun, swearing and drinking with a demon. She reminds him that she is not a nun yet and he is not a demon. Longing looks are interrupted by a call from Ana who claims that Mother is gone and Victoria is free. Daimon wants to come be by Victoria’s side but Ana tells him that she’s got it. Dr. Hastings talks to the other doctor in the room about rethinking her treatment choices. I’ll admit that I am side eyeing the good doctor.

Daimon is in shock as he tells Gabriella the good news. Gabriella comes in with the positivity on all he has done and is free from the hold Mother has had. The two hug then share a kiss. Since she hasn’t taken her vows yet, it shouldn’t affect the feeling. He runs to take a quick shower, leaving her to take a moment. Gabriella is untying her hair when she hears a noise outside. Someone walks around the building unnoticed and drops something through his mail slot. Daimon doesn’t hear it.

Gabriella feels a pain on her head then turns to a mirror to find that she was marked by Basar back when he attacked them at the ward. Inflicted, she falls, but when she gets up she doesn’t look scared anymore. That is one creepy smile when she picks up something.

Daimon hears a door open and is surprised to find Gabriella. He also knows that there is something in the house. Gabriella comes on to him. He does his best to combat the demon, but Mother makes herself known. Daimon is powerless against her in her new body. She takes the piece of Basar she pulled out of the body before and puts it into Daimon. Mother/Gabriella states that there is one more sacrifice left. The last image we get is of the two of them in bed. Gabriella is on top.

I could possibly be wrong about it being Basar. It could be another. I honestly have no words.