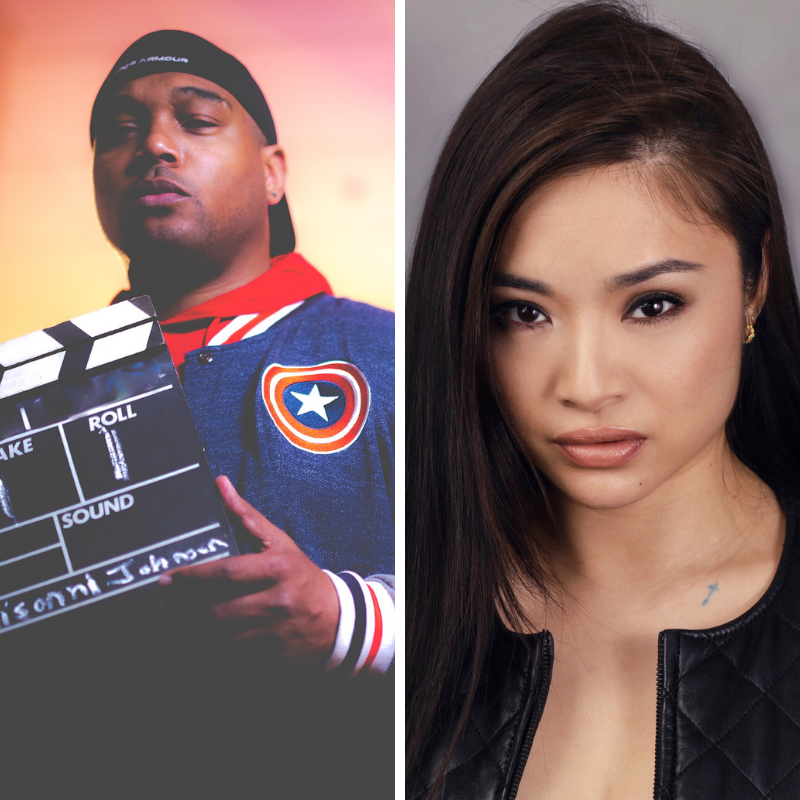 Take Out Girl will be released for all to see digitally on May 18th. It is an award-winning independent film co-written by Hisonni Johnson and Hedy Wong, who also plays the leading character, Tera. After witnessing her mother Wavy (Lynna Yee) struggling with her restaurant business along with medical bills due to a back injury, she makes a deal with a local drug kingpin, Lalo (Louie Ski Carr), to deliver his product by using her invisibility as a Chinese woman delivering take out food to customers from her mother’s restaurant. You can watch the trailer here.

BGN had the amazing opportunity to interview the director of the film (and long-time fan of BGN) Hisonni Johnson along with co-writer and star Hedy Wong.

Note: This interview contains SPOILERS and has been edited for time and clarity.

I know that the film is inspired by true events. What are those true events and what inspired you two to bring them to life?

Wong: Take Out Girl is a combination of my Bay Area family background and my LA life. When I met Hisonni, we just started to rewrite, take stuff out, centralizing it on the family.

Johnson: After a few months of working with Hedy, I realized there was a huge part of her that wanted to dedicate this film to her mother. My mother’s name is tattooed to my hand. Deep down inside Take Out Girl is about one’s deep love for their mother.

Wong: It was more of my indirect way of saying I was sorry that I wasn’t the daughter that she wanted me to be. But now that the movie’s out with Hisonni she’s all, “I’m so proud of you!”

I really resonated with seeing a mother’s physical and emotional labor and the intergenerational struggle both Wavy and Tera face with Lalo, including at the end of the film. What was the writing process like for this resonance?

Wong: In the original script, Lalo was not Tera’s father. I based him on my dad. My dad’s street name was Chico. He was an ex-triad member from Hong Kong. I told Hisonni where the Lalo character came from, and he was like, “What if Lalo is your father?” That’s a jump I would never make by myself!

In the original script, I was the one who had to tell my mother what happened to my brother [getting shot by Lalo]. [Then Hisonni had an idea]; he was scared I was gonna freak out. He thought maybe Tera would shoot back, catch a bullet, and it would be Nate [Tera’s friend played by Dijon Talton] who would tell my mother.

For me it seemed so perfect because Hisonni made Tera a more proactive character. So I can imagine her to the point of anger. To me, what he proposed to me was not far-fetched at all. I have family members who [have had] heat of the moment sh** change their lives.

Johnson: A mother and her child, their relationship is forged from pain. Metaphorically throughout Take Out Girl, you see that pain. My mother had a back injury [like Wavy]. I almost had to drop out of school at thirteen to take care of her.

Writing a character who would die not only for her mother, but for her family, is really cool. I’m only scratching the surface of the type of stories I’d like to tell about women.

The fact that y’all wrote this years ago, and how the message is still consistent today, it’s incredible. It’s coming out during a time of violence against Black people and Asian women.

Johnson: With everything that’s going on in America, the Black Lives Matter movement and the Stop Asian Hate movement, we’re sitting here like, “What the hell is going on out there?” [Our film] is clearly how [Black people and Asian people] are not different from one another.

This is an Asian American female’s story where her biggest enemy is poverty. It’s a monster that’s still chasing me [as well]. Every day I’m terrified I’m gonna end up back in my neighborhood Milwaukee, the most segregated city in America, struggling to eat and watching my mom suffer. The enemy [is] the societal issues keeping us in positions that lack comfort. We’re not the problem, but we are the answer.

It’s very mesmerizing how well you two work together because there’s a wide range of how Black men and Asian women are written in this film. I would love to know more about the writing process in regards to displaying this.

Wong: Asians in history are either known to be the “yellow peril,” or we’re invisible. I told Hisonni that [Tera’s] insignificance is what’s going to turn her business into lemonade.

That made Hisonni say, “[Tera’s] hat is like Superman’s cape!” I was taking a disadvantage in reality and turning it into an advantage in a small niche world of criminality.

Johnson: Our general rule for writing is this: no monoliths.

Hedy and I designed the opening scene to be a smart Asian girl leaving school. Also, her being the hustler [getting paid for helping white students with their homework], but people barely noticing it.

Wong: I’m also excited talking about different monoliths and categories that Asians get put in. After Crazy Rich Asians came out, of course I was happy! This was the first major Asian movie on screen since The Joy Luck Club in the 1990s. But I noticed that after that movie came out, HBO’s House of Ho and Netflix’s Bling Empire [are each] a Crazy Rich Asians reality TV show.

I like representation. But the problem is there’s such little representation with Asians if this is our representation now, “All Asians are rich!” Growing up, my dad was a refugee. I grew up with immigrants who came from war-torn countries. I’m hoping Take Out Girl will add texture to the Asian American narrative because growing up, I saw a lot of Asians I couldn’t relate to in film.

What are both of your hopes for Take Out Girl’s future?

Johnson: It is my duty to tell the story of African Americans. But it is my honor to tell the story of any underrepresented group. We need to make it okay to tell each other’s stories. The type of people who are going to do the research and really dig deep to connect with someone else, and then have a big voice about it, those are the people who are really going to make change contagious.

Wong: We survived so much to get to this point. There were many struggles I have seen Hisonni as a Black man go through in this industry. And I’m rooting for him.  I see the support from all communities. It makes this movie more special. Other hands are coming in saying, “We got you too.”