Long before I was old enough to understand what she meant, I was jamming to India.Aire’s ‘I Am Not My Hair.” The song’s lyrics were completely lost on me— I had not yet come to understand the gravity of the pressures placed on my hair. But now that I’m an adult, I see that the song, despite being a bit old according to some, carries a great deal of depth that is still applicable today.

During an interview, Chimamanda Ngozi Adichie unabashedly said, “Black women’s hair is political.” I do not think her interviewer understood the layers of truth wrapped in her statement. I don’t think there is anyone who understands the black woman’s daily plight with her hair save for the black woman herself.

I’d had a perm throughout my childhood and thought nothing of it. I often wore those gross chemical burns with a somewhat warped sense of pride, almost as if they served as a testament to the lengths I would go to look, ‘beautiful’. But by whose standards was this beautiful?

I was not taught how to care for my hair in its natural state (heck, growing up, I hardly ever even saw natural hair on a woman for that matter) so when I got my big chop while I was in college all manner of disaster and hilarity erupted. I was laughed at by both my male and female relatives alike, each offering their own set of snide ‘advice’ which was all negative and intended only to spur regret in me concerning my decision. And regret it I did. Their subtle barrage of ridicule alone was enough to make me question why I’d done what I’d done in the first place.

After I went natural, I had a friend praise me for my effort. She too was natural and served as my support system through the journey. She was disgusted by the system which has seen fit to deem black hair in its natural state as an abomination and told me a little story about how one of her friends had outright laughed at her when she told them that she was going to go a job interview with her hair in a twist out. The friend strongly advised against it and probably thought they were doing her a favor. While this person’s behavior is unnerving, I’ve looked back on every job interview I’ve ever gone to and realized that I’d subconsciously been following that same rule. 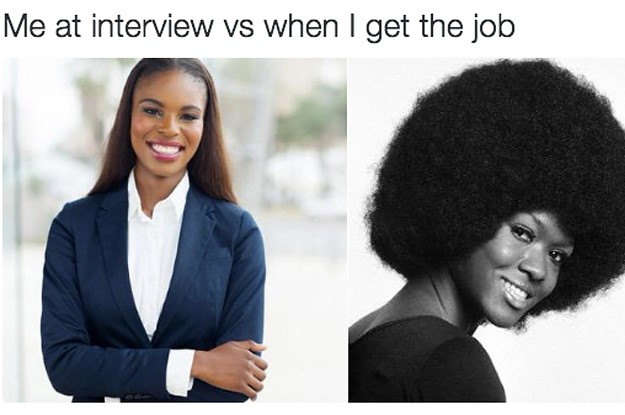 The unfortunate thing about this hair issue is that it’s a daily struggle—even if I am able to come to terms with the way I look, I still have other people’s judgements to worry about. Nakeya Brown did an excellent photograph series trying to capture this struggle and the burden it carries. Of all the things I’ve encountered as a black woman, nothing is more exhausting than hair. It’s so much easier for me to be labeled unkempt if my hair is a certain way (i.e. in an afro) so I have to be careful at all times. Most times I don’t even want to have to deal with it that I just hide my hair in box braids or under installs and I feel very embarrassed that I see my hair as a nuisance!

It’s even more of a challenge when you encounter other black women who also feel ashamed of their hair. I once overheard a black woman exclaim, “I’m too busy to do this hair!” Why is there seemingly just this innate thought that black hair is tiring, is too much, too demanding? And it’s even worse when you realize how fandom portrays black characters and their hair.

I’m tired of being ‘fixed’ and honestly wish that people would just get over themselves with their presumptions about black women and their hair! And stop wearing those darn afro wigs and thinking they makes you look ‘fierce’—you look ridiculous and insensitive.