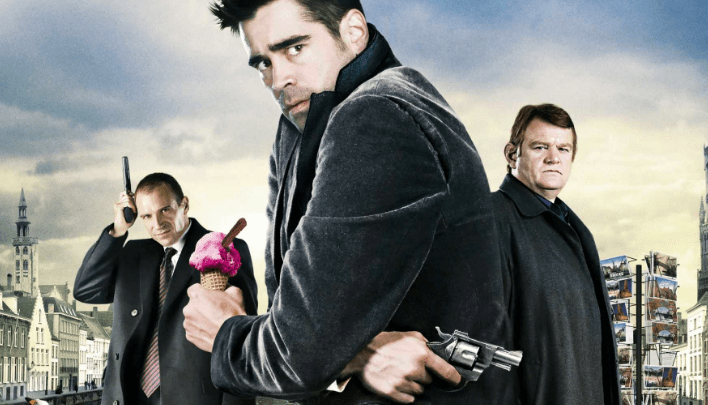 Ray (Colin Farrell) is a novice hitman who mucks up his first job to assassinate a religious leader by also accidentally killing a praying altar boy in Martin McDonagh’s 2008 neo-gothic dark comedy thriller In Bruges. Traumatized by the incident, Ray and his mentor Ken (Brendan Gleeson) are sent from Dublin to Bruges, Belgium—an exile as they await orders from the head honcho Harry (Ralph Fiennes) while he does damage control around Ray’s screw-up. Bruges is Belgium’s best preserved medieval city, with fairy-tale canals breaking up the labyrinthine town into enchanting neighborhoods and fascinating history, a strange backdrop indeed for two hitmen on the run. But, the plot thickens when Harry tells Ken his next hit will be Ray, and that Harry chose their banishment site so that Ray would have the opportunity to see something extraordinarily beautiful before he dies.

The problem is, hotheaded Ray hates Bruges with the passion of a young man who would rather be pub and bed-hopping than exploring Bruges’s gothic tales and architectural wonders. That is, until Ray meets a beautiful local Chloe (Clemence Poesy) who is working on a movie in town — an homage to Nicholas Roeg’s haunting Venice tale Don’t Look Now — and also becomes mildly obsessed with Jimmy (Jordan Prentice), a star in the film who happens to be a little person. It’s not long before Ray’s shenanigans lead to him shooting Chloe’s boyfriend in the eye with prop gun (blinding him), stealing Chloe’s stash of dealer drugs, and also managing to get into a fistfight with a random stranger and his wife. All the while, Ray is meant to be staying put in the adorable, canalside bed and breakfast, waiting for Harry’s calls. Instead, it’s Ken holding down the fort against Harry’s rage, as Ken prepares to kill the young man he brought into the mobster fold.

This is a tale of self-isolation from the ground up. Bruges itself maintains its particular look through the fact that it’s tucked away in Belgium, and many folks, myself included, hadn’t even heard of it until this movie came out. Because of this, the city isn’t as overrun with tourists as other medieval cities like Prague or Budapest. But Bruges’s self-isolation is one of the only healthy features in this bunch.

Ray’s self-isolation goes awry as his post-traumatic stress over killing the little boy eats him up so thoroughly from the inside that he cannot sit still. Where he’s supposed to be laying low, he’s causing huge scenes everywhere he goes. He even gets picked up by local police after Ken puts his entire life on the line to save Ray’s future. Ray is exactly how you don’t self-isolate.

However, in In Bruges, it’s not just the hitmen’s self-isolation gone wrong. Jimmy, the little person who garners an unhealthy amount of Ray’s emotional attention, goes off on a cocaine-fueled rant about the impending race wars that he believes will pit all white people against all “Blacks.” And when he says “Blacks,” he means all people of color in general. It’s a stunning moment that a man with a physical disability like dwarfism, a marginalized identity in and of itself, would choose to align himself with whiteness and white supremacy even though he wouldn’t necessarily be welcome in those spaces himself. Whiteness is a hell of a drug, eh?

When Ken reveals his beloved wife was Black and had been murdered by a racist mob, Jimmy has no idea how to answer which “side” Ken was supposed to be on in that case, problematizing Jimmy’s entire belief system. The film makes this exchange strangely funny in context, but the underlying emotions are actually sadness and rage: Jimmy has perfectly isolated himself socially and culturally with his beliefs to such a degree that he has no friends and his only social contact is with drug dealers and sex workers.

But watching In Bruges again recently I also couldn’t help but notice how many Harry Potter actors star in this film. From good guys Mad-Eyed Moody (Gleeson), Fleur Delacroix (Poesy), and Aberforth Dumbledore (Ciarán Hinds) to baddies Voldemort (Fiennes) and Percival Graves/Grindelwald (Farrell), these actors are now inextricably linked to J.K. Rowling’s franchise. Rowling has recently doubled down on her disgusting transphobic beliefs as well as co-signed the Harper’s letter that essentially asks for an end to accountability when famous people, and writers in particular, say problematic things. (I refuse to link back to either of these trash statements, but a Google search will bring them right to you.) Rowling herself has been actively self-isolating along with an increasingly vocal crowd of transphobes and racists, which has had a negative ripple effect outward on former fans of her work like myself. I kept trying to stay present and focus on In Bruges, but it was simply impossible to avoid Rowling’s taint on so many peoples’ careers at this point. Like Jimmy in In Bruges, Rowling’s self-isolation is an ugly face of white cishet supremacy, and it’s going to be a long time before that stain washes out, if it ever does.

As we see with Ken, healthy self-isolation doesn’t have to be the end of the world. He enjoys the new views, he immerses himself in the history of a town he never knew about, and finds time to have a relaxing pint at the pub in spite of the terrible circumstances that brought him to Bruges in the first place. Ken shows us that appropriate self-isolation can be relaxing, educational, and even mild fun. Self-isolation is what keeps Bruges so unique and gorgeous after all.

But in the cases of Jimmy and, ancillary to In Bruges J.K. Rowling, self-isolation gets dangerous when folks do it to insulate themselves from the world around them, and in particular when it is rooted in social scourges like white supremacy or transphobia. Ray’s inability to just sit put for a mere two weeks ends up getting more innocent people killed and maimed by the end of the film, which of course brings to mind all the folks out there partying in maskless protest of COVID-19 restrictions. The destruction in their wake will be exponentially more devastating than Ray’s because they too can’t seem to park their butts at home temporarily.

In Bruges is a haunting Boschian nightmare and simultaneously a hilarious dark comedy that explores the city as much as the psyches of the characters featured. In Bruges’s fundamental theme of self-isolation gone wrong feels increasingly relevant today as political divides continue to grow dangerously, coupled with the current deadly pandemic that shows no signs of abating in America any time soon.

Fantastic Fest 2022 Review: ‘The Menu’ is a Sinister and Oddly Satisfying Take on Fine Dining