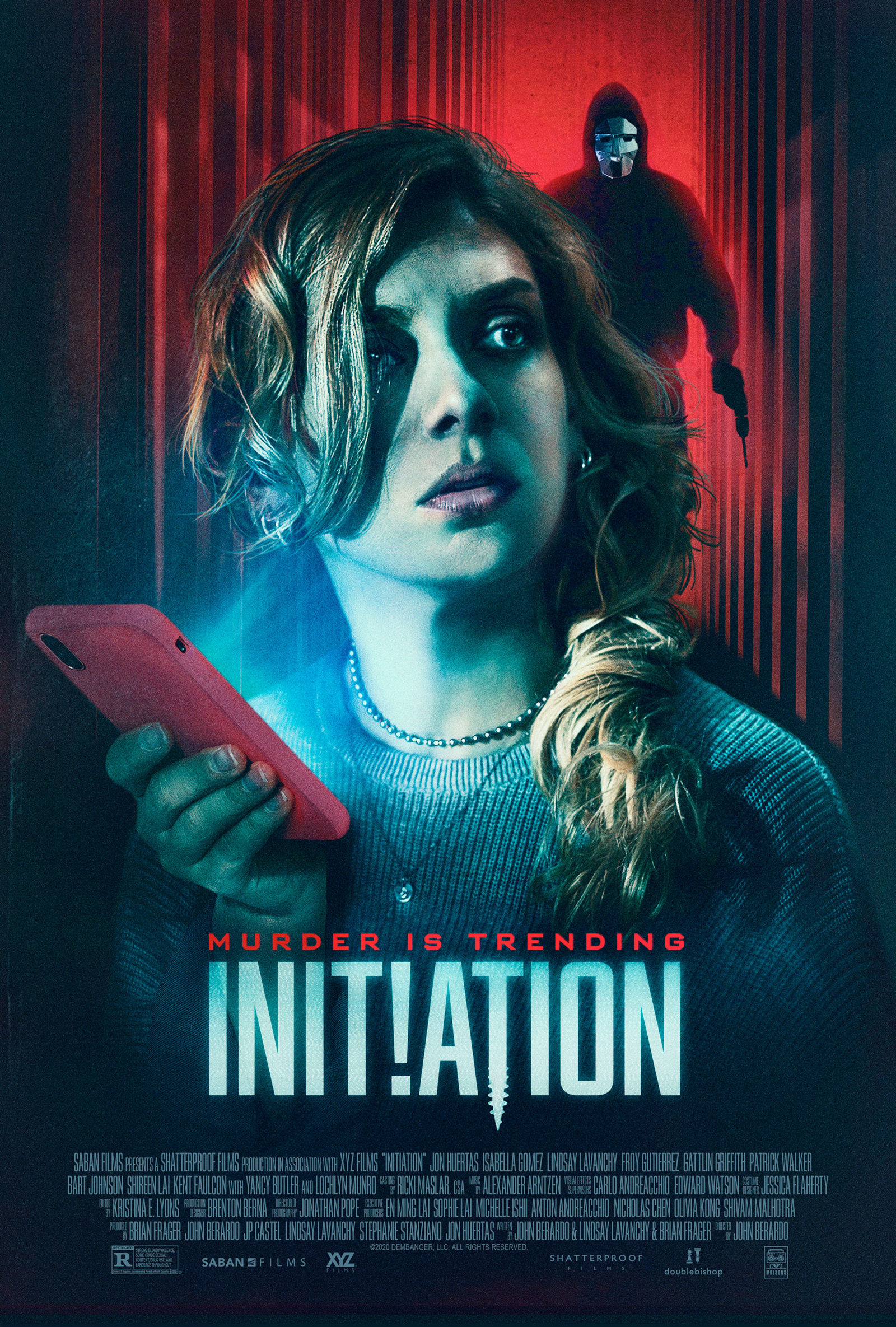 Initiation is a mystery, thriller, horror combo film that utilizes the technology of the twenty-first century to horrify modern audiences. When a frat brother is found killed in his fraternity house, the mystery of who killed him and why becomes the center focus of the film.

Initiation might just be another frat boy party gone wrong with a killer on the loose. Fraternity brothers have often been presented as meatheads and jockey guys who only care about having fun. Maybe this is why the film’s characters and its portrayal of them seems so authentic. As the story unravels the mystery behind who is killing the teens on a college campus, the answer will ultimately be a big surprise.

The film begins with an initiation to brother and sisterhood in Greek life. The first 10–15 minutes set up the movie as being a frat and sorority house party. The film is riddled with drugs and alcohol as one could expect from a teen slasher film. After a few moments of partying into the night, Ellery Scott (Lindsay LaVanchy) decides to check on her fellow sorority sister, Kylie (Isabella Gomez, One Day at a Time), who is found upstairs passed out with both Wes Scott (Froy Gutierrez), who is drunk, and Beau Vaughn (Gattlin Griffith). Ellery quickly takes her home, and the next day Kylie tells the girls something happened to her. Ellery, feeling responsible for what happened, texts her brother Wes in search of answers.

Going through Kylie’s social media page, she finds that her brother has tagged a photo with an exclamation mark. This photo included Ellery. The exclamation mark is a symbol that tags girls as sluts. From this point on, the questions start to develop further. Why would her own brother use this to tag Kylie? Why has the campus administration not put a stop to this? Has this happened before?

The plot of this film follows that of films in the horror genre: teens making bad decisions, like going down to a basement when they should be looking for an exit or hiding behind a glass wall or a small plant when they could hide under something less noticeable. What this film does well is update the horror with technology. So many teens and adults have cell phones, so it is so confusing why so many of them don’t use their phones to call for help. This story alleviates this conundrum to some degree, and maybe this is what makes this film stand out from its predecessors. It uses more commonsense reactions to dangerous situations.

While the film does have a moment or two that would cause a scare jump, it proves to be more of a cheesy fun movie night than a typical horror film. Director and writer John Berardo with the help of producer Jon Huertas make this film centered around women. The women of this film really make and push this story forward. Shayleen Zhou (Shireen Lai) plays the supporting role, but eventually takes on a more essential role when she takes charge through the film and tries to survive no matter what. Through the story, Ellery does not seem phased by the creepy guys that are around her. Her character seems to be determined to find out what has happened to her sorority sister. Kylie’s performance is really something to marvel at. Coming from a comedy background, she slides right into her role in a slasher film as easily as she’s done with comedy. These tag team trio ladies upstage their male counterparts in every scene they are in.

The men are seen as unreliable scared teens who are flat characters. Wes Scott, Beau Vaughn, and Malik (Patrick Walker) are the male leads of the story. Even when they are on screen their performances seem lackluster when compared to their female counterparts. Wes is presented as the golden boy with a bright athletic future. While his time on screen is short, it does leave us with more questions than answers. Beau really sells his character as a frat guy who is full of skullduggery. His performance is so believable that it is hard to imagine anyone else playing his role. (Audiences will get an eyeful when he changes in his room for the nude scene expected in horror films.) Malik is the only frat brother who isn’t portrayed as the other characters. His caring nature and presence in the film allows him to move ahead of the other two actors. Malik rounds out the frat stereotypes and allows for nuance to be understood through him.

The character that will surprise and astonish audiences is Rico Martinez (Jon Huertas). His performance as a police officer shines and towers all others. He is presented as a thoughtful and considerate presence on campus. His genuine concern for the safety of others colors our view. He tries to calm many of the people who have just gone through traumatic events and helps to soothe them. They feel that the murders will be solved as long as he is on the case.

Only once the party scenes end do we get to see the actors’ true skills come out. The blood and gore, horror, and mystery of the story all blend together. While the film doesn’t answer every question, it does present an enjoyable one hour and thirty-seven-minutes that can be enjoyed with friends for a cozy night in.