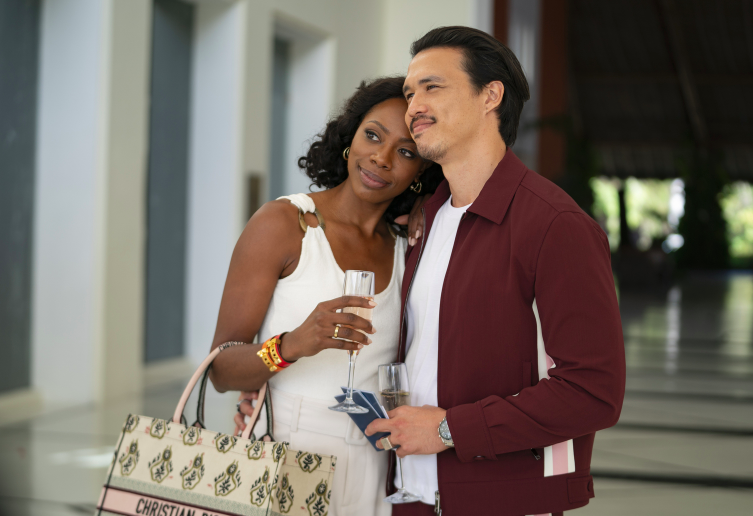 For any Insecure fans wondering if Molly (Yvonne Orji) saw Issa (Issa Rae) do an about-face instead of walking into her favorite Ethiopian restaurant last week, the answer arrived on Sunday’s episode titled, “Lowkey Trippin’.”

The installment opened with Molly at the East African eatery trying to decide what she wanted to order. After changing her mind a couple of times and frustrating the waitress, Molly looks up at just the right moment and sees Issa get out of her car. Bracing herself for the worst, Molly tries to play it off by looking at her phone. But Issa never enters and when Molly looks up again, she spots Issa jumping in her car and speeding away. Molly’s jaw drops and kicks off an episode filled with international flavor and emotional growing pains.

The next scene features Andrew laughing and talking on Molly’s couch. He’s speaking fluent Chinese and discussing his vacation plans with his older brother Victor (Stephen Oyoung) over the phone. Just as he’s wrapping up, in walks an angry Molly with a bag of Ethiopian takeout. Andrew follows Molly to her bedroom and asks if she’s ok. “I just saw Issa,” Molly says, her voice full of frustration. “That b*tch ran away from me like I was an actual job.” Andrew asks if Molly is going to reach out and talk to Issa and Molly says no. She says their fight was Issa’s fault and Andrew struggles to hide his obviously contrary opinion. Molly then says she doesn’t want to talk about Issa anymore because they are headed to Mexico sans Issa. But before Molly can relax into tourism bliss, she gets an email saying she has one more work meeting in the morning before her and Andrew’s flight.

The next morning, Molly heads into the office and realizes she didn’t pack her lotion so she asks Andrew to grab some for her. And she’s totally right, by the way. Hotel lotion doesn’t work on non-white skin. After Molly gets situated, she asks her assistant Karen (Donielle Artese) why she didn’t hear about the work meeting until the last minute. Karen apologizes and says the office has been crazy because of the big case the firm just won. Molly politely checks Karen and Karen promises to do better next time. Molly handles her business and rushes to LAX, barely making her flight because of her ancient and chatty Uber driver. An anxious Andrew meets Molly at the gate and they grab their seats on the plane. Before they can focus on each other, a passenger named Mabel (Kim Fields) asks them if they’re headed to Mexico. When Molly tells her they’re all on a plane headed to Mexico, Mabel overshares and says not only has she been on the wrong plane before, but she was in the wrong marriage for 25 years. Overcome with bad memories of her ex-husband, a teary Mabel jumps up and runs to the restroom. Happy to be alone at last, Molly and Andrew enjoy their in-flight drinks and snacks as well as a little kissing and under-the-cover sexual exploration. Hey now!

The plane lands and the happy couple jumps in a car which takes them straight to their ritzy Puerto Vallarta resort. Molly shows off some of her Spanish speaking skills to the hotel staff just before she and Andrew meet up with his older brother Victor and Victor’s wife Lydia (Camille Chen) in the lobby. Lydia showers Molly with awkward compliments and Victor wastes no time peppering Andrew and Molly with his group plans for the rest of the evening. Victor’s plans include pool-side massages and guacamole followed by dinner at a popular ceviche spot but Andrew and Molly have, um, steamier plans in their spacious room…as well as the balcony. In addition to Molly and Andrew’s sexy time, which includes lingerie and toys, Looking for LaToya is available on Mexican television. Adios, Victor and Lydia.

Needless to say, Andrew and Molly never met up with Victor and Lydia and instead convene with them in the morning for a hike with amazing views and ziplining. On the way up to the hike, the group even runs into crazy Mabel. The foursome heads out for dancing at night and Molly admits that Victor’s over-planning isn’t all bad. While unpacking the day during their chat, Andrew’s phone rings and it’s Nathan (Kendrick Sampson). He can’t get out of the garage back at home and asks where his roommate Andrew’s extra clicker is. Turns out Issa is with Nathan and when Molly overhears her voice in the background, she quickly launches into attack and judgement mode. But Nathan is Andrew’s boy so he sets the record straight and explains that when Nathan ghosted Issa in the past, he was dealing with mental health issues. Molly wonders if Issa knows about Nathan’s psychological baggage but Andrew reminds her that this vacation isn’t about their friends who aren’t there. It’s about them. Things get steamy again and a tied up, blindfolded Andrew does freaky things with Molly with his mouth and her booty. Ahhh! Andrew is the MVP of not just Insecure but all of TV.

Cut to the next morning and Andrew, Molly and Lydia are in the pool having a good time. Someone accidentally splashes water in Lydia’s eyes and she’s wearing contacts unfortunately. Molly rushes to help Lydia and jumps out of the pool to get Lydia a towel. At the towel stand, the hotel employee lets a white couple take away a gang of towels. But when it is Molly’s turn, the employee tells Molly she needs to see her hotel keycard in order to give her a towel. Just as Molly is about to rightfully cuss old girl out, Victor comes up and flashes his keycard. The employee hands the towel to Victor and Molly snatches it from him angrily and takes the towel to Lydia. Andrew can tell something is amiss when Molly and Victor return to the pool. Molly says the towel lady was being “selectively racist” and Victor stupidly decides to turn it into a social debate and questions whether or not the towel lady was actually being racist. Molly tosses out an accusation about Asians picking and choosing when they are people of color and Andrew says that’s not true. Molly tells Andrew he’s the exception and Victor digs a deeper hole because of his desire to play Devil’s Advocate and insults Molly more. She tells Andrew to check his brother and she bounces. Sigh. Looks like there won’t be any sexy loving this evening.

When Molly wakes up the next morning, she realizes Andrew let her sleep in. He greets her bearing the gift of smoothies and tells her that he also talked to Victor, who sends his apologies for being insensitive. At the same time, the excursions Victor had planned for the day are a no go and Molly worries that her outspokenness, though warranted, has ruined the vacation. Andrew assures her that they will find a peaceful middle ground with Victor and Molly uses the alone time to reflect. She leaves a voicemail for her therapist Dr. Rhonda (Denise Dowse) to schedule an appointment. This is what emotional growth looks and feels like and Molly knows she needs help with the way she handles anger. Also, who made Molly’s swimsuit in this scene because it is fuego? In fact, her whole vacation wardrobe is dope af.

Molly and Andrew fly home the next day and spot Mabel at the airport, and it looks like she made a new love connection. The pair also accidentally run into Lawrence (Jay Ellis, who also directed the episode) and Molly awkwardly introduces him to her boyfriend Andrew. Lawrence walks away and calls someone. Is it Issa? Looks like it but what does that mean? We’ll have to wait and find out.

Insecure airs Sundays on HBO at 10 p.m. ET/PT. See you again next week!