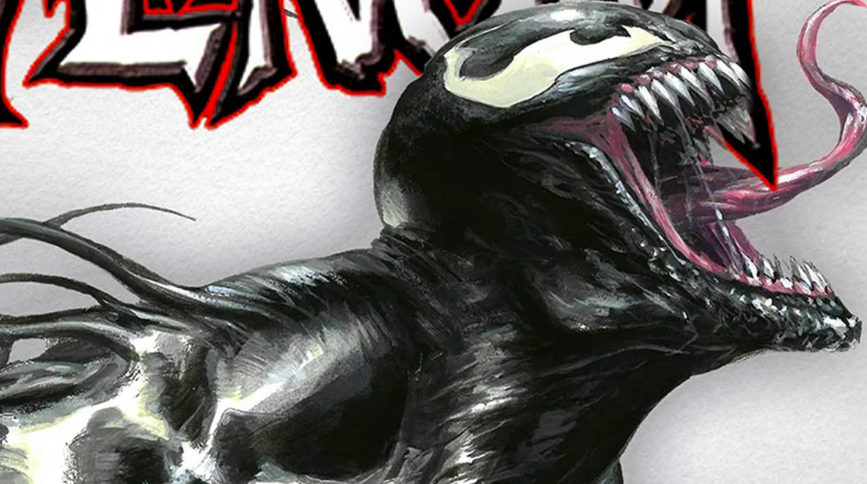 From Titan Books comes James R. Tuck’s adaptation of the 1993 Limited Series Venom: Lethal Protector.  The concept of Venom was first seen in issue 252 of The Amazing Spider-Man. At first, the Venom symbiote manifested its consciousness in subtle ways as Peter Parker’s new costume.  Those manifestations affecting his natural tendencies, eventually leading him to recognize that the symbiote was sentient and not always on the side of the angels.

Peter’s efforts to free himself of the symbiote, eventually resulted in merging with its most well-known host Eddie Brock.  Venom/Brock and Peter Parker have a long and storied history.  Mostly as enemies, but at times they have worked together in uneasy alliances.  This story is one of those.  Venom/Brock have “left” New York and settled on the west coast, under an agreement to curb their behavior.  The question is whether Venom/Brock can maintain the agreement in light of the presence of hitman out to kill them.

The author James R. Tuck is no rookie when it comes to writing fantasy.  Tuck’s works include a series of books following the travails of occult bounty hunter Deacon Chalk. BGN reached out to the author to ask a few questions about his foray into the Marvel Universe. 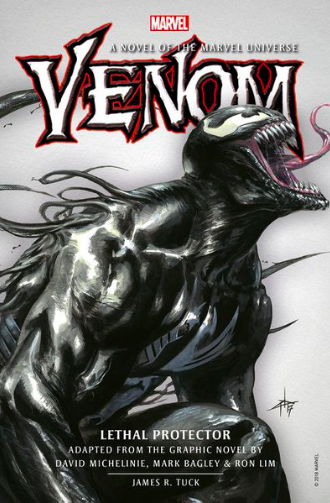 What was your first introduction to Venom?

I’ve been a comic book fanboy my entire life, so I was there in the beginning. I read the issue where Spider-Man gets the black costume in Secret Wars and then on into the regular series where he discovers it is alive and his fight to remove it. I read the origin of Venom as it hit the comic book stands.

Your previous works put you in the world of the occult, did you find the alien symbiote super-hero world different?

Somewhat. Almost all of my work, outside of the crime fiction, includes some form of hero. My first series, the Deacon Chalk books, Jonathan Maberry said was a comic book in novel form.  I also wrote the Arrow tie-in FATAL LEGACIES just before. But truthfully, some of Venom’s characteristics are closely mirrored in a lot of the occult-based novels I have written. Take out the other superhero trappings and he could fit right into the Mythos War trilogy I write as Levi Black.

Do you think Eddie and Venom will remain heroes?

In the comic books and movies? Most likely. Marvel may let a bit more darkness in, but I think they will always keep them as anti-heroes, keeping some form of trying to be noble and good.

There is a dimensionality that your adaptation adds to the Lethal Protector story.  Where did you need to take some liberty away from the graphic novel, to explain the character or advance the story?

The graphic novel is great and relies on the art to really flesh out the story, but because of the nature of sequential art and storytelling, there were some spots that needed some fill in. Plus, I got to dig into the characters, especially Spider-Man, and add some texture that I’ve always felt should be there.

Like the fact that Spider-Man’s mask has HUGE eyeholes so he can see with his peripheral vision, which is essential when swinging through a city like New York. It’s a practical thing. And yet the huge eyes and no mouth of the costume are unsettling to some people when they talk to him face to face. It seems almost alien.

For those who have read the graphic novel, why should they pick up the book?

For that texture that’s been added in! Plus, it’s a good, action-packed superhero yarn.

Over the years, the Marvel Cinematic Universe has done a fairly good job staying true to the comic universe, when it comes to Venom.  The recent Venom movie kept many elements the same but ignored the symbiotic relationship between Eddie Brock and Peter Parker.  However, the movie does an excellent job of reflecting the synergetic relationship between Brock and Venom.  Tuck’s book takes the reader a step further to not only show the interdependency between Venom and Brock, but also their victims and those they save.  For those of you who love the comic anti-hero and are looking to explore the psyche of Venom even more — this is a good choice.  Venom: Lethal Protector is sold by Titan Books and is out now.

E.Angel is an engineer and holds a BS in electrical engineering from North Carolina A&T State University. In her spare time she works at her comic book store – Brainstorm Comics and Gaming – when she is not reading comic books. She’s a real nerd who loves all things Star Wars and Star Trek, and is an avid gamer. E.Angel can be reached at e9of10@gmail.com or on either game platform as Bunnehs Sister.

Get More of Tom Hardy in the ‘Venom’ Home Release Dec. 11