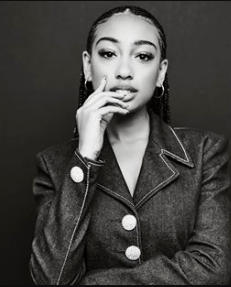 Starring in the upcoming Hulu series, Little Fires Everywhere, Lexi Underwood plays Pearl Warren, the daughter of Mia Warren (Kerry Washington) in the mini-series adaptation based on the 2017 novel by Celeste Ng.

The story examines the conflicting dynamic of two mothers Mia and Elena Richardson (Reese Witherspoon) and their entangled lives. Elena is a rule-follower who is raising her family in Shaker Heights, an affluent planned neighborhood in Ohio, while Mia is artistic, nomadic, and mysterious. The story ultimately forces you to challenge and question your moralities when these two opposing ideals conflict. BGN had the opportunity to sit down and chat with Lexi Underwood about Little Fires Everywhere to discuss the themes of identity and ethics.

Could you give a synopsis of who your character is?

I play Pearl Warren, a 15-year-old girl who has spent her whole entire life traveling with her mother, Mia. She’s never really known why she has to constantly go back and forth between places, but she’s been accustomed to it ever since she was a baby. She is smart. She is brilliant, and she’s beautiful. She’s done much more than what her mother and the people around her think she has, and she knows what she’s doing. She’s very intuitive. She’s always craved a normal life.

So when she goes to Shaker Heights, Ohio, and she meets the Richardson family, and sees how they live, she immediately becomes infatuated with them and everything that they stand for. Actually Shaker Heights is the first planned neighborhood in America, and Elena Richardson is a big rule-follower, so Shaker Heights has all of these rules of certain things that you have to do. Pearl believed that if she follows those rules and acts and dresses like the Richardsons, then maybe one day she can actually live the life that she believes the Richardsons have.

What was it like working with Kerry Washington and Reese Witherspoon?

It was like a dream come true. I mean, it was Kerry Washington. I was 15 at the time that we started this whole thing. Honestly, it was interesting to be in an arena with two icons that have been in the game for so long. I couldn’t believe that I get to do that.

They’re just both incredibly talented. Something that I admire about both of them is that they’re about not only making sure they look good, but making sure that everyone will benefit. They’re very serving actors. It’s rare sometimes to come around those types of actors who have been in the game for so long but are incredibly giving. Kerry was one of the actors who inspired me to become an actor. Growing up there weren’t many Black actors on television who looked like me, or even strong female leads on TV. For me to grow up with Kerry Washington on TV has been  super inspiring. To be able to play her daughter was something that I never could have dreamed or imagined in my years of living.

Can you walk the readers through your past in the entertainment industry?

I was born and raised in Washington, DC. Growing up, I was always in love with the arts, but I was super shy. I was in ballet lessons and singing lessons. I took acting classes as a hobby, and I knew that’s what I wanted to do when I grew up, but it was never really at the top of my list to become a child actor.

My very first thing that I ever did was playing in A Christmas Carol at Ford Theatre at 9 years old. That was the best thing ever to me. I was super excited, and I told all my friends. I thought that was the best thing that I could have ever booked. Right after I did that, I found a manager and an agent through a talent showcase that my dad found out about at work. Then I went to LA with no type of acting experience to meet my previous agent. A year later, I ended up booking Young Nala on the Lion King tour. I did that for about 8 months, and then I moved to Broadway for a month at age 11. Then, with a big leap of faith, we moved to LA.

That was super big because I was leaving everything behind and I didn’t have  a guaranteed project or anything. I was just going out there and hoping that something big would happen, that I would book something. Little Fires Everywhere is actually my first major role. I did guest-star roles, but that whole time I was just trying to get a recurring role in a TV series. This whole journey has been incredible, and I’m so grateful for Kerry because she’s taken me under her wing; Reese as well. When I was trying to get my publicist or if I just needed advice, they were there to help. They were super helpful for all of the kids.

Do you have any sort of similarities to your character at all?

I think that no matter what race you are, no matter where you live. or what your background is, all teenagers can relate to at least one of the characters on the show. The major thing in the book is you don’t necessarily know what race Pearl and Mia are. For me, the biggest thing was probably just the authentic Black mother and daughter relationship that Kerry and I created. The first time that you see Mia’s world is an encounter with the police, which I think is something super powerful because I feel it really captures the essence of what it’s like to be Black in America, no matter what time period it is. For me, I can; and a lot of Black teenagers can relate to that too. My dad had to have the talk with me. I’m sure a lot of Black kids had to have the talk when it comes to police brutality. I feel like that’s the number one thing. Also, just a sense of trying to find yourself and struggling with your identity. I think those are big things that all teens struggle with growing up, especially now when you have social media. Pearl is going through those identity issues back in the 1990s by going to this fancy school. All these kids are dressed up in nice clothes and they’re sharing things that Pearl has never been able to do, so I feel like that’s something else that I can really identify with.

What would you say to people who haven’t watched the series yet?

Be open to changes, because there are changes. Don’t be too harsh, since it’s hard to do adaptations of books. Sometimes people don’t always nail it, but I feel like we did a super good job of staying authentic to the story. But, not everything is the same. We took things and elevated them a little.