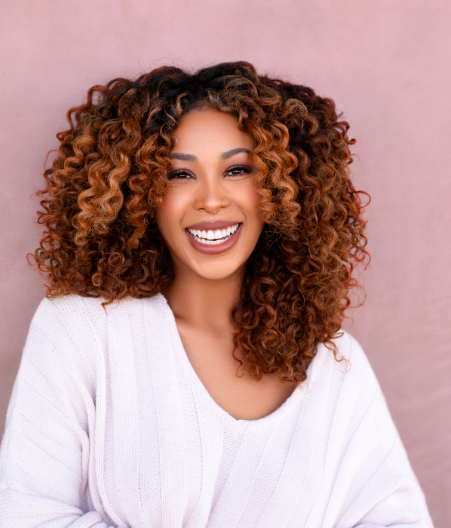 BGN had the opportunity to talk to the effervescent and multitalented Skye Townsend about her experience as one of the leads this season.

When you were in the audition process, prepping for the show, did you know that your character would be taking Robin’s place during the apocalypse in the sequence of the main narrative sketches?

I had no idea! When I saw the script, I was like, “We’re about to have so much fun!” I laughed hysterically when I [first read it]. We all auditioned for each and every part on the show, and depending on who made sense for what, the roles were assigned.

How was it for you and your fellow co-stars navigating filming during this past year of COVID-19? But I also want to know what was enjoyable about it, too.

So when we finally got to set, it was difficult because we had to keep distance at all times. It was a lot less interacting. But we knew we were protected. I know a lot of friends on shows who panicked every day because they weren’t being taken care of. It was a blessing that HBO took so much time.

It wears on you to make sure you’re staying healthy the entire time. If one of us got sick the entire production would have to shut down.

What made your production team’s COVID-19 regulation standards much clearer and at a higher standard than what your fellow actors have to go through on other sets?

We had an entire COVID team. There were at least twenty people in the department who made sure that we stayed healthy and gave us guidelines and speeches. But we were also tested every day. Sometimes more than once a day. Some shows test you Monday and hope you stay good until Thursday.

A lot of people who had health complications were risking their life to shoot this show. It was really beautiful how much they cared about our health.

It was great to see that your favorite character you played was Marquita, in the sketch “Hear Me Out.” I met people like that, and that’s what makes it funny.

That one is the quirkiest character I played. With that character they gave me full creative control to put her together head to toe. I wanted her to have freckles, I knew her bangs had to be way too short, I knew she wanted to be frazzled all the time. It’s very interesting because I sometimes pull inspiration from voices from music. I grew up listening to a lot of Paramore and a lot of rockers. It’s awesome I got to create her from the ground up because what a lot of people don’t know is we get to pitch ideas.

Have you considered writing at some point? You sing, you have acted in different genres of television, you’re acting in comedy right now. Would you be interested in writing for a series?

I think eventually I would like to dabble in it. I just have to pace myself because I do so much creatively, sometimes I get overwhelmed and I don’t finish them.

Yeah! So I think it’s just taking the time to master it and hone it in. That’s one thing that really bothers me: when artists just jump into stuff prematurely before doing their homework.

What was your favorite sketch storyline to act in for Season 2 whether it aired already or not?

“Get Your Life” where I play Omarion’s wife. That was so much fun because I was so obsessed with B2K as a little girl, so it was full circle. It was an awesome moment; we had so much fun. He’s really talented as an actor.

Were there other moments on set with guest stars where you thought, “Oh my goodness, I’ve been a fan for so long, and now I’m working with you—how is this happening?”

I got to work with Kim Wayans. That sketch hasn’t come out yet, but it’s such a funny sketch. She’s always down to play and go big. I love that in a comedian: the willingness to take risks and be bold.

What are you excited for viewers to discover for you and your co-stars this season? Anything “suspish” (a word used to describe her main character) we should know?

I’m excited that I’m the one shaking it up! I’m okay being the suspish one [this season] because I am a little suspish. I’m excited for them to see how the entire season unravels. Even the opening credits’ storyline changes every single episode.

Can you tell me more about your process of creating characters as well as the overall transformations?

I like to do these really extensive mood boards where I decide how they dress and how they talk. Most sketch shows assign you the character, tell you how they sound, and that’s what you have to do. On this show, to ask “What if we try this?” is really beautiful. [Creating a character is] assigning a personality to yourself and shifting through that by the day. Hopefully [my co-stars and I] represent so many different types of Black women.

The hair department, makeup, everybody deserves an Emmy! We have not reused a single wig for this entire season. They involved our natural hair a lot, which was amazing! Usually as a Black actress when you go to set, you panic. It was a beautiful process to just exhale and know that we were in good hands.

Are there any hopes for Season 3?

I don’t know. We shall see. I hope so! I feel like we really came hard Season 2, and there’s noticeable growth in the show. I know that was a big priority for Robin.

Be sure to check out Skye and Reyna Biddy’s podcast Unpack N Bounce Back. They address non-linear healing, wellness, and navigating being single while including natural humor in their conversations.

A Black Lady Sketch Show airs on Fridays on HBO.