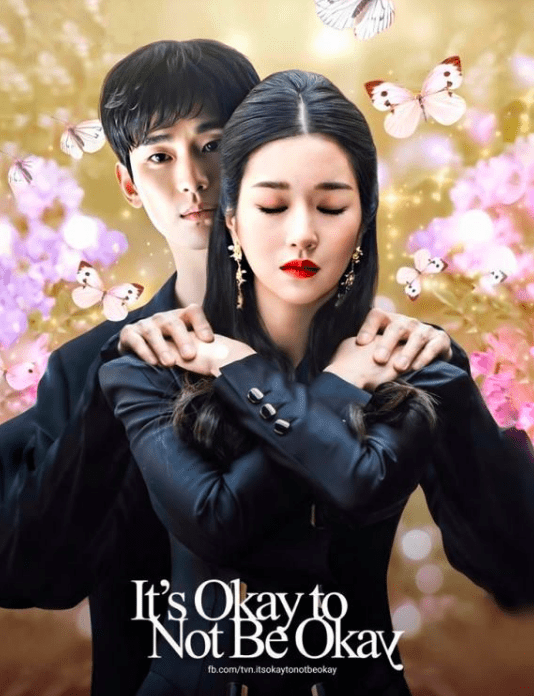 It’s Okay Not to Be Okay does something that many shows, let alone K Dramas, seldom succeed in doing — it depicts disability and mental health in a positive and compelling way.

They unravel and help to heal each other’s psychological and emotional wounds while challenging the societal stigmas surrounding mental health and relationships.

The show airs on tvN every Saturday and Sunday and became available to stream worldwide on Netflix starting in June 2020.

Throughout the show, Gang-tae’s and Ko Moon-young’s pasts are revealed to have a connection and reflect many tragic realities from their lives.

From an analysis of the autism spectrum, bipolar disorder, and alcoholism to PTSD, child abuse, neglect, and more, this show covers so many dynamic walks of life without tokenizing them.

The characters are humorous yet relatable for many audiences. Mental health in mainstream Korean and American culture isn’t usually the main focus in dramas or soap opera (unless they’re performed melodramatically), but in It’s Okay Not to Be Okay, emotional wounds are fully and authentically embraced within a diversity of people.

Ko Moon-young is particularly interesting when it comes to the show’s depiction of mental and emotional health. On the outside, she is very attractive, dresses very fashionably, and works as children’s author. The show often makes a point of having other characters comment on her outer beauty and fame.

However, when it comes to her emotional trauma, Moon-young is volatile, obsessive, and possessive. She takes what she wants without recognizing the pain of others, not because she is heartless, but because she has a personality disorder that makes it harder for her to read people.

Viewers are invited into OK Psychiatric Hospital where they meet a cast of both staff and patients who are engaging, entertaining, and never have a dull moment.

The psychiatric hospital is in a visually stunning area that overlooks the sea and is surrounded by beautiful flowers. Much like many of the mystical themes of the show, there is a unique charm and magic to the hospital.

The show draws inspiration from many famous children’s stories, like Rapunzel, Bluebeard, Beauty and the Beast, and more to explain many of the show’s major themes.

One theme is that Ko Moon-young is cursed by a dark fate she cannot escape. This is often how those suffering from trauma may feel about the weight of their burdens.

In many ways, her curse is the physical manifestation of her traumatic childhood that she wishes to free herself from but has no idea how. The show is a quirky and poetic ode to freeing yourself from inner pain and destabilizing pasts, and fans are all for it.

The show does a masterful job of showing subtle shifts in Ko Moon-young’s development as, with the help of Gang-tae, she begins to see herself and others clearly for the first time.

As the series progresses, it shows both the pain and victory of what it means to face one’s darkest demons and dare to exorcise them.

One of the most interesting and compelling aspects of the show is Gang-tae’s autistic older brother, Moon Sang-tae, and their childhood and adult experiences.

The character Sang-tae illustrates the difficulties that people with special needs experience as well as how they are people with a multiplicity of interests and knowledge.

Sang-tae may have a hard time communicating with others and avoiding tantrums, but he also knows everything there is to know about dinosaurs and has a love for art.

Like Ko Moon-young, Sang-tae just wants to authentically be himself, but feels haunted by things that have happened in his past.

A common theme throughout the series is butterflies. There is so much butterfly symbolism that it may take a few watches for some audiences to identify and understand them.

However, there are two that are most apparent. First, Sang-tae has nightmares about butterflies trying to chase and attack him. These vivid dreams are what prompt him and his brother to keep moving from place to place, in an effort to escape the butterflies.

Second, Ko Moon-young tears the wings off butterflies and scares the once enamored Gang-tae away with her cruelty when they were children.

The storybook lore on the first episode suggested that Ko Moon-young was cursed to do malicious things even with the best intentions and the desire for love.

Both Sang-tae and Ko Moon-young want to escape the butterflies in their lives, and they both decide to depend on Gang-tae to protect them.

There is an undue burden on Gang-tae that reflects one of the common reactions that people have to trauma — shutting down.

He is a character who smiles when he’s not happy and does kind things even if he is hurt. He literally and figurately saves face when he is hurting inside in order to reassure others, especially Sang-tae.

His story adds to the larger discussion of caregivers and those who support family members and loved ones with special needs.

Gang-tae becomes so selfless that he forgets who he is or what it means to have selfhood. Despite Ko Moon-Young’s antisocial personality disorder, she is able to see Gang-tae clearly.

When he smiles, but is actually sad, she playfully calls him on it. Albeit in an unconventional and stalkerish way, the two of them create a romantic discourse that has rarely, if ever, been depicted in such a dynamic way.

The show isn’t afraid to raise bold questions about the way able-bodied society tries to silence, erase, and minimize those with mental health issue.

Each of the characters, whether they are patients at the psychiatric ward or not, show that there is imbalance and cognitive dissonance in everyone and being “normal” isn’t indicative of being a good person.

It’s Okay Not to Be Okay is tenacious as it implores everyone to scream their experiences from the mountain tops and stop suppressing what is painful. It is truly a beautiful ode to allowing ourselves catharsis while accepting the pain that it is to be truly human.

American Remake of The Good Doctor Picked up by ABC