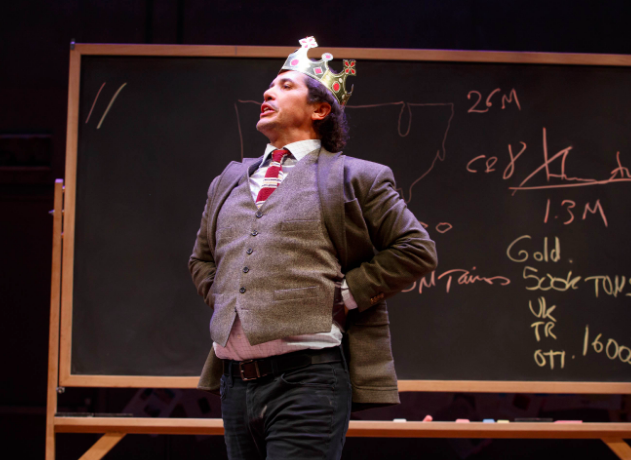 Talented actor and comedian John Leguizamo wrote and performed in Latin History for Morons. He opened his Broadway show by touching on the issue of his son being bullied by a classmate, a parent’s nightmare. Leguizamo had to put an end to this problem, but with his own approach. This vibrant and humorous one-man show was nominated for the 2018 Tony Award for Best Play, and he received a special Tony award for his intriguing Latin theater works within his vibrant career.

Leguizamo learned that his son faced a bullying issue prior to the global pandemic that at one point became a physical attack after the verbal assaults. So how would Leguizamo settle his son’s issue? Well, there are a number of things he had to do — some of them were trial and error, but he found more than he had bargained for, from tracing his biological roots in therapy sessions to the hidden truth.

Leguizamo makes it perfectly clear that he wouldn’t give up on his son during his time of need (like most parents). Leguizamo had to excavate deeper, tracing the secret Latin history from thousands of years ago.

Why is this relatable to his son’s bully? Because public and private schools have expunged Latinos from American history while utilizing white supremacy class textbooks. Therefore, multicultural students have not been educated well, causing white supremacy and racism towards Latinos. In Latin History for Morons, “Professor” Leguizamo lectures on what schools didn’t teach in the past, how Latinos were hated, how Latinos fought in American wars, and how the Latino culture outlived that juxtaposition of his son’s oppression while in school. Still, Leguizamo was shocked at how his middle schooler became victorious. Amongst these serious points, he incorporated nonstop humor throughout his fascinating show.

Many parents dread the notion of bullying in schools, and no parent wants their child to be bullied. It can affect their mentality, their personality, and their grades. In addition, most parents don’t want their child to be the bully, either. According to Dr. Denis G. Sukhodolsky in the article “Why Kids Become Bullies” (Yale Medicine), “The adverse health effects of bullying may be more harmful, overall, than having been mistreated by an adult as a child, according to some studies. Others link a history of being bullied with lower lifelong income and a poorer quality of life.”

So, why do children bully other children? Dr. Sukhodolsky writes, “Bullies feel the negative effects of their behavior” on their victims, citing as examples confusion, embarrassment, and social isolation. Many bullies do not know how else to behave. “Nobody in their lives has explained to them what it means to hurt another person’s feelings.” Parents must bring more awareness by communicating with their children and by preventing children from being hurt mentally or physically.

How do public schools handle this matter without the victim’s parents meeting with the bully’s parents? In this reporter’s experience working in a public middle school, school counselors created a mediation program to determine the problem and counsel students to become better people. At times, if there were more than three students found within the same conflict, they would be placed in different sessions.

I can say that it was a very popular program for sixth through eighth graders. For the final step, school counselors notified all of the students’ parents involved. If any student defies intervention and continues bullying or instigating, the counselor refers the student to the assistant principal for another session that includes the parents for immediate suspension.

How many more public schools practice programs similar to this mediation program to solve or prevent students bullying others? This is a challenging question. Now with this inescapable pandemic, parents hope that student/student maltreatment has been decreased or eradicated due to virtual learning, and that it will stay gone after isolation rules are lifted.

The U.S. Department of State also celebrates by recognizing Latinos employed by the government in different fields and making a difference in America. In addition, there’s the first ever Hispanic and Latina Sonia Sotomayor to become an Associate Justice of the Supreme Court. She was nominated by former President Barack Obama in 2009, and the Senate confirmed for her to take this position. She concentrates on defendants’ rights, reforming the criminal justice system, and voicing concerns on race, gender, and ethnic identity.

To this day, Latinos continue to be oppressed in America. However, there has been a reform for Latinos in the twenty-first century. President Obama and his administration generated a program called Deferred Action for Childhood Arrivals (DACA) in 2012. This unique program is beneficial to any undocumented child or juvenile immigrant who has lived in America over a handful of years. They can attend a college or a university and have a job without being deported. Applications must be submitted every two years and wait for an approval.

There have been minor modifications to DACA in the past few years. But, the most alarming news for many immigrants took place in 2017, when our current President Donald Trump and his administration first announced their intention to terminate DACA permanently. Meanwhile, the program has been postponed since 2018. Now, in 2020, this has been a recurring and dreaded issue for the undocumented people in America, and the applicants’ statuses are on hold.

Leguizamo’s brilliant project on Latin History for Morons shined a light on chronic issues that still exist today. When will America reshape equality for all minority groups?