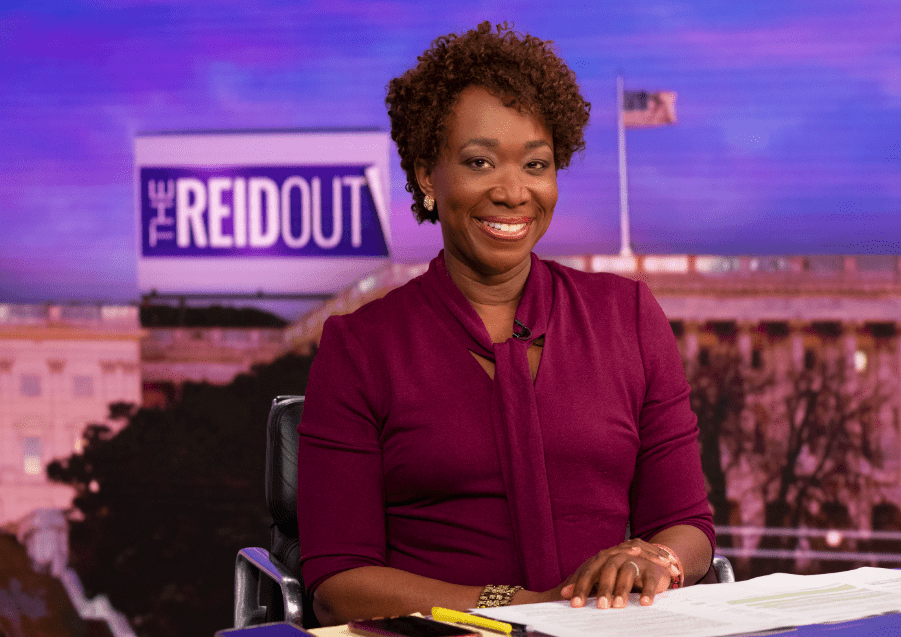 Joy Reid made a little bit of history last month by becoming the first Black female to host her own talk show, The Reidout on MSNBC. If you’re a Twitter fan, you already know Reid is not afraid to speak her truth. BGN was thrilled to sit down with her (from a distance) to discuss her ideas on the news, America, and Twitter.

You got a degree in film and started your career in business. Was journalism always the goal?

Oh, it definitely was. I’ve been a Black girl nerd my whole life. As a kid I was very fixated on the news and I used to ask my mom if I could stay up late and watch Nightline. I got obsessed. I started off watching a special on the hostage crisis, and it became Nightline, so I was a Ted Koppel fan as a sixth/seventh grader.

News was a great way to see the world. I still remember Bryant Gumbel and the Today Show went to the Congo. My father was Congolese, but we’d never been there or seen it. I saw it through The Today Show. So I’ve always loved news. I didn’t have it as a life plan when I was younger. My plan was to be a doctor. But I always thought, “I’ll be a doctor but I will write history books on the side.”

I’ve always wanted to be a writer, and I’ve wanted writing to be a part of my career. So in a way, I was always planning for it without planning for it.

You’ve tackled other subjects besides politics and cultural affairs. What do you think made those stick?

For me, I was that kid that watched Meet The Press and David Brinkley, because I was just fascinated by the world. We traveled a lot by car. My mom would do these epic road trips. We even drove all the way to Oaxaca, Mexico, one summer. We stayed there a couple of months because she was working on a book with her colleague. We were adventurous kids and we grew up in a house full of adventure.

I loved the news because it was a way to experience the world outside of my little town of Montbello in Denver.

In journalism and in politics, having a voice is important, but on Twitter it can get you canceled. What are your thoughts on the pros and cons of tweeting?

It’s a great aggregator of information, but it’s also a place where people torment people and bully and harass people. I also know that it was a place in 2016 where Russia was able to play a lot of games, particularly with Black women’s votes and younger Black folk’s votes to try to game the system by using fake people bots and misinformation to distract us from voting. Twitter is like any tool. It can either be a really wondrous gift or it can be a curse. It depends on how you use it.

Can you speak to the appellate court’s overturning the ruling in the libel case?

I’m not going to comment on that because we’re still in the middle of that case. I will say that we are going to fight that case with everything we’ve got. We disagreed with the ruling, my lawyer and I, and we have an organization that supports journalism along with us and we’re going to fight.

What are your most important intentions and hopes for your new show?

Because I am a Black woman in this position, I feel it’s important to amplify a lot of the issues that are affecting the Black community and therefore affects the country.

What issues are these? When America catches a cold, Black folk catch pneumonia. So the coronavirus crisis disproportionately affects people of color; Black, Brown, and Indigenious.

The issues about policing are not going away regardless of how the election turns out. They are still going to be important, important to me as a mother and as a wife.

The economic question, because again, the disparities are so huge. We don’t talk a lot about poverty in this country. Poverty is actually very racialized in this country, if not completely racial. There are white folk in poverty, too, and a lot of people are going to be introduced to poverty in the economic downturn because of the handling of this administration, so a lot of people are going to know what poverty is about. We’ve got to start talking about whether we have systems in place to combat it.

You recently had former Vice President Biden on, and you asked him about his plans, running mate, etc. What did you come away with from that interview?

I came away with him seeming to be truly undecided. Which surprises me because sometimes you think the answer would be so obvious. You kind of know what you want, you know what you’re looking for, you find that person. But I think he’s genuinely undecided. I don’t think that’s a fake for the media. I think he hasn’t made up his mind.

Black females are very front and center this year. How do we make this not just a moment in society that comes and goes like a trend, but what it should be, a regular part of working and thriving in America?

I think it already is. I think Black Lives Matter dates all the way back to John Lewis’s speech at the March on Washington. He was the original Black Lives Matter activist, young, a little more than a decade younger than Dr. King. SNCC [Student NonViolent Coordinating Committee] was right on the edge of the Black Power movement and ultimately the Stokely Carmichael-led SNCC was very much like Black Lives Matter.

I don’t think [the Black Power movement] has ever gone anywhere. BLM is just the latest moniker attached to it. Black Lives Matter has always had a certain effectiveness about moving people’s mindset about issues like poverty, policing, and racism, and voting.

Right now they are probably at their most effective. These kids that are on the street, they are winning. People get mad or people will say don’t defund the police, but police departments are losing funding.

Police unions in California say, “Wait, let’s give you a proposal of how we could spend your money better…”

The public is not going to allow them to spend tens of millions of dollars and not provide equal service to all of the customers, because they work for us. The police are employees of the state. The movement is winning, and the fact that a bill was in the House with George Floyd’s name on it within 30 days of his murder shows you that it’s winning. I suspect you will see more coordination of the demand, especially if Democrats take back the Senate. There’s not going to be a lot of patience in the streets for them to not make tremendous change.

In your opinion, what time is it in America?

It’s ten minutes to midnight, honestly. When Donald Trump made his inaugural speech, a lot of people called that midnight in America, because it was the polar opposite of what Ronald Reagan tried to do.

PODCAST: Getting Into America with Trymaine Lee