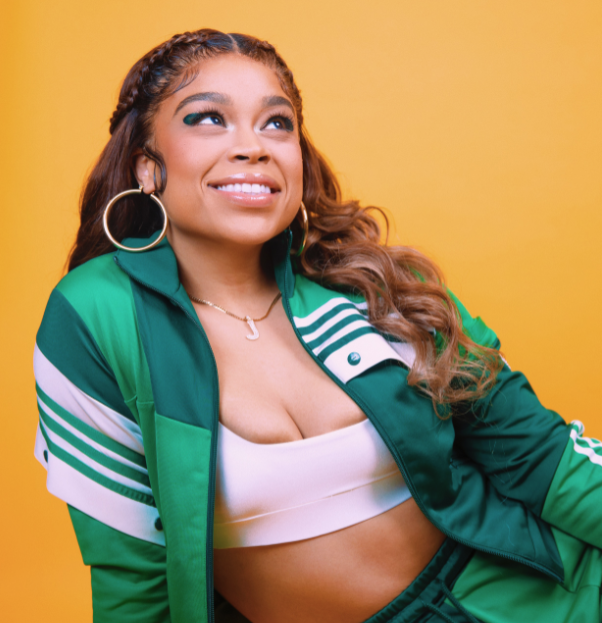 Julissa Calderon is one of those people who, within two minutes of meeting them, you feel like you know from your neighborhood. She’s quick-witted, funny, and an easy conversationalist. Having seen her in many Buzzfeed videos, I knew laughs would be imminent in the interview; however, I was happy to learn more about her endeavors both on and off screen.

Calderon has gone from producing videos to becoming part of the cast in Netflix’s hit series Gentefied. Gentefied allows us into the lives of the Morales family as they deal with family business, family drama, and gentrification in Los Angeles, California.

BGN spoke with Calderon via telephone and discussed her role on Gentefied, her upcoming series on Amazon, and her manifestation journal.

How did you go from Buzzfeed doing videos to acting in Netflix and Amazon series?

I actually was acting from the jump. I started on off-Broadway. Then I came to LA, and I just fell into videos. In the beginning, I did not want to do videos, right? I thought, “Oh, I’m gonna get stuck being this girl from the video, and that’s not what I am.” But you know what? It has helped the journey. It’s so interesting how it all works out. So many people know me from the videos, and they’re excited. It feels like they’re on the journey with me. It’s a beautiful thing. I’m glad that I was able to be so authentic that people feel that way.

How has being Afro-Latina impacted your acting journey? What difficulties have you faced because of your race?

When I first moved to LA, there were no Afro-Latina roles at all. This Afro-Latino term that we keep talking about, it’s new. It wasn’t really something that people were throwing around as often. So, it was weird coming to LA and being identified as that. In Miami, which is where I grew up, I wasn’t considered an Afro-Latina. I was just a Latina. Period. Going into auditions sometimes was very hard because they were asking for an African American girl next door. Then here I come. As soon as I start talking, they’re like, “Yeah, you’re not it.” It was definitely one of those things where you look at yourself and ask, “Well, who am I? Why don’t they know who I am?” That’s why I jumped into videos. I decided I was going to shift the narrative. I wanted to allow people to start seeing me for who I am. I was going to teach them about this culture that they clearly didn’t know about. That has helped in so many different ways in the past few years. I love that now I’m seeing many scripts that are saying Afro-Latina. That is such a big deal.

Tell us about your character on Gentefied.

Her name is Jessica Castillo, and she is a Dominican queer activist in Boyle Heights. She’s strong-willed. When people try to shake the table, she don’t move. She is in love with one of the leads of the show, who is Anna Morales, and the show is centered on the Morales family. And that’s been her girlfriend since childhood. I’m excited because I feel like in the first season she was really one-dimensional in the sense that she was very serious and she wasn’t having fun. She wasn’t laughing. In this season, you get to see her have a little bit more fun and not have so much on her shoulders.

What can you tell us about your role on Amazon’s upcoming series With Love?

My name is Annie on the show, and I play the best friend to one of the leads, played by Ron Flynn. Annie is one of those friends that is always rooting for you. She’s always gonna be in your business, she’s gonna tell it like it is, and she just leads with a lot of energy and a lot of fun. I had so much fun with this character because it was so different from Jessica in the sense that she’s cool and she laughs a lot. She’s having fun. She’s enjoying herself. She doesn’t take herself too seriously.

What inspired you to create Manifest That Sh*t, a new journal that you have released?

I’m a serial journaler. I’ve been journaling for years. I have my stack of journals that I will not throw away, and I wanted to make my way into being an entrepreneur. But I didn’t want to bring out merchandise; I didn’t want to bring out clothes. While I love fashion, that’s not what I’m about. I want to bring people something that really resonates with me. I thought of the journal and felt like it was so on brand with who I am. It’s what I do. I’m just a vessel for the world. I want people to be inspired through my work. Journaling has become my therapy. I understand that a lot of us don’t have the means to get a therapist or sometimes we just don’t feel like going to get a therapist. This journal will allow people to be able to write and to have that sense of therapy within their home. I want to continue to uplift my people, and I thought this would uplift them.

There are prompts in the journal. If you feel like there are days that you don’t really know what to write, it asks you questions. It’s very simple. If someone has never journaled before, this is a great one to use. I want people to follow their own journey so that hopefully, in the next two years or so, they look back and see what they were able to manifest. It’s such a passion project of mine. I hope that this is just the first one of many.

How did it feel to be recognized in Variety’s 10 Latinx to Watch list?

Wow. Well, first of all, it’s Variety. I know so many people had their eyes on that list, specifically because Robert Rodriguez, Zoe Saldana, and Lin-Manuel Miranda hand-picked us. Maya Angelou used to say something like — I’m paraphrasing — don’t put a lot into compliments so that it doesn’t affect you when it goes left. But those are little ways of just solidifying a lot of things that I really believe in. I know I believe in myself. I know I’m great. I know I’m amazing. I know that I have an amazing career ahead of me. But for these people who have been in this industry for so long and truly have extreme talent, for them to say, “Here is someone we believe in and someone you should look at,” that’s the ultimate compliment. It made my day when I got the call. On days you don’t feel your worthiest, those are the things that sometimes allow us to keep going.

Season 2 of Gentefied is currently available on Netflix, and With Love airs on Prime Video, December 17, 2021. You can purchase Calderon’s journal at https://www.dreamandmanifestjournal.com/.