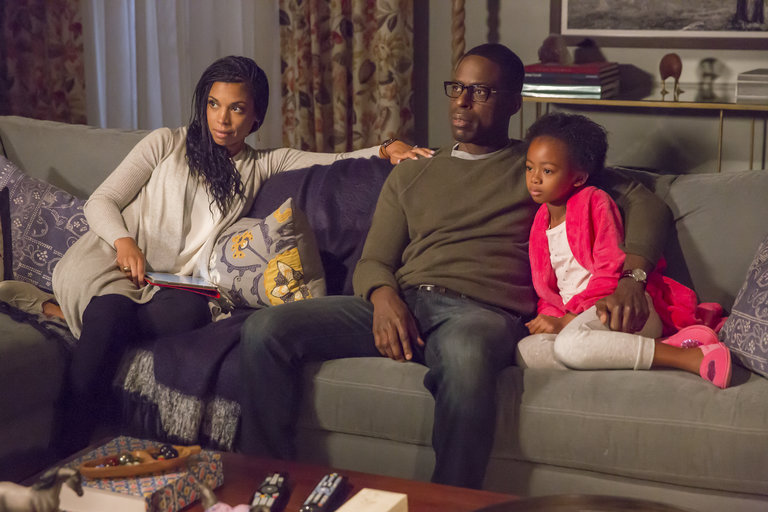 I remember exactly where I was when I realized This is Us is a closet black show. I was sitting on my couch and I was mid-way through my favorite episode of Season 1 “Memphis.” Randall, played by Emmy award-winning actor Sterling K. Brown (who is black and fine), traveled with his dying biological father, William, played flawlessly by Ron Cephas Jones (also black), to Memphis to make peace with people in his past. They walked into an old nightclub and there sat Atlanta’s Bryan Tyree Henry (bliggity black). The episode traveled through time with Afros and the blues.  It was authentic and beautiful and so familiar. Through the requisite tears (when you watch the show, it is a requirement), I realized this show is black AF.

For those of you who haven’t checked it out, the show is about The Pearsons, a white family with three children, one of whom, Randall, is adopted — and black. The show is told in present day and through flashbacks at various stages of their lives. Though I have a soft spot for Randall’s sister, Kate, played by Chrissy Metz and her adorable fiancé, Toby, played by Chris Sullivan, the heart and soul of the show clearly lie with Randall and his family. As an adult, Randall is married to Beth, played by the gorgeous Susan Kelechi Watson, and has two adorable daughters and as of this season, a foster child, Deja. The first season saw Randall through his struggles to connect with William and make peace with his adoptive mother Rebecca’s decision to keep them away from each other.  This season sees Randall and his family making a choice to adopt. Watson gives total Claire Huxtable vibes with her unapologetic and fierce portrayal of Beth. Her and Brown’s chemistry is real and off the charts. Together, they are #blackfamily goals: loving and protecting each other in a way we don’t see nearly enough on television. 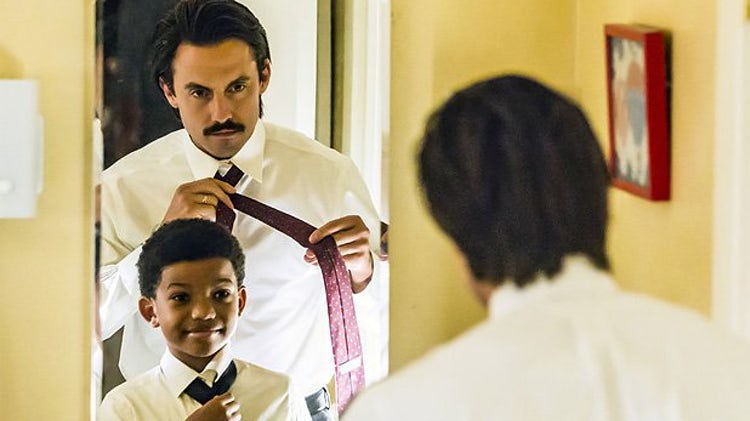 The show also delicately navigates the world of transracial adoption and race relations.  I think my fear upon learning about the premise was they would treat the adoption of a black child in a delicate, post-racial “we don’t see color” sort of way.  Thankfully, that has not been the case.  Last season, the matriarch of the Pearson family, Rebecca, played by Mandy Moore, grappled with giving her son the space to find his racial identity.  In last night’s episode, Rebecca was forced to confront her own mother for being a racist.

What I loved about the episode was how subtly it played out. Rather than having the character do something overtly racist, Rebecca’s mother’s racism was revealed in a series of subtle statements and even body language.  At one point, Rebecca’s mother gifts young Randall, who is academically gifted, a basketball saying, “everyone should have something that they’re really good at.”  She comments about how surprised she is that he (not his white siblings) was the one who got into private school.  She is noticeably disinterested in him (despite his heartbreaking efforts to gain her approval).  She also tells a story about a “lovely” black maid she once had whose English she had to constantly correct so her daughters didn’t “start speaking like street kids.” These moments culminate in Rebecca finally being forced to confront her mother.  Unfortunately, Randall overhears the confrontation and Rebecca and Jack, Randall’s adoptive father, played by Milo Ventimiglia, are forced to sit down with him and explain that his grandma is a racist.  True to the show, they don’t waste words or hesitate in diving right into the issue.  What’s even more impressive is, for the most part, they get it right.

This is likely because while showrunners Dan Fogelman, Elizabeth Berger and Isaac Aptaker are all white, they hired three black writers on a team of ten who reportedly “get a bigger voice in [race-related] stories.” Further, they give Brown and Watson room to change the dialogue to make it more authentic. For those of you who have watched, that likely makes total sense.  The only moment I found from last night’s episode that felt slightly less-than-authentic was a moment between Beth and Deja.  Last night’s episode began with Randall and Beth expressing concern over Deja’s hygiene.  Deja, their foster daughter, is having difficulty adjusting to her new home.  When Beth finally convinced Deja to allow her to do her hair, she notices she suffers from alopecia.  She tells Deja alopecia is “common in black hair.”  The comment snapped me out of the moment for just a second. What black woman refers to another black woman’s hair as “black hair”? More genuinely, she would have said “our hair.” However, I realize though the story may feel bliggity black, the intended audience is everyone.

As a horror and sci-fi fan, I always give folks a long disclaimer when I talk about This is Us.  “You should watch it,” I start. “But just know, there’s no blood, guts or katanas. No apocalypse, sex or zombie dragons. No one gets killed… well, murdered anyway.”  “It’s about a family,” I say. “A really, really amazing family.” Then I feel lame and stop talking. The thing is, in the age of The Walking Dead, Handmaid’s Tale and Game of Thrones, it’s really difficult to explain why a show about regular people navigating their regular lives resonates so deeply with this blerd. Then again, maybe that’s what all these shows are ultimately about.  Though the Pearson’s aren’t vying for any thrones or plotting to take down an evil dictator, they are navigating life which, if you live long enough, smacks the hell out of you with things like grief, illness, and heartbreak.  Whether it’s the nostalgia, the wholeness of the characters, or it’s ability to make us think it’s all about us, it works. Frankly, it’s nice to have a break from the emotional trauma of barb-wired bats and just have a good cry at the beauty of life no matter how short, no matter how long.